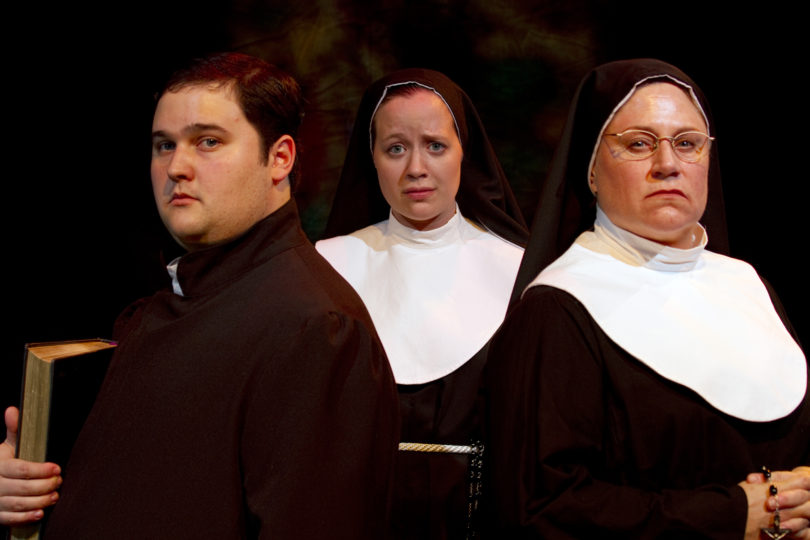 The cast of "Doubt: A Parable" includes Zack Byrd as Father Brendan Flynn

The curtain rises on University Theatre’s 81st season with Doubt: A Parable. John Patrick Shanley’s Tony Award and Pulitzer Prize winning play will be directed by Ray Paolino, an associate professor who heads the MFA acting program and is director of theatre in the Franklin College of Arts and Sciences.

“This play is about power; it catches the shifting paradigm regarding men, women, authority, tradition and rebellion, a process that continues even to this day,” Paolino said. “The play asks us to question how sure we are of anything we believe about ourselves and about the world around us.”

There will be a panel discussion after the Sept. 24 performance.

In Doubt, the year is 1964. In a parallel with the present, a new pope, Paul VI, is shaking up the Catholic Church by pushing a series of reforms, reaching out to other faiths to make the church more inclusive and vowing to “clean house” in the Vatican.

At St. Nicolas Catholic Church and School in the Bronx borough of New York City, conservative principal Sister Aloysius Beauvier, played by Kristin Kundert-Gibbs, an associate professor in the theatre and film studies department, begins to suspect the progressive Father Brendan Flynn, played by MFA performance student Zack Byrd, has had “improper relations” with one of his male students. To complicate matters further, the student is the school’s first and only African-American student. Sister Aloysius is known for being paranoid about everyone and everything, and others begin to doubt her suspicions. As the nun digs deeper and uses ever more extreme tactics to try and prove this abuse, even she becomes doubtful of whether her accusations are actually true.

As playwright Shanley suggests, “it is Doubt (so often experienced initially as weakness) that changes things. When a man feels unsteady, when he falters, when hard-won knowledge evaporates before his eyes, he’s on the verge of growth.”

“Shanley weaves the muscle, hurt and brawn of his New York roots with a stark elegance of words that evoke the best of poetry,” Paolino said. “This mixture of street and sensitivity is a strength that runs through all his work.”

Doubt opened off-Broadway in 2004, and moved to Broadway in 2005, where it was met with strong critical and audience approval. It was adapted and released in 2008 as a film starring Merryl Streep, Philip Seymour Hoffman, Amy Andrews, Viola Davis and Joseph Foster II.