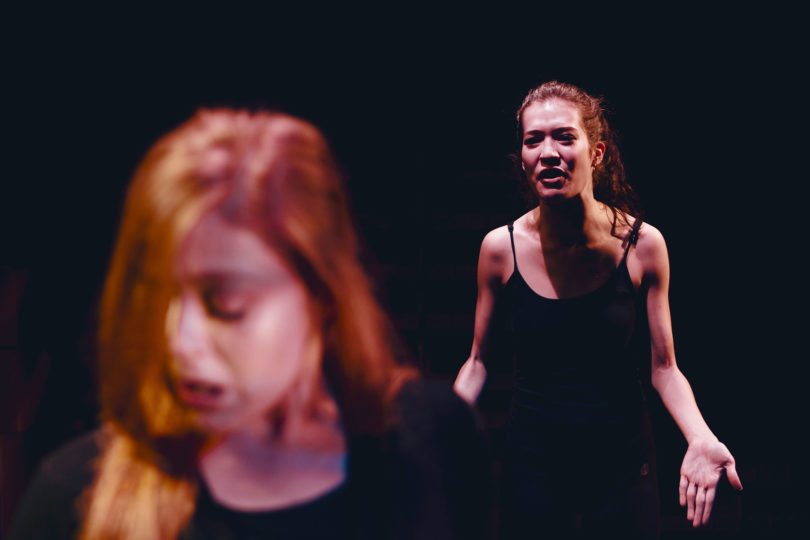 Treadwell’s Machinal tells the story of a young woman (played by theatre and psychology major Eva Ramirez) who is trapped in a restrictive life with no way to express herself or experience a larger world.

Confined first by a repetitive job then a loveless marriage to her boss (played by theatre major John Buisman), she struggles not only to cling to a sense of self but also to make herself heard. When she meets a charming lover (played by theatre and psychology major Jordan Richards) who has lived the sorts of adventures she craves, she learns to strive for the life she desires by any means necessary. An examination of the shifting social structures of 1920s America, Machinal places the plight of the voiceless in stark relief against the backdrop of everyday routine.

“It’s one of the most important plays of the 20th century but has been neglected and often unrecognized,” said David Saltz, head of the theatre and film studies department. “Marla Carlson has an extraordinary and unique approach to making theater that comes out of her background of intense dance training and cutting edge performance theory.”

In addition to Expressionist dance and its legacies, Carlson’s production focuses upon a media backdrop created by Anna Corbould and vocal arrangements by Elise Robinson.

“We’re treating the text as a musical score, exploring the musicality of the language as the accompaniment for the dance,” Carlson said.

Carlson also explores both the play’s feminist and expressionistic foundations and its roots in theatre history.

“The connection to the medieval morality play is very interesting, because this female protagonist is a type of ‘everywoman.’ The difference from a morality play is that she doesn’t have a spiritual guide to lead her to make the right choices, and instead she makes the wrong choices every single time,” Carlson said. “The importance is that it’s not as hopeless for us.”

The play is loosely inspired by Ruth Snyder, the first woman to die in the electric chair.

“Snyder was considered this horrid monster, and people were fascinated. It was a kind of gruesome celebrity culture,” Carlson said. “Treadwell turned to the theater to humanize the person who was being turned into a media spectacle.”
Carlson emphasizes the mixed themes of societal influence and self-determination when discussing individual choices.

“There is a kind of reaction against the mechanization of life. But there are no machines in this production except for the people, who form an assemblage,” she said. “Society’s a machine, and we’re all part of it.”