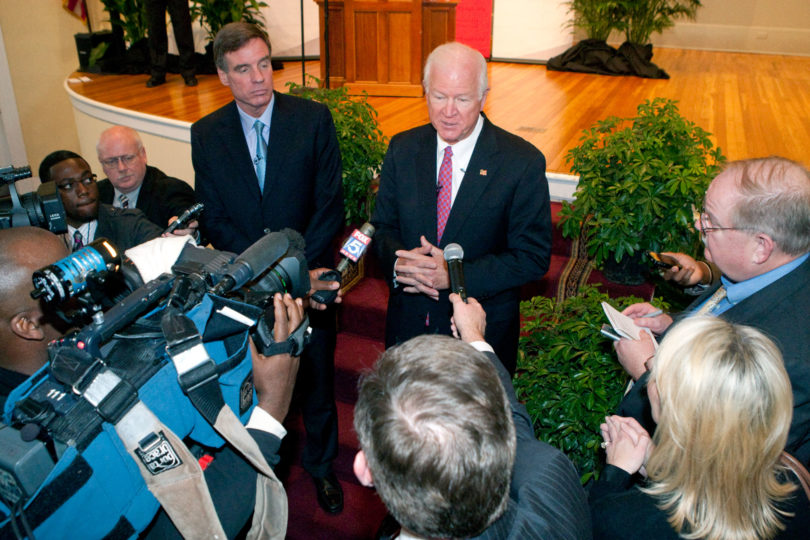 Two U.S. senators from opposing political parties joined together at the Chapel on Jan. 28 to lead a discussion on policy, politics and leadership.

The Mason Public Leadership Lecture is part of the Terry College of Business Leadership Series presented by the Institute for Leadership Advancement.

Speaking to the Terry College students in the audience, Chambliss commended them for their interest in national issues.

“It’s events like this that make me proudest of my university,” he said. “We need bright minds involved in the political process.”

Much of the discussion between the senators centered on the national debt-nearing $17 trillion-and the difficult process of reforming fiscal policy in Washington, D.C.

Warner and Chambliss have a reputation of working together to raise awareness of the national debt, which the Georgia senator calls “the No. 1 issue facing our country.”

In their lecture, the senators said it would take courage for politicians to put the country ahead of politics in reaching deals related to the debt.

“This should not be this hard,” Warner said.

Instead of solving the entire problem at once, the two senators agreed that ­Washington should look to reduce the debt by $5 trillion over the next 10 years by addressing spending and revenue issues and reforming entitlement programs. Both believed that a stronger U.S. economy would only help reduce the debt.

“If we don’t do this,” Chambliss said, “we will be the first generation of Americans to leave this great nation in worse shape than we inherited.”

While the lecture largely revolved around politics, Warner, a former entrepreneur and governor of Virginia, offered a few tips on business leadership to students who soon would be entering the job market.

He advised them to not to be afraid of some failures early in their careers, citing some of his own business failures just after graduation; to realize that strength and success comes from partnerships rather than just working alone; and that it takes passion to get things done.

The discussion came days after ­Chambliss announced he would not seek re-election in 2014. The news brought a higher-than-normal turnout of news reporters to the lecture seeking comment from the senator about his retirement.