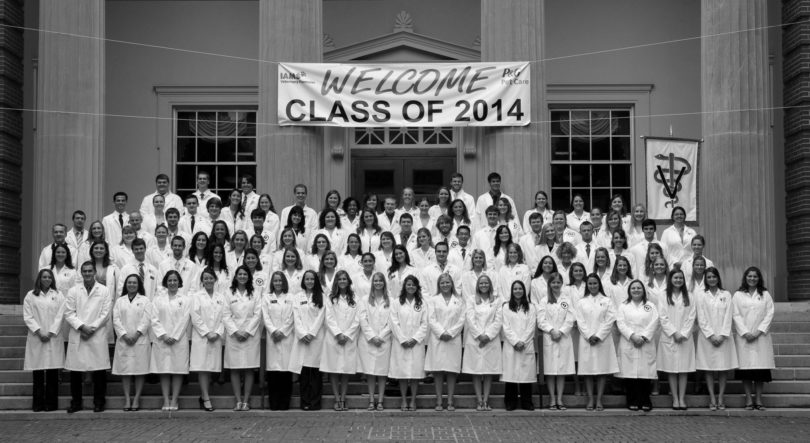 The School of Law and College of Veterinary Medicine have welcomed new classes of students to campus.

The College of Veterinary Medicine welcomed the class of 2014 during its annual White Coat Ceremony held Aug. 14. Sponsored by the Georgia Veterinary Medical Association, this event officially recognized 102 members of the incoming class by donning them in bright white lab coats to be worn during their veterinary education. The incoming class includes 76 women and 26 men, with an average undergraduate GPA of 3.57 and an average GRE score of 1157.

“The white coat is the symbol of medical professionalism,” said Dr. K. Paige Carmichael, the college’s associate dean for academic affairs. “This ceremony, where our first-year students are coated and asked to recite the Veterinarian’s Oath, reminds them that they are beginning their education in one of the most respected medical professions.”

On Aug. 16, 248 students began their three-year pursuit of a degree at UGA’s School of Law. One of the most academically gifted in the school’s history, the Class of 2013 has a median Law School Admission Test score of 164 and the median undergraduate grade point average of 3.7 tie existing school records set last year. The LSAT scores for the 75th and 25th percentiles of 166 and 162, respectively, are new highs. Moreover, one-third of the class scored in the top 6 percent of LSAT test takers nationwide, and two-thirds of the class scored in the top 10 percent.

“We had nearly 4,300 applicants, the most ever, and our goal was to enroll those who would excel in the study of law and continue the law school’s tradition of producing leaders in the legal profession,” said Paul B. Rollins, assistant dean for student affairs and director of law admissions.