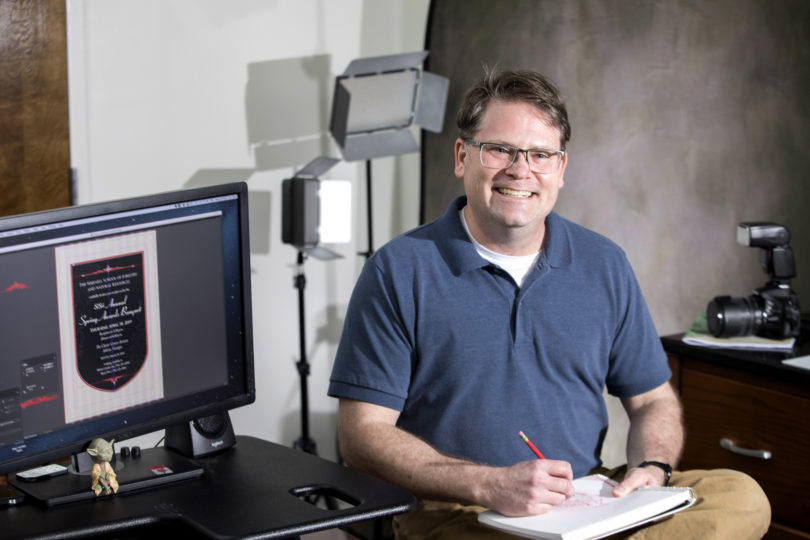 Wade Newbury studied drawing and painting and taught himself skills and programs used by graphic designers. (Photo by Dorothy Kozlowski) 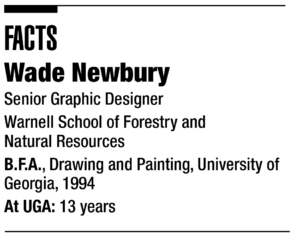 For Wade Newbury, Athens and the University of Georgia have always felt like home.

“I love being at UGA. I’ve never really left,” he said. “I grew up in Commerce, 25 minutes down the road. Then I went to UGA, and then after I graduated, I stayed in Athens. I never really got far away from campus.”

“Teaching the next generation of students about the importance of managing natural resources—I think that’s a great mission to support and promote,” Newbury said. “That makes me really happy to be here. I love having a job getting to do what I love doing: graphic design.”

Newbury graduated from UGA with a drawing and painting degree. Composition, color theory and general design aspects learned in his art classes translated to the design part of graphic design. But works of art focus on the visual aspect, while works of graphic design focus on conveying a message.

Before working at UGA, Newbury worked for seven years as a graphic designer for a sign company in town. He put in extra time at home to learn graphic design components. He took a class at the UGA Center for Continuing Education & Hotel in Adobe Photoshop. After that, he taught himself Adobe Illustrator, Adobe InDesign and other programs.

“I’m still learning. I’m always learning,” he said. “You don’t just go from having a degree in drawing and painting to getting a job at UGA as an assistant graphic designer without putting in a lot of extra work.”

Newbury is the only graphic designer for Warnell. He and Sandi Martin, Warnell’s public relations coordinator, work closely together on social media projects and the alumni magazine, The Log. He also helps develop projects for student services and alumni and development, ranging from recruitment brochures to thank you cards for donors.

“I am alone in that I’m the only graphic designer, but I do have a whole team around me,” he said. “When we’re working on projects, there’s a lot of give and take and a lot of collaboration.”

Newbury and Martin share photography duties for the college, and he takes studio portraits for new faculty members. Occasionally, he travels to different locations to take photographs of special school events, like homecoming tailgates or alumni banquets.

Newbury recognizes that UGA and Athens are special places, and he takes pride in his work at Warnell.

“It really is an honor to be able to serve the university,” he said. “My plan is to work here until I can retire. We’ll see if I can keep up with the software.”