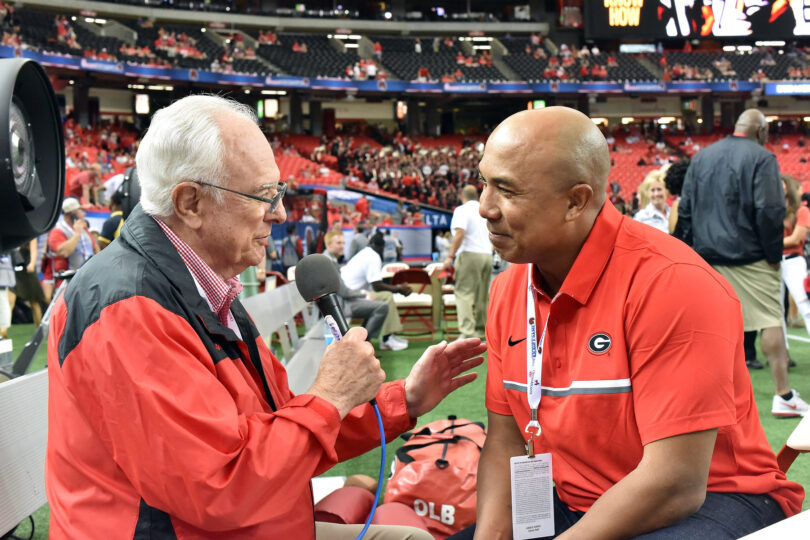 Loran Smith and Hines Ward talk on the sideline during the Chick-fil-A Kickoff Game against North Carolina in the Georgia Dome in Atlanta in 2016. (Photo by Perry McIntyre Jr.)

With a voice as smooth and comforting as a glass of iced tea — sweet, of course — Loran Smith has been talking to us for decades. He’s given us updates from the sideline at Sanford Stadium, he’s provided context, depth and nuance during pregame and postgame shows, and through it all he’s been a storyteller and interviewer with grace and charm.

Whenever you’re listening to Smith on the radio, it feels like you should be sitting on your front-porch swing, that glass of tea sweating on the table beside you, with a loving and loyal dog resting at your feet. 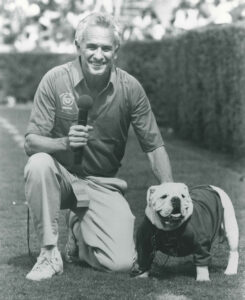 “My first and foremost objective,” in getting involved in radio back in the late 1960s, Smith said, “was to promote Georgia. And No. 2, to enjoy a nice experience.”

It’s safe to say after all these years that Smith has achieved those objectives many, many times over. This 2021 Georgia football season is Smith’s 50th as a member of the Bulldog broadcast team. Yes, he was doing this long before head coach Kirby Smart, 45, was born.

Smith was the first sideline reporter Georgia’s radio broadcast ever had, and over the years he became an institution, the on-field complement to Larry Munson’s legendary play-by-play calls from the radio booth.

You’re thinking it, so let’s get it out of the way: “Whaddaya got, Loran?”

That question from Munson to Smith during games was uttered on air maybe a thousand times over their decades doing games together, and then a few million more times by Bulldog fans doing their best Munson impression. That line is so iconic that it’s the title of Smith’s newest book, a collection of essays and columns. You’ll also sometimes see “Whaddaya got, Loran?” on t-shirts around town.

After all these years, Smith said, “it’s just fun to be around college athletics, particularly Georgia football. So that meant a lot to me to be able to be part of the broadcast, which has remained very popular across the state. 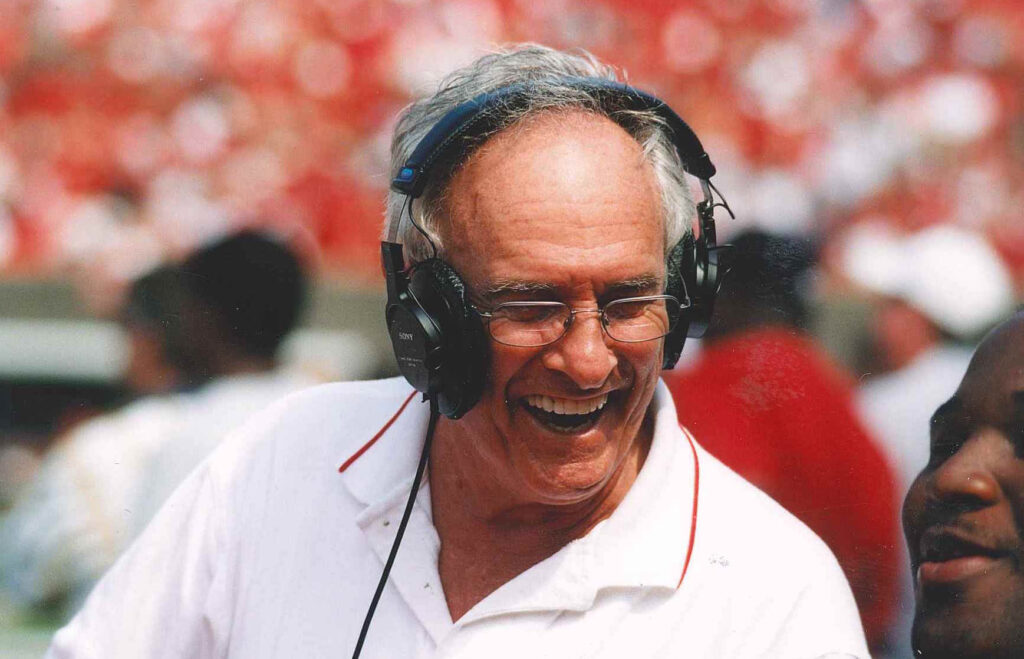 While Munson so famously called the action of the young men competing with all of their might between the lines, Smith so often reminded us that those young men were just that, young men, student-athletes, with hopes and dreams and their own triumphs and challenges in life.

Before technology made interacting from the sideline much easier, Smith said he had to provide a visible cue to get the radio booth’s attention. “If (Munson) saw me standing up on a bench, that meant I had something to say and I had something to share with him.” 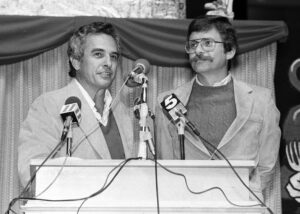 The early headsets that allowed him to communicate directly with the booth, Smith said, “made me look like a man from Mars.” Because of all the aerials and cords, he said, when there was big storm that passed over during a game at Ole Miss, “I told Larry, ‘I’ll see you later,’ and I took that headset off and went into the locker room” out of fear of a lightning strike.

Smith grew up on a cotton farm in Wrightsville, Ga., the same small spot about 60 miles east of Macon that produced another Georgia legend, Herschel Walker, a few decades later. Smith had to put in his share of work on the farm, doing what needed to be done. And for more than 60 years, since coming to Athens in the late 1950s to attend the University of Georgia, Smith has been working, telling stories about the Bulldogs.

A talented runner, Smith earned a track scholarship and went on to be the team captain in 1960. But Smith, no stranger to full and busy days, didn’t just go to school and run track. He also worked for the legendary Dan Magill in Georgia’s Sports Information office. 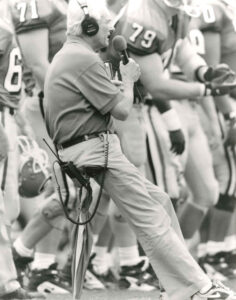 In Magill’s book “Bull-Doggerel,” the beloved men’s tennis coach, Sports Information Director, creator of the Georgia Bulldog Club, historian, raconteur and more, tells the story of a young Smith showing up at his office to work for free, hoping to gain experience. Magill wrote that every day Smith would show up in his ratty track outfit, possibly the same one every day, until Magill finally brought him some more clothes to wear. Being a proud young man, Magill wrote, Smith declined. But Magill was insistent, reminding him that winter was coming, after all.

“I just really loved that experience, loved being around him because of his entertaining and colorful ways. But he was so insightful. He knew so much about sports, he knew so much about Georgia sports, particularly football, but he was firstly well-versed in all sports. He was Georgia’s greatest promoter.” 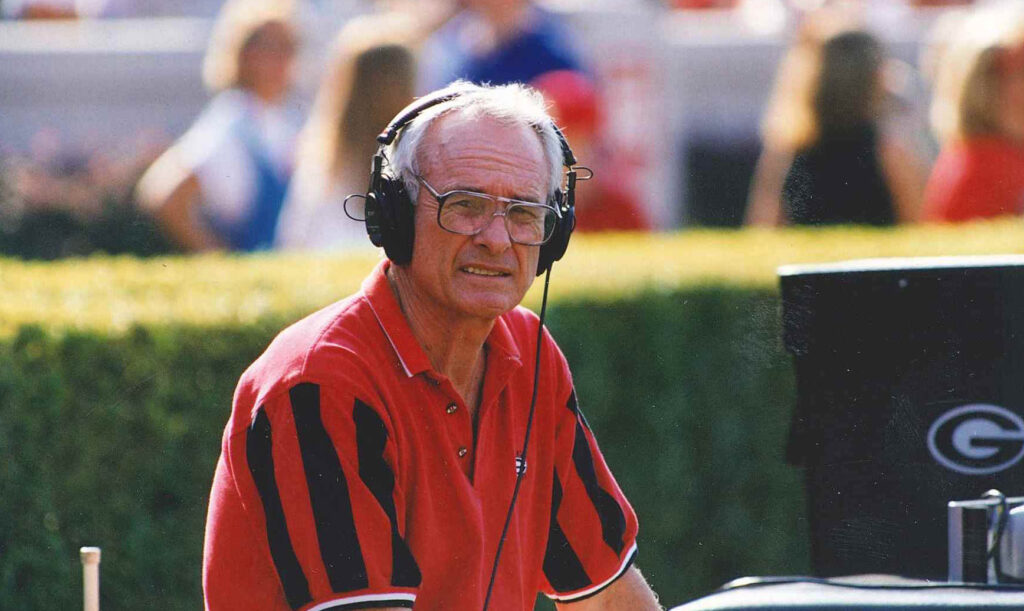 Kind, loyal, a great worker, communicator and facilitator, there is a reason that Smith has so many things named for him. There is the Loran Smith Center for Cancer Support at the Piedmont Athens Regional Medical Center. There is the Loran and Myrna Smith Lobby in the Indoor Athletic Facility, which commemorates Smith’s 50-plus years associated with Georgia athletics and he and his wife Myrna’s many contributions to UGA.

And as if that wasn’t enough, there was Uga VII, named Loran’s Best, and Uga VI, named Uga V’s Whatchagot Loran.

Smith is a former chairman of the Georgia Sports Hall of Fame, which inducted him back in 1997, and he’s done a career’s worth of good work since to be worthy of induction all over again. After graduating with a degree in Journalism, Smith’s professional life has covered a lot of ground. He’s produced various Georgia football coach’s television shows, created and sold sponsorships for radio shows, written more than a dozen books, primarily about Georgia athletics and The Masters, as well as continuously written columns that appear in numerous publications around the state.

Three years ago, at age 80, Smith was seriously injured during a football practice when a couple of players ran into him and another observer on the sideline inside the Billy & Porter Payne Indoor Athletic Facility. He recovered and went back to work, just like he has done throughout every bit of adversity over the years.

No, he won’t retire, not when there are way too many stories out there still waiting to be told.