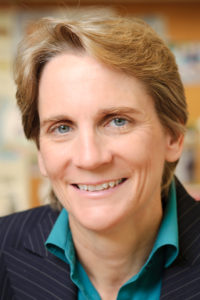 If you ask Sharon Deem what’s keeping her up at night, the wildlife veterinarian and epidemiologist will give you a blunt answer.

“We are in a hot mess,” said Deem, the director of the Institute for Conservation Medicine at the Saint Louis Zoo. “If you … pick your favorite challenges, you can see that there are a number of them that link humans, animals and plants to where we are with planetary health today.”

Deem’s research spans 30 countries and has included everything from a health-monitoring program for gorillas in central Africa, to health assessments of sea turtles in Africa and the Americas, to health care of working elephants in Myanmar.  That connection between the health of humans, animals and the environment is the basis of the One Health Initiative, a movement to form collaborations between experts in a variety of fields to answer pressing health challenges, and it’s what Deem focuses on in her research and her work as a zoo veterinarian.

“If there is one thing I think One Health is—this growing movement of bringing disciplines together—it is [about] finding the solutions to these challenges,” she said.

With the reduction of animals’ natural habitats and the increase in international trade, the boundary between humans and animals has blurred, Deem said. As human interactions with wild animals increase, so does the risk of transmitting infectious diseases—both from animals to people and from people to animals. Of emerging infectious diseases affecting people in the 21st century, approximately 75 percent of them originated in animal populations.

One example that embodied the principle of collaboration between epidemiologists, veterinarians and other researchers began in the 1980s, Deem said during her Signature Lecture, held in the Warnell School on Nov. 5. Several species of vultures in India began to rapidly die off. Then, the incidence of rabies infections among people increased. The two issues seemed unrelated, but thanks to the “detective work” of veterinary pathologists, ecologists and others, researchers identified the culprit: a drug called Diclofenac that was being used to reduce inflammation in cows.

The cows had the drugs in their muscles when they died, so when vultures ate the cows, they would consume the drug, which caused renal failure in vultures. Their decreased numbers led to more carcasses, which in turn provided a food source for India’s feral dog population. Feral dogs increased, and as a result so did rabies in both the dogs and the people they bit.

Once the source was identified, researchers could take action. The government made Diclofenac illegal to use in veterinary practices, increased rabies prevention vaccinations in dogs and set up vulture “restaurants” where vultures could munch on uncontaminated meat placed in fields specifically for them. That collaboration between disciplines is the key to solving these pressing interspecies health problems and making sure the environment and nature are something people can enjoy for generations to come.

“From a public health standpoint, this connection we have with nature and animals improves us spiritually, psychologically, emotionally and physically,” Deem said. “We need this ­connection.”