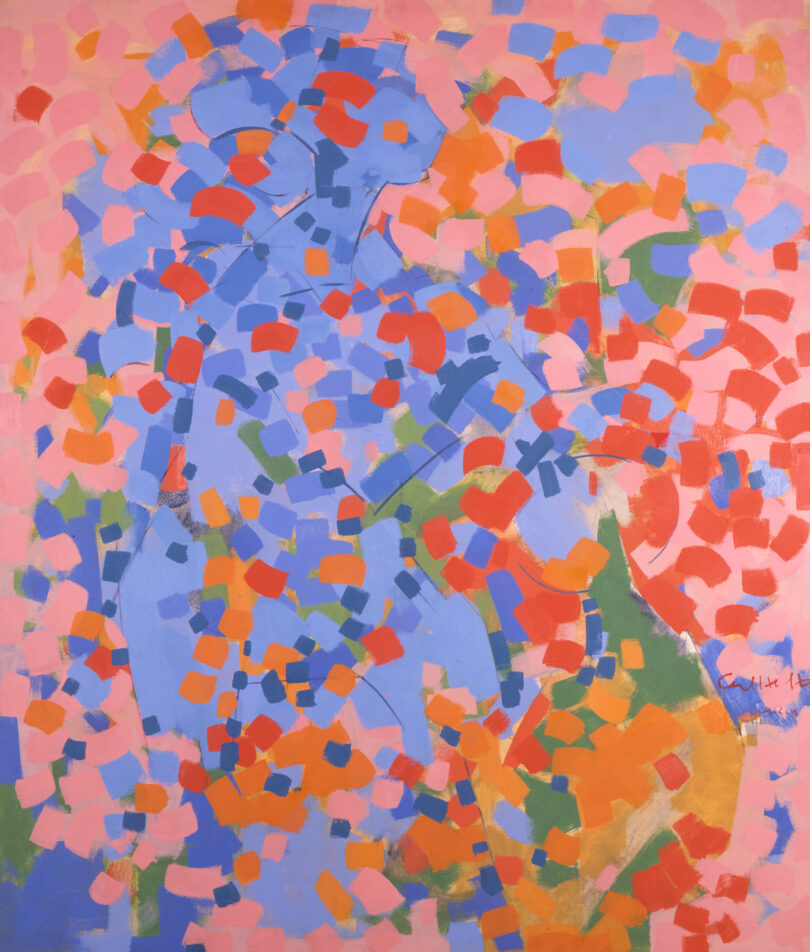 Carl Holty, a German-born American artist who made both figurative and abstract art, taught at the university in the late 1940s. His art is being displayed through Jan. 17, 2021, at the Georgia Museum of Art in the exhibition “Carl Holty: Romantic Modernist.” (Submitted photo)

The University of Georgia has had notable artists in residence for a long time. One of the earlier ones was Carl Holty, a German-born American artist who made both figurative and abstract art and taught at the university in the late 1940s. His art is being displayed through Jan. 17, 2021, at the Georgia Museum of Art in the exhibition “Carl Holty: Romantic Modernist.”

Throughout a career spanning more than five decades, Holty investigated the evolving language of 20th-century modernist movements and shifted with them as he moved from realism to cubism and finally into abstraction along with his friends and mentors Hans Hofmann, Piet Mondrian, Stuart Davis, Joan Miró and Mark Rothko. He and Romare Bearden corresponded regularly and wrote the book The Painter’s Mind: A Study of the Relations of Structure and Space in Painting together in 1969. Howard Thomas, one of Holty’s oldest friends, recommended Holty to the University of Georgia’s Lamar Dodd School of Art, where he served as artist in residence from 1948 to 1950.

William U. Eiland, director of the museum, said that “Carl Holty was in many ways an unsung genius. [He] has been neglected since his death in 1973, even though his color-saturated works and his voluminous correspondence are fundamental to understanding theories of art-making in the 20th century.” Although Holty experienced adversity, his considerable knowledge of abstract art and constant presence in the art scene made him internationally known, the first abstract painter from Milwaukee to achieve that status.

Holty always thought deeply about what it meant to be an artist, especially in comparison with other artists, and being able to be in touch with one’s character and one’s self was the most important to him. He did not have an artistic background, and had oddly enough regarded drawing as a chore.

Nonetheless, he was interested in art at a young age, and his family paid for him to take private art lessons. They expected that he would follow his father or grandfather’s footsteps in the medical field or in business, but he continued making art for the rest of his life. He struggled internally over his German heritage during World War I, but the inner conflict had subsided by World War II, as his beliefs firmly aligned with American ideals in opposition to fascism. He also struggled on and off in the art world, but his time at the University of Georgia helped pave the way for his reentry into the art scene through teaching at universities.

Marilyn Laufer, director emeritus of the Jule Collins Smith Museum of Fine Art at Auburn University, served as guest curator of the exhibition, pulling together works from public and private collections. Laufer writes in the digital brochure that accompanies the exhibition that “this romantic ideal of living for art, of plunging into the flow of history to create an artful existence may have seemed somewhat outmoded, futile, and naïve at the end of the 20th century, but for an artist like Carl Holty, the struggle and the challenge were central to his life and career.”

The museum also published the late Virginia Rembert Liles’ manuscript “Carl Holty: Search for the Grail” on its website, lightly edited to correspond with the exhibition. Liles quotes extensively from Holty’s memoirs and diaries, providing valuable insight into the struggle and the challenge Laufer mentions as key to understanding the artist’s career.

•    Curator’s talk with Laufer and Eiland (to be scheduled)
•    Family Day To-Go on Oct. 10, with free art kits and activity guides that can be picked up at the museum
•    Artful Conversation via Zoom with curator of education Callan Steinmann on Oct. 14 at 1 p.m., focusing on Holty’s painting “Two Women Bathing”
•    Toddler Tuesday on Oct. 20, with an Art at Home activity and storytime video
•    Teen Studio over Zoom with local artist and educator Kristen Bach (email sagekincaid@uga.edu to register and learn about free art supply kits)

All events are free and open to the public unless otherwise noted. Those with a Zoom component will have a registration link on the museum’s website.