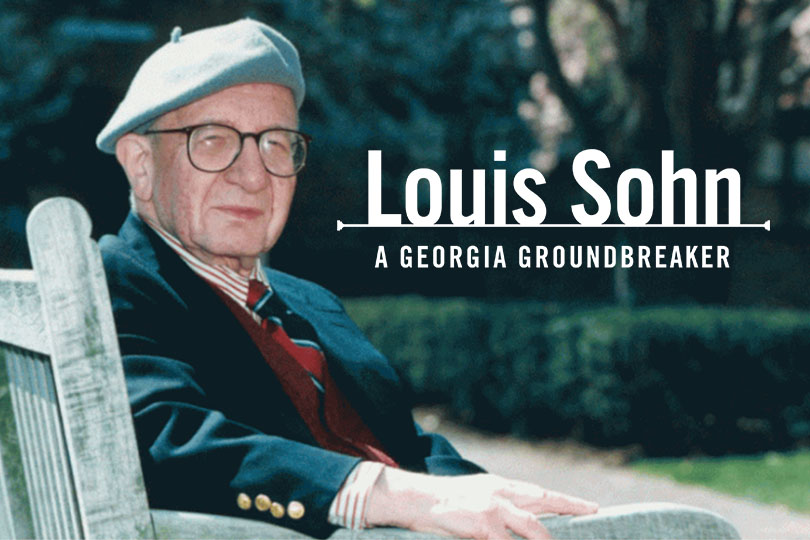 Louis B. Sohn spent his life promoting international law and peace. The staunch human rights advocate believed no problem was too complex to solve if nations worked together.

Considered one of the world’s most eminent international and legal scholars, Sohn was the inaugural holder of the Emily and Ernest Woodruff Chair in International Law at the University of Georgia School of Law for a decade – teaching and mentoring students, many who then spent their legal careers leading international humanitarian efforts, combating human trafficking, and helping to maintain peace and security throughout the world. 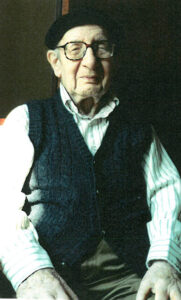 Today, 5,000 volumes from his personal collection of legal writings are housed at the Louis B. Sohn Library on International Relations, a branch of the Alexander Campbell King Law Library, located in the law school’s Dean Rusk International Law Center.

“His breadth of knowledge, his analytical capabilities, his languages, his piercing intellect, his devotion to law and excellence, his dedication to peace and justice and his work ethic were unparalleled,” said Susan Timberlake, who worked for Sohn as a research associate before and after graduating from UGA Law in 1982. She went on to obtain a master’s degree in international law from the University of Cambridge in 1984 and spent 30 years at the United Nations working on humanitarian, human rights and health issues.

A native of what then was called Lemberg, Austria-Hungary, and now is Lviv, Ukraine, Sohn came to the United States in 1939 at age 25, two weeks before the Nazi invasion, to be a research fellow at Harvard, where he went on to hold the chair in International law for almost 40 years.

Only his father, a physician, survived WWII. His mother, also a doctor, died of pneumonia that winter and his sister, who was studying at a university in Austria-Hungary, was taken during a Nazi raid and never seen again.

Sohn is best known for helping to draft the United Nations Charter in 1945, and for co-authoring the book “World Peace Through World Law” with Grenville Clark, which resulted in 46 nominations for the Nobel Peace Prize. But he was also passionate about sharing his writings and his vision for the future. Believing international law could help create a more just and peaceful world, Sohn discussed these possibilities with thousands of law school students he taught at the University of Georgia, Harvard University and George Washington University. 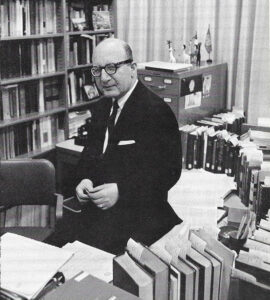 Louis B. Sohn in his office at Harvard Law School.

Timberlake and others say Sohn, who taught international and human rights law and law of the sea from 1981 to 1991 at UGA Law, was humble and kind to students and colleagues. About 5 feet tall with large glasses, always dressed in a suit, tie and a beret, Sohn came to UGA Law after being invited by another distinguished member of its faculty: Dean Rusk, who had served as U.S. secretary of state under Presidents John F. Kennedy and Lyndon B. Johnson. The two worked together for many years when Sohn was a principal negotiator for the U.S. Defense Department where he drafted disarmament and other treaties protecting human rights and the environment.

After more than 35 years in the U.S., former students and lifelong friends said Sohn’s Slavic accent was just as strong when he arrived in Georgia as it was the day he landed in the U.S.

“He was charming, happy and engaging,” said Paige Otwell, who studied under him and was his research assistant for two years. “He knew everything there was to know about international law and was always prepared. He expected that of the students in his class as well.” 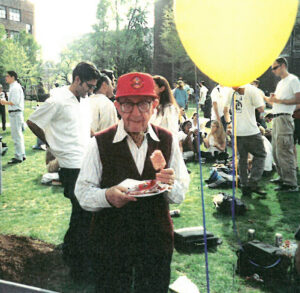 Louis B. Sohn at a party with students.

Otwell, who worked at The Carter Center at Emory University after leaving UGA Law and is now an assistant U.S. district attorney in Athens-Clarke County, said Sohn rode the student bus each day to get to work. Although many students kept their distance because they felt intimidated by Sohn’s scholarly reputation, Otwell remembers asking him to come to her house for dinner, something she would never have done with any of her other professors. She, Timberlake and others kept in touch and visited with Sohn and his wife, Betty, until his death at 92 in 2006. “He could be intimidating because of his intellect but he was so cute and so nice. Despite what he had gone through in his life, he was not broken. He was always positive and hopeful.”

Kit Traub, who graduated from UGA Law in 1988, was an American diplomat for 23 years at the U.S. State Department and one of Sohn’s students who called themselves the “Sohnistas” because they revered Sohn. Like Otwell and Timberlake, who kept in contact with him until his death, Traub credits Sohn for pointing him in the right direction.

“Louie was really a special man and as a genius he was so personable and so kind,” Traub said. “He was able to teach and inspire students to reach for the same goals that he aspired to reach.”

Although some saw him as an idealist, those who knew him said he was always pragmatic. This “genius, mentor and friend” connected to his students by sharing colorful stories about his life and work, they said. Meeting people like Albert Einstein and Eleanor Roosevelt did not diminish his ability, they said, to connect with those without famous pedigrees.

Upon Sohn’s death, U.N. Secretary-General Kofi Annan said: “Throughout his life, he won wide respect as a voice of reason and source of wisdom and was a firm believer in the importance of the United Nations and of the rule of law in settling international disputes.” 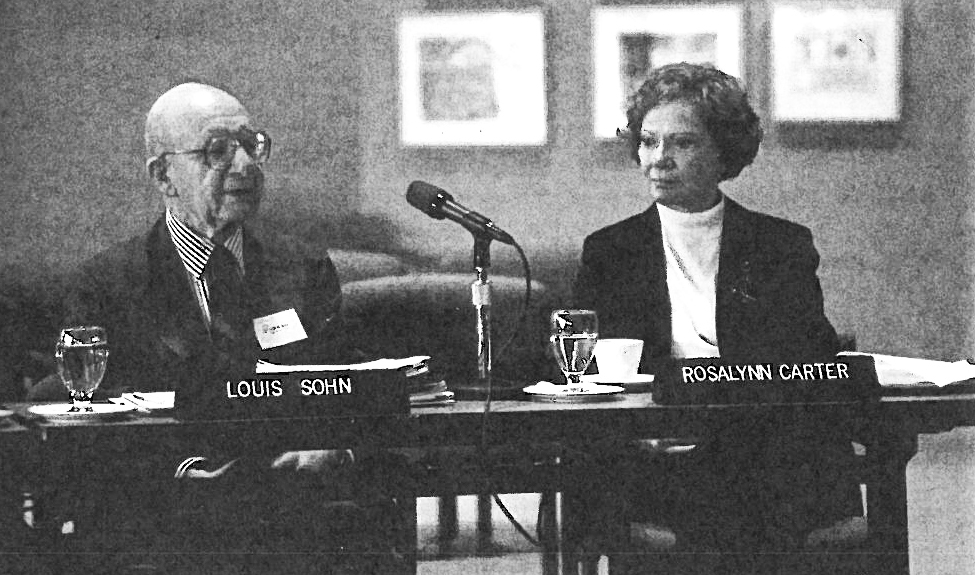 Jean-Marie Henckaerts, now a leading legal adviser at the International Committee of the Red Cross in Geneva, Switzerland, earned his master’s degree in law from UGA Law in 1990. He was only 23 when he arrived in Georgia, the first time he stepped foot in the United States.

Henckaerts came to the U.S. from Belgium with 20 other foreign students to earn a master’s degree in law. He decided to study in Georgia because Sohn was there. The first time he got to sit with Sohn in a more informal setting was later that year at a restaurant in Athens. He and two other students bid on a lunch with Sohn at the fifth annual Student Bar Association Faculty Auction. Although the three students paid $50 for the privilege, in the end, Sohn picked up the tab. 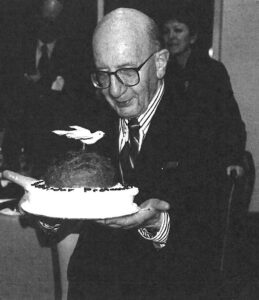 Louis B. Sohn during a celebration.

By this time, Henckaerts, who followed Sohn to George Washington University to get his Ph.D. in law, knew he wanted to pursue a career in international law.

“The determining factor after studying for a master’s degree and working in a law firm doing international corporate law was Louis Sohn. I decided that I would rather take his path in human rights law,” said Henckaerts, a member of the Dean Rusk International Law Center Council. “Studying under him changed my whole life and led me in a direction that has been quite satisfying.”

Sohn remained active into his 80s. He traveled the world speaking about arms control, the law of international conflict, the law of the sea and environmental law.

“Professor Sohn stormed the corridors of power here and abroad to plead his cause armed with the power of his pen, his persuasive advocacy and his indomitable spirit,” said Herbert Morais, a former Harvard law school student and friend up until Sohn’s death, who worked as a senior international lawyer with the World Bank, the International Monetary Fund and the Asian Development Bank for almost 30 years. 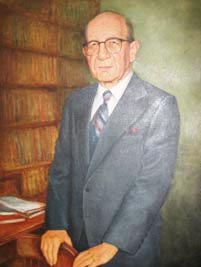 A framed picture of a giraffe was given to Sohn on his 80th birthday, a testament to his unyielding character, said his former students, friends and colleagues. Sohn said he liked giraffes because while they might keep their heads in the clouds, their feet are always firmly planted on the ground.

Sohn’s portrait now hangs at UGA in the Dean Rusk International Law Center’s library, as a tribute and reminder that UGA law school has a long and continuing tradition of global leadership.

“I am proud to hold the endowed Emily & Ernest Woodruff Chair in International Law that Professor Sohn inaugurated on his arrival at Georgia Law,” said Diane Marie Amann, who is also the university’s Regents’ Professor of International Law. “Professor Sohn was a path breaker in international human rights law, the law of peace, and international environmental law, fields of keen interest to our students, important to our world, and significant to my own teaching and scholarship.”