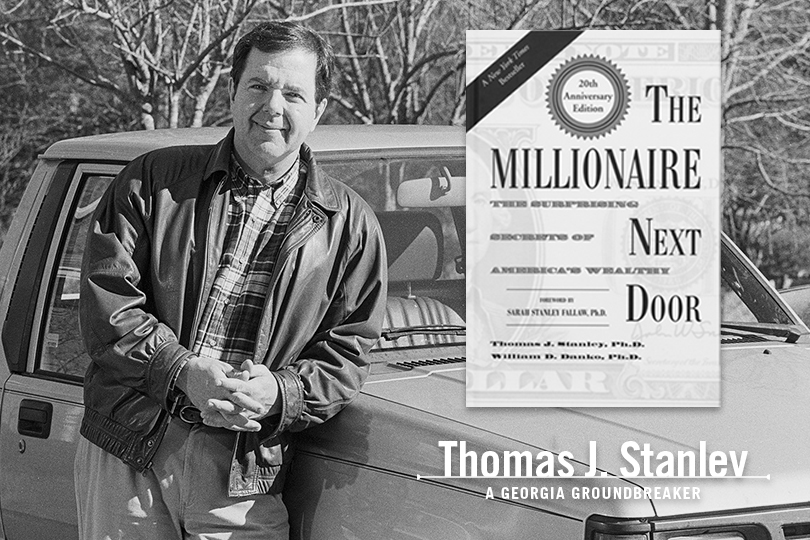 UGA alumnus Thomas Stanley wrote "The Millionaire Next Door," which made a lasting impact on how people can build wealth.

This story is part of a series, called Georgia Groundbreakers that celebrates innovative and visionary faculty, students, alumni and leaders throughout the history of the University of Georgia – and their profound, enduring impact on our state, our nation and the world.

It has been a quarter of a century since Thomas Stanley, who received his doctorate in business administration in 1974 from the University of Georgia, wrote the bestselling book “The Millionaire Next Door: The Surprising Secrets of America’s Wealthy.” Co-authored with a former student, William D. Danko, the book’s enduring and timeless message was that many wealthy individuals grew rich on an average salary, through hard work, modest spending, careful saving and taking the occasional calculated risk.

The publisher had only modest expectations at first, and a mere 5,000 copies were printed. Yet the book spent more than 170 weeks combined on The New York Times Best Seller list and over 4 million copies have been sold worldwide. The book still sells briskly today.

“Dr. Tom Stanley’s work became iconic in the ’90s with “The Millionaire Next Door” skyrocketing to all the bestseller lists,” recalled Dave Ramsey, the well-known host of “The Ramsey Show” and CEO of Ramsey Solutions. “He gave Americans hope again that we can actually start from nothing and win in wealth building — because the guy next door did. The power of his work is shown by the fact that 30 years later he is still quoted and revered.” 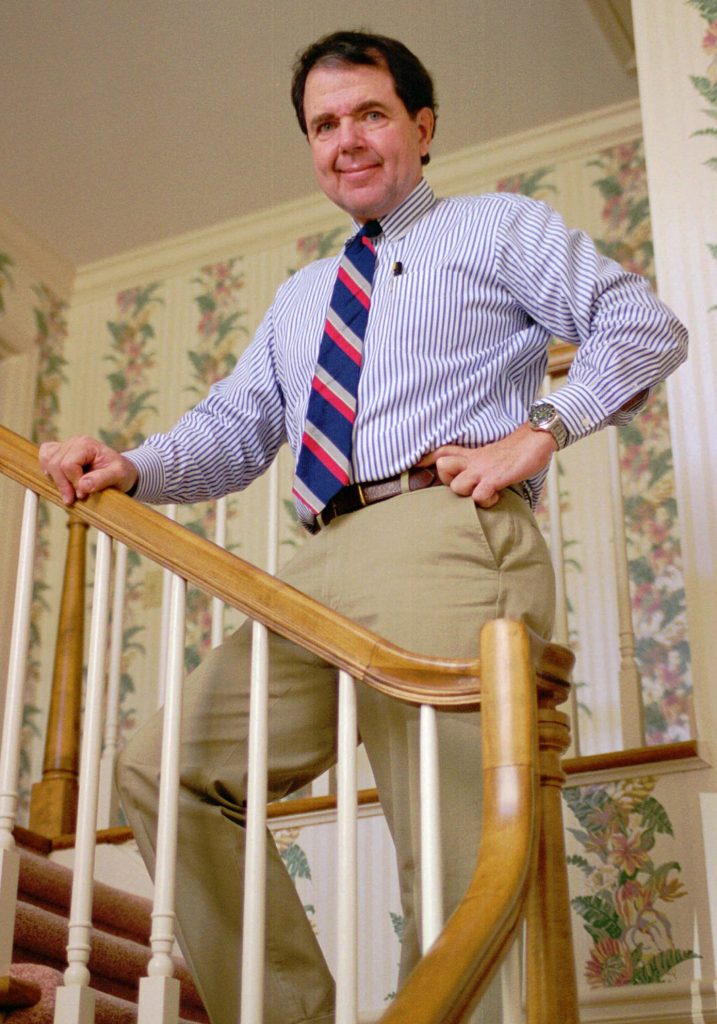 Thomas Stanley poses on the stairwell of his Atlanta home in 1996. (AP Photo/Alan Mothner)

Stanley “was always interested in affluent people,” his wife, Janet, recalled, “mostly because he wasn’t one. He was the son of a subway car driver.” Stanley surveyed hundreds of “quiet” millionaires and then crunched the data on their lifestyles, career choices and consumption habits. He unearthed some surprising findings — doctors and lawyers, for instance, were highly paid but maintained expensive lifestyles that made it harder for them to save. 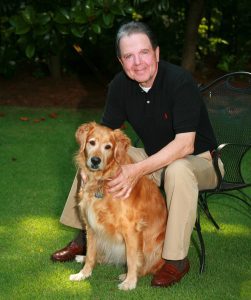 Thomas Stanley with his dog, Lily.

Stanley found that income explained only about 30% of the variation in wealth. The overwhelming impact of the other 70% was due to lifestyle. Millionaires were usually frugal — often keeping their starter homes, avoiding flashy cars (a surprising one-third bought used vehicles), marrying partners with similar values, and enjoying their jobs. Most of them did have college degrees, however, and invested long term in stocks and mutual funds.

The discipline millionaires applied to their life was also reflected in their health, Stanley found. They were less likely to be overweight, and were healthier overall than their high-spending peers.

Stanley himself was like that, said Janet. “We didn’t go on cruises, we weren’t big spenders. At some point we became millionaires, too.”

Stanley, who was born in New York in 1944 and passed away in Georgia in 2015, fell in love with the South as soon as he arrived, according to his wife.

He received his master’s degree from The University of Tennessee-Knoxville where he taught marketing as a graduate assistant. When he arrived in Knoxville, he “walked out and saw Neyland Stadium and he loved SEC football from then on,” Janet said. 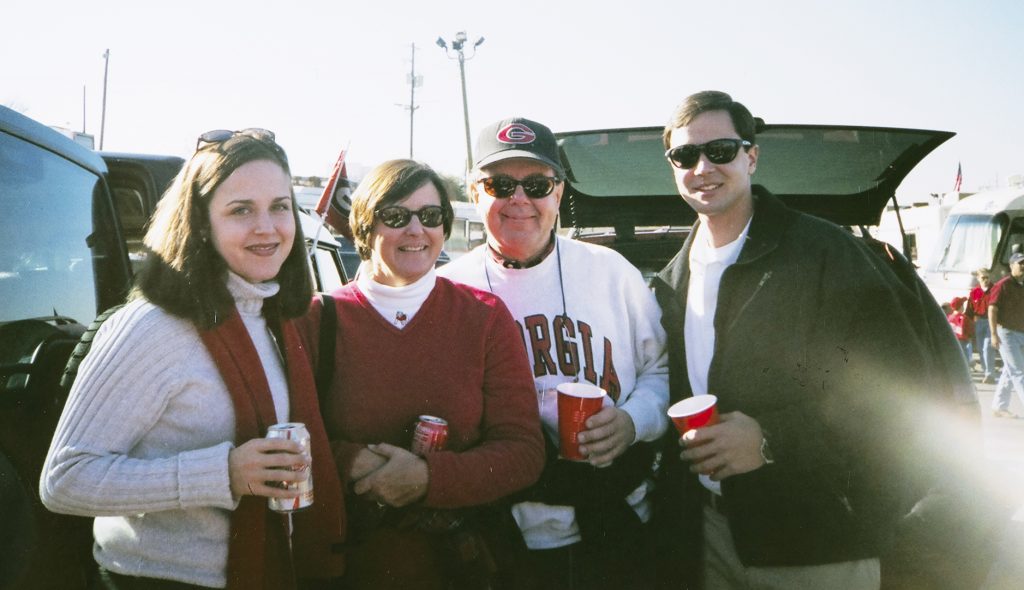 Thomas Stanley tailgating at UGA with his family. (Courtesy of the Stanley family)

In 1970, he started at UGA in the doctoral program. In particular, his loyalty to the Georgia Bulldogs was fierce and lifelong. The entire family would often attend games together. Stanley was so emotional about the Dawgs that later in life he would only watch the recorded game after it was over and he had already learned which team actually won. 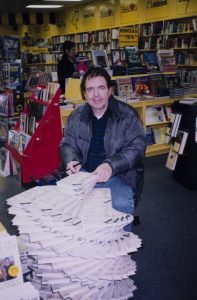 Thomas Stanley signing copies of his book. (Courtesy of the Stanley Family)

After receiving his Ph.D., Stanley taught marketing at the State University of New York-Albany. In 1976, he came to Georgia State University in Atlanta where he taught marketing at all levels, including the Executive MBA program. In 1989, Stanley left teaching to pursue independent research full time. “He was such a good teacher, so conscientious,” Janet said. “And he was also doing consulting work and giving speeches and he felt he couldn’t do both well. So he left the university and started working on compiling the data he had gathered for ‘The Millionaire Next Door.’”

Stanley first published on this topic in 1979 after presenting a paper at the Securities Industries Association in New York City. He called the individuals he was studying the “Wealthy Blue Collar Segment.” He noted at that time that “the Wealthy Blue Collar do not need to purchase the expensive artifacts that are part of the white collar worker’s status knapsack.” 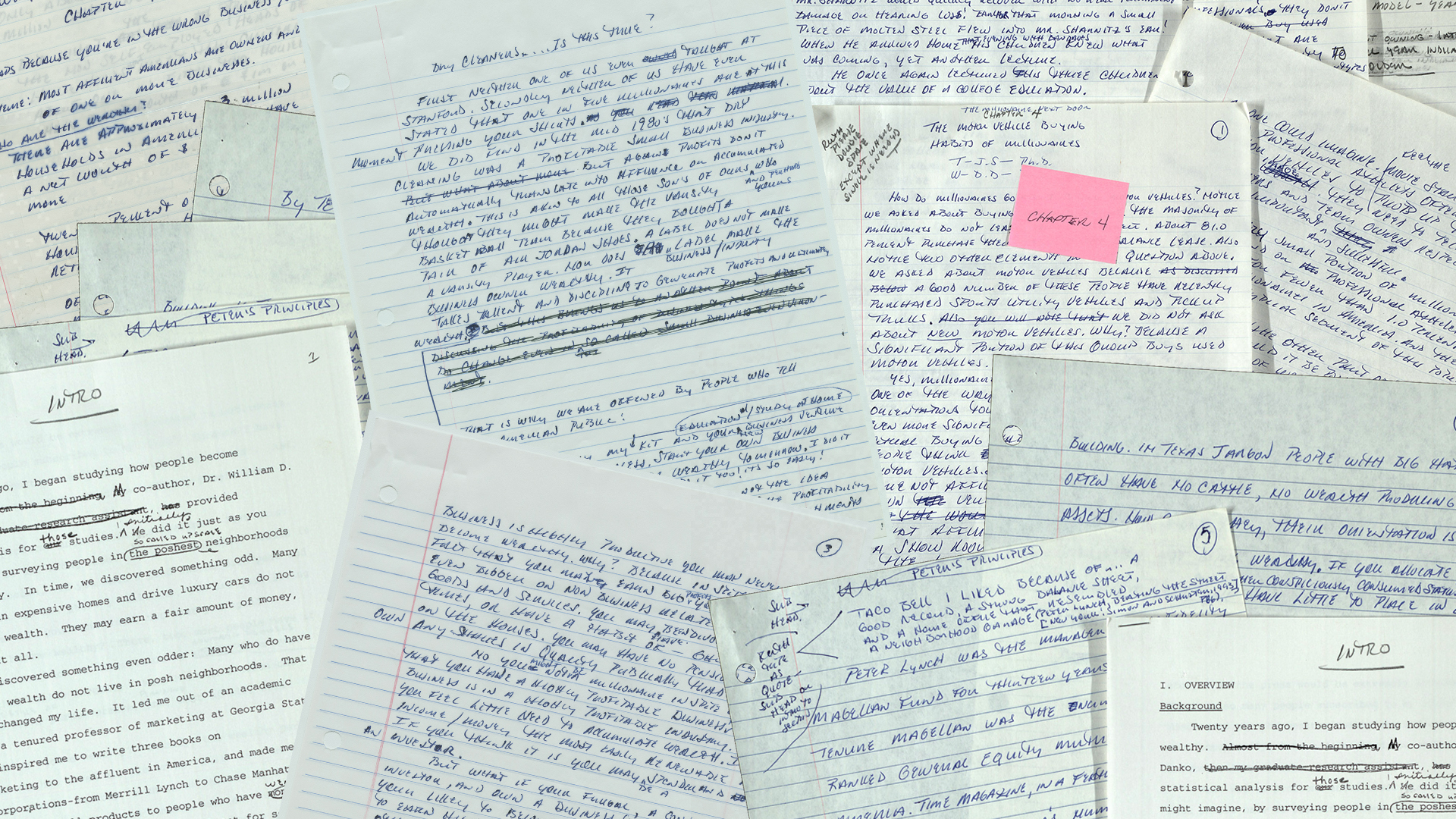 Manuscripts from Thomas Stanley’s “The Millionaire Next Door.” (Courtesy of the Stanley family)

The working title for “The Millionaire Next Door” was “That’s Why They’re Wealthy.” He used the expression “Big Hat, No Cattle” in lectures, speeches and other written material, evoking a humorous cliché used to describe individuals who talk a good game but can’t back it up. The phrase was memorialized in a Randy Newman song by the same name, which riffed on the concept: “Big hat, no cattle … big boat, no paddle … big horse, no saddle.”

Giving back to UGA 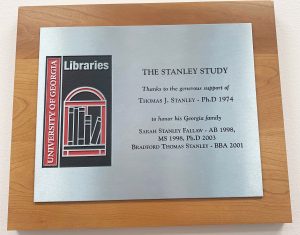 A plaque outside of The Stanley Study in the Miller Learning Center on the UGA campus.

When “The Millionaire Next Door” hit the bestseller list, Stanley shared the news with his daughter, Sarah Stanley Fallaw, who was attending UGA as an undergraduate at the time (she received her Ph.D. from UGA in industrial-organizational psychology in 2003), and his son, Brad (who graduated with a degree in marketing in 2001). Little did they know that their dad would become both famous and wealthy, and that on the last day of December 2001, he would donate a portion of his speaking fees to the UGA Libraries.

He and his family named a group study room in the Miller Learning Center The Stanley Study and donated the original manuscript for “The Millionaire Next Door” to the Hargrett Rare Book and Manuscript Library, where it remains today, complete with markings and editorial comments. “His support for the UGA Libraries will never be forgotten,” said Chantel Dunham, who met him in 1995 when she was appointed the first director of development for the UGA Libraries. “He was such an amazing man.” 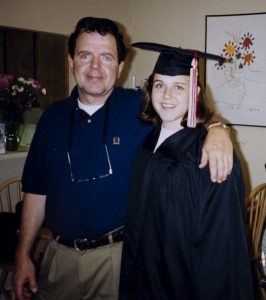 Thomas Stanley and his daughter, Sarah Stanley Fallaw, at her graduation. (Courtesy of the Stanley family)

“My dad had a magnetic personality,” recalled his daughter. “People enjoyed hearing him speak, and anywhere he went he would draw a crowd. Every Christmas we would drive around to all the people who had done work for him throughout the year and deliver presents to each one. I think he wanted to do for others, because he didn’t have much growing up.”

After her father’s tragic death in 2015 (he was hit by a drunken driver), Fallaw finished a book she had been collaborating on with Stanley. Called “The Next Millionaire Next Door: Enduring Strategies for Building Wealth,” it explores smart choices that lead to improved financial health.

One of the insights of the “Millionaire” books was that the wealthy weren’t necessarily workaholics. They spent quality time with family and friends, and enjoyed hobbies. Janet says Tom Stanley was that way himself. “He loved fishing, and we would go into the North Georgia mountains to fish in the lakes there,” she recalled. “He was also a woodworker and loved to carve things. His workshop in the basement — wow! It was filled with so many things. My son and son-in-law both like to come over and borrow the tools.” 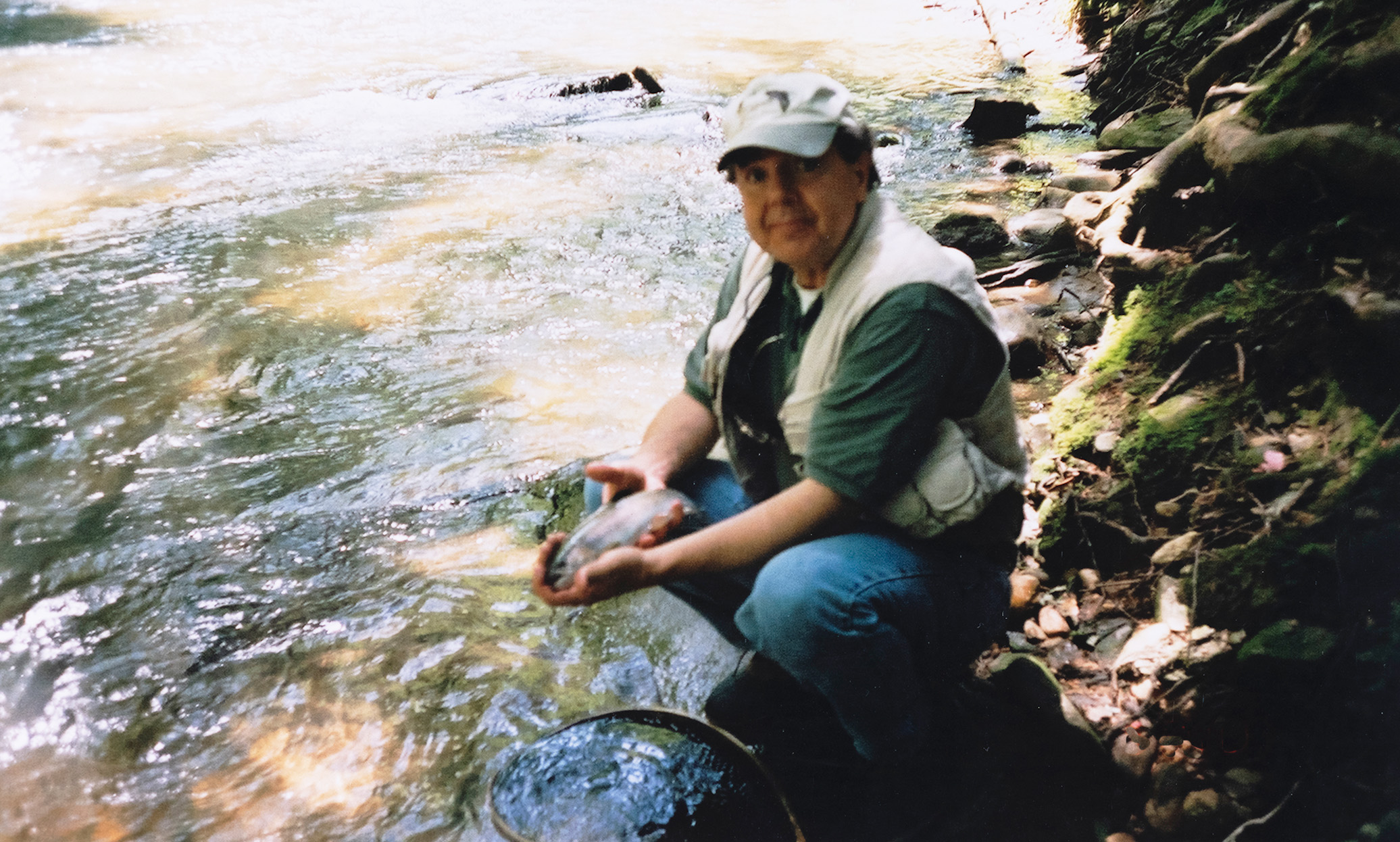 Thomas Stanley fishing in the North Georgia mountains. (Courtesy of the Stanley family)

The best proof that Stanley’s insights of the mid-1990s apply even now in these tumultuous times are the email letters that flow in regularly from readers around the world. “We continue to get emails saying my father’s books changed their life,” said Sarah. She quoted a recent email from a retired, self-employed accountant in Massachusetts whose father died when he was 15, and whose first job paid $20,000 a year. He is now worth over $10 million: “Reading your father’s book was a seminal moment in my pursuit of wealth,” he wrote. “It quite brilliantly clarified for me (light bulb moment) that my goal was not retirement, but rather financial independence. I have become the exact prototypical American millionaire that your father portrayed.”