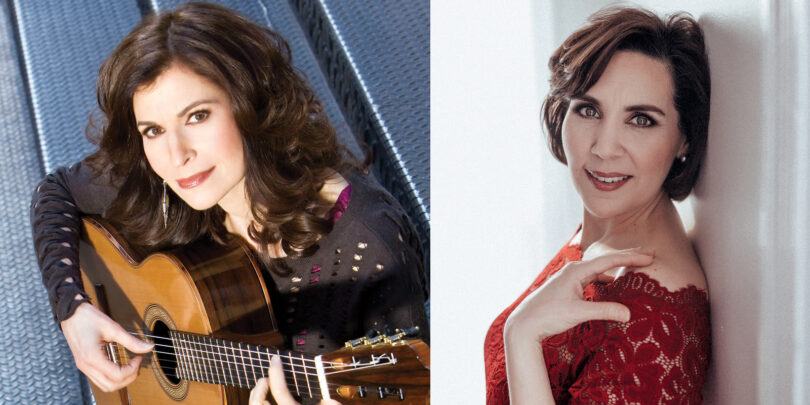 Hailed as “one of the best guitarists in the world” (Boston Globe), Sharon Isbin has received acclaim for her extraordinary lyricism, technique and versatility. Soprano Jessica Rivera possesses a voice praised by the San Francisco Chronicle for its “effortless precision and tonal luster.” The two Grammy winners will appear at the UGA Performing Arts Center’s Hodgson Hall on Nov. 21 at 3 p.m.

Their program of music from Spain, Latin America and the U.S. features seductive pieces by some of the most beloved Spanish and Brazilian composers. These include the honey-sweet Aria from Heitor Villa-Lobos’s Bachiananas Brasilieras No. 5 and Isaac Albéniz’s flamenco-flavored “Asturias” for solo guitar.

Multiple Grammy winner Isbin was named the 2020 Musical America Worldwide Instrumentalist of the Year, the first guitarist to receive the coveted honor in its 59-year history. Hailed as “the pre-eminent guitarist of our time,” she has been soloist with more than 200 orchestras, and has performed in the world’s finest halls across 40 countries. Her catalog of over 35 albums has sold nearly a million copies. She directs the guitar departments at the Aspen Music Festival and the Juilliard School.

The intelligence, dimension and spirituality with which Rivera infuses her performances on international stages has garnered her unique artistic collaborations with many of today’s most celebrated composers, including John Adams, Osvaldo Golijov and Gabriela Lena Frank, and has brought her together with such esteemed conductors as Gustavo Dudamel, Sir Simon Rattle, Esa-Pekka Salonen, Robert Spano and Michael Tilson Thomas. A major voice in the rich culture of Latin American music and composers, Rivera recently performed in Antonio Lysy’s Te Amo Argentina with Arizona Friends of Chamber Music and premiered Frank’s Conquest Requiem with the Houston Symphony and Chorus.

In advance of the Nov. 21 performance, UGA Presents hosts a screening of the award-winning documentary “Sharon Isbin: Troubadour” on Nov. 15 at 7 p.m. in the Performing Arts Center’s Ramsey Hall.

The one-hour film is an intimate look at the guitarist and her influential career. In the classical guitar world, long dominated by men, she is an out lesbian who has blazed a trail of commissioning new works and teaching at prestigious institutions. Interviews with major composers, her students at Julliard, and famous names such as Martina Navratilova, Janis Ian and Leslie Gore paint a picture of a fearless performer and tireless advocate for her often misunderstood instrument.

The screening is free and open to the public. Tickets are not required. (Isbin will not be in attendance at this event.)

For a complete list of UGA Presents performances, visit https://pac.uga.edu/organizer/uga-presents.

For information about the Performing Arts Center’s COVID-19 protocols, visit pac.uga.edu/safety-first. Flexible ticketing will be in place for all performances occurring through December 2021. Patrons may exchange tickets for another performance (including those in spring 2022) or receive a full refund until noon on the day of the performance, if occurring on a weekday, or by Friday at 5 p.m. if occurring on a weekend.