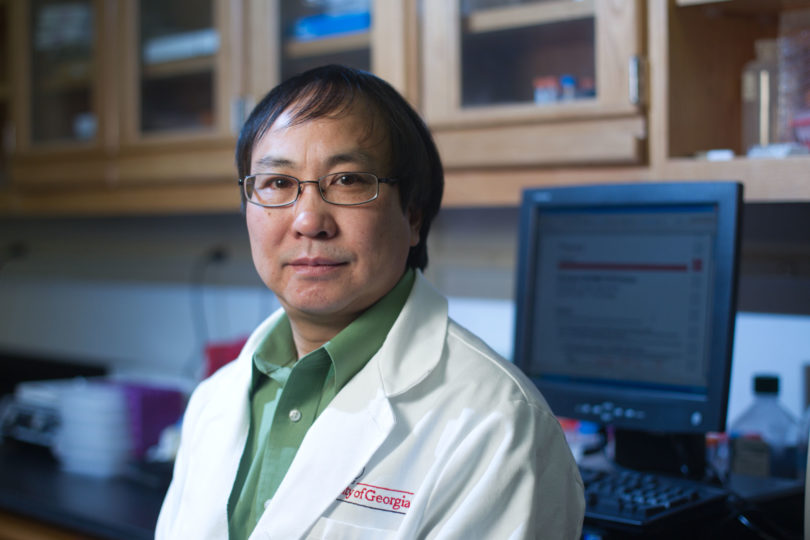 Zhen Fu started his medical training when he was a 15-year-old in China. He now works to help control rabies in the country. (Credit: Peter Frey/UGA)

The National Institute of Allergy and Infectious Diseases at the National Institutes of Health has awarded the College of Veterinary Medicine a $1.18 million grant to develop rabies vaccines. This award is the continuation of a previous four-year $837,000 grant issued by NIAID in 2002 to initiate the study.

Zhen Fu, professor of veterinary pathology, is the principal investigator of the study, along with Ralph Tripp, Georgia Research Alliance Eminent Scholar and professor of infectious diseases at the veterinary medicine college. Tripp will investigate the immunological aspects while Fu’s study seeks a less expensive and less invasive means of vaccinating humans and animals.

The proposed vaccine will use a genetically modified form of the live virus; one that will be potent enough to establish immunity with fewer doses, yet is very safe because the genetic modification makes the virus unable to cause the disease.

According to the World Health Organization, approximately 55,000 human deaths, primarily in Asia and Africa, are attributed annually to rabies. As a zoonotic viral disease that attacks the central nervous system, rabies infects domestic and wild animals. It may be transmitted through bites or, less commonly, through close contact with the saliva of infected animals on open areas such as skin scratches.

“We propose to develop a live form of the vaccine by incorporation of immune stimulatory molecules into the virus genome,” Fu said. “By doing so, we expect to develop a vaccine with greater potency yet reduced cost, because fewer doses will be required to establish immunity. These vaccines also can be used in domestic as well as wild animals to protect them from rabies infection.”

The proposed vaccines could potentially save millions of dollars worldwide. According to the national Centers for Disease Control, the estimated public health costs associated with rabies detection, prevention and control have risen to over $300 million annually.