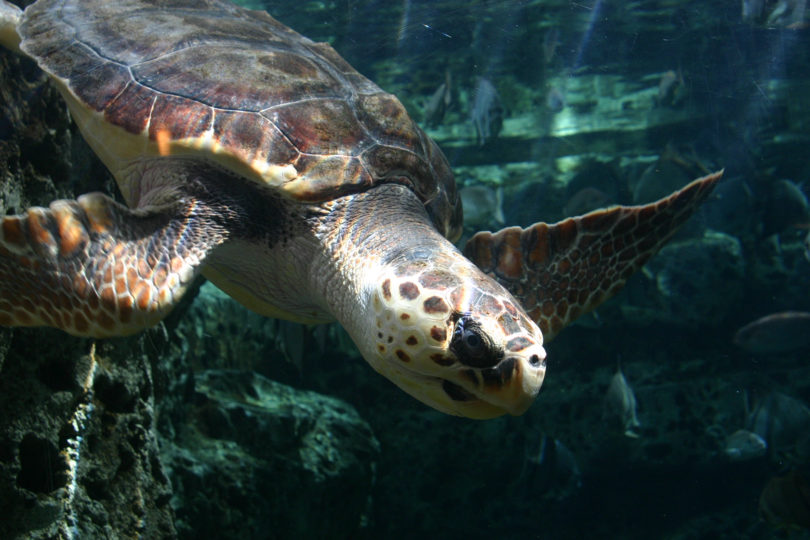 Athens, Ga. – University of Georgia researchers have been awarded a $1.3 million grant to continue genetically “fingerprinting” the threatened loggerhead sea turtles in Georgia, South Carolina and North Carolina. Using DNA fingerprinting, or “CSI for turtles,” researchers can identify turtle mothers and their offspring to gauge how well the loggerheads are recovering after decades of population decline.

Researchers currently don’t know how many loggerhead sea turtles are nesting in these three states. By collecting DNA from an egg in each nest as part of the Northern Recovery Unit Loggerhead DNA Project, they can use genetic techniques to identify nesting females and come up with the population numbers.

The project, of which the UGA Warnell School of Forestry and Natural Resources is a part, has been going on in Georgia since 2008. This latest grant allows UGA researchers to continue the sampling effort for another three years. The $1.3 million grant comes from the National Oceanic and Atmospheric Administration via the Georgia Department of Natural Resources.

“Many people aren’t aware that the southeastern United States is home to one of the two large loggerhead nesting populations in the world,” Nairn said, “so this population is absolutely critical to conservation of the species.”

Loggerhead sea turtles were put on the endangered species list in the 1970s. Found in the Atlantic, Pacific and Indian oceans, loggerheads are some of the largest and most visually striking turtles in the world. Once hunted for their meat and eggs, loggerheads also have historically been prone to being unintentionally entangled in fishing nets. Combined with naturally high mortality rates for small juveniles, this caused the turtle’s populations to decrease significantly worldwide.

During the 2013 nesting season, the Georgia Sea Turtle Cooperative counted a new record of nearly 2,300 loggerhead nests, up from a low of 358 in 2004.

Since 2008, Nairn’s team has received a total of $2.5 million to study the threatened sea turtles. Although researchers have used traditional flipper tagging to track turtles for decades, this method typically misses up to 20 percent of all females that nest on a beach each season. Researchers also discovered from previous studies that some females nest on several different beaches, which can lead to incorrect estimates about the turtle population. Monitoring all of the beaches where the turtles nest at night is also not feasible, and many of the flipper tags get lost eventually.

Genetically fingerprinting the nesting mothers avoids these problems, Nairn explained, and will help the researchers answer more questions about loggerhead population dynamics and whether their numbers are truly recovering.

Some of the questions researchers seek to answer with the DNA testing:
• How accurately do females return to their nesting beach from breeding season to breeding season?
• How many nests do they lay?
• How many years do turtles skip between re-migrations to nest?
• How many adult females remain in this threatened population?

The genotyping approach, or DNA fingerprinting, looks at genetic differences over many locations on the turtle’s chromosomes. Much like a human fingerprint, the genetic signature obtained using this approach is unique for each individual turtle.

“We use exactly the same technique as the FBI uses for human fingerprinting, only our markers are specific to the turtles,” Shamblin said.

Over the first two years of the study, UGA identified around 800 nesting mothers along the Georgia coast. Researchers continue to track those turtles, including where they’ve nested over the years and how often they’ve returned to nest.

An unexpected study finding is that sister turtles often don’t nest on the same island. Natal homing, or philopatry, means that turtles return to the region where they hatched to lay their own eggs. Most individuals exhibit strong nest site fidelity—or how precisely they return to the same nest site—by nesting over relatively short stretches of beach, but natal homing appears to be somewhat “loose” in the study’s population. Most sisters have been found nesting on different barrier islands.

“We still have a lot to learn about the accuracy of natal homing and why turtles select certain nest sites,” Shamblin said. “It appears that for this population the accuracy of homing may be relaxed because there is a lot of good nesting habitat along the southeastern U.S. coast.”