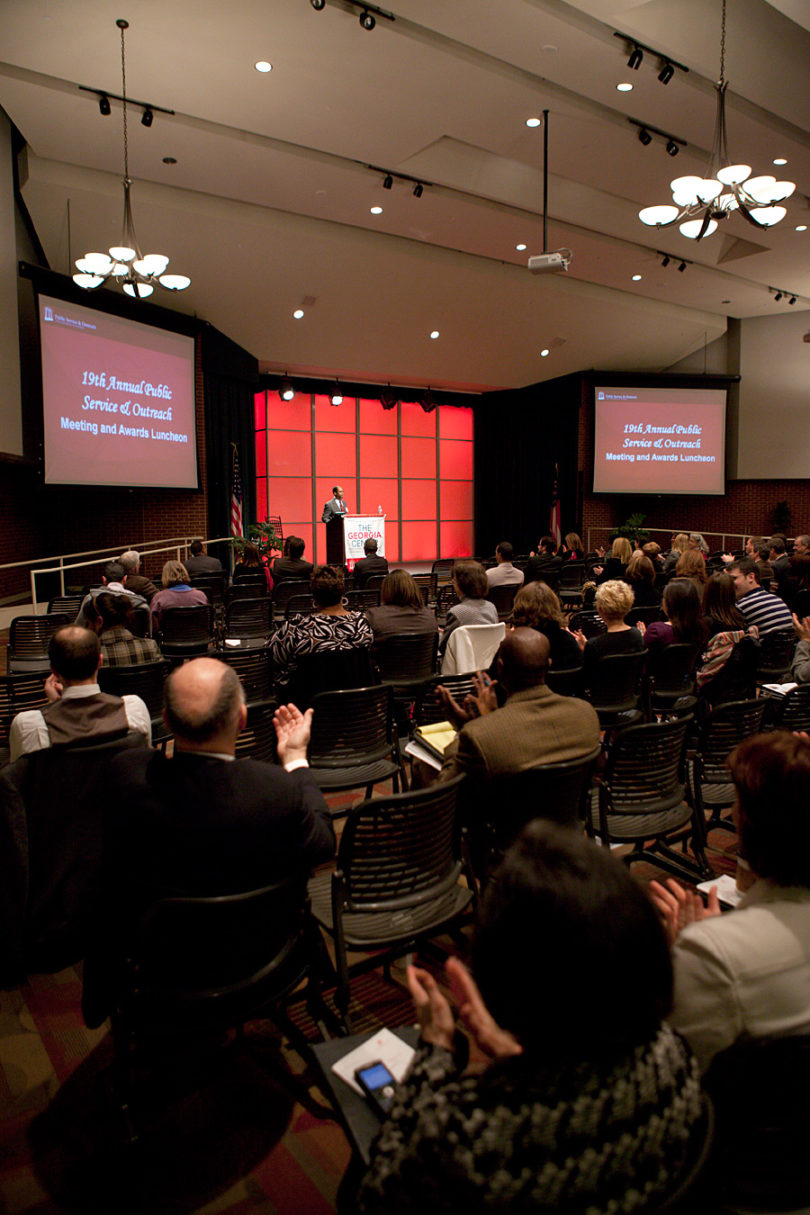 Keynote speaker Lee Torrence of United Way of Metropolitan Atlanta's Early Education Commission give his "Why Early Learning Matters: Improving the Availability and Quality of Early Childhood Education" speech during the 19th Annual Public Service and Outreach Meeting in the Mahler Auditorium at the Georgia Center for Continuing Education on Thursday

Speakers at the 19th annual Public Service and Outreach meeting and awards luncheon struck a balance between the past and future, calling on UGA employees not only to continue work that benefits Georgians, but to increase it.

Talks from Art Dunning, outgoing vice president for public service and outreach, and Lee Torrence, retired IBM executive and community activist, highlighted the conference, which honors the employees of the Office of Public Service and Outreach.

“The economic future of this state depends on what we do for children before kindergarten,” said Torrence.

Torrence is a member of the United Way of Atlanta’s Early Education Commission, which is dedicated to building a pilot preschool program for inner city Atlanta children with hopes of extending it throughout the state.

“What we know is that a child from a professional family enters kindergarten having heard 32 million more words than their counterpart receiving public assistance,” he said. “Your vocabulary at age 3 is a great indicator of what your language skills will be at age 9, which will affect your reading skills. And reading skills determine your ability to learn. What we’re finding is that there are tests that can show by age 3 how much learning that child will be able to accomplish in a lifetime.”

Those children become the leaders or prisoners of the state later, Torrence said. By introducing effective preschool programs that target at-risk children, the state can reverse an increasing trend toward incarceration for its residents and bolster its economic future.

“If you look at a third-grade child’s test scores and absenteeism rate, you can predict with 90 percent accuracy whether that child will graduate from high school. There are states in this country that forecast the number of prisons that will need to be built based up third-grade reading levels,” he said. “So the question is, what choice do we want to make? Do we want to invest in prisons—which, oh by the way, are not cheap—or do we want to invest in preschools?”

His remarks were followed by “Growth of Outreach: A 10-Year Retrospective,” a candid talk by Dunning that reflected on the progress and challenges faced by UGA employees during his tenure.

Demographic data has led the office to focus efforts on problems like poverty, education and a changing population that have plagued Georgia for years. Progress has been made, but there is no quick fix. Programs like the Latino Initiative and the Archway Partnership have helped secure Georgia’s future, but the university cannot alleviate any problems on its own, he said.

“Athens-Clarke County is one of the 91 poorest counties in the nation. But UGA cannot solve problems here alone,” he said. “We can only be a partner.”

“There’s been a great sense of collaboration from the leadership here on campus,” he said. “One of my great desires is that it stays intact.”

The annual meeting also included an awards ceremony. The Public Service and Outreach Staff Award for Excellence was presented to Annie Burgess, a housekeeping supervisor at the Georgia Center for Continuing Education Conference Center and Hotel, and Melanie Lee, administrative financial director of the Fanning Institute. Nancy Williams, an associate professor and director of the Master of Social Work Program’s admissions office, received the Scholarship of Engagement Award. The Walter Barnard Hill Award for Distinguished Achievement in Public Service and Outreach was presented to W. Don Shurley, extension coordinator for the department of agricultural and applied economics, and to Paul D. Wigley, county extension coordinator for Calhoun County. Mark Foster, researcher and senior public service associate at the Carl Vinson Institute of Government, received the Walter Barnard Hill Fellow Award for Distinguished Achievement in Public Service and Outreach.