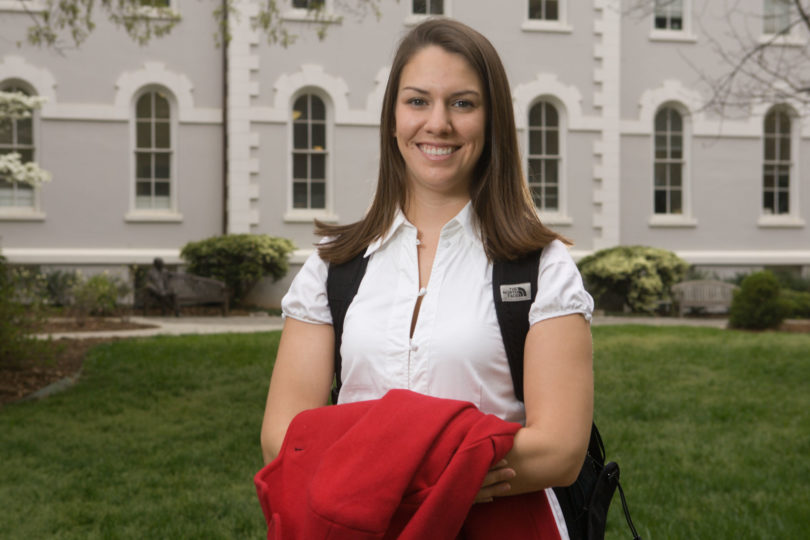 Vanessa del Valle, a UGA Honors student, has been selected as a 2008 Barry M. Goldwater Scholar, a prestigious national science award for sophomores and juniors excelling in mathematics, engineering and the natural sciences.

Del Valle, a junior biology and psychology double major from Alpharetta, was chosen among a pool of 1,035 candidates from across the U.S. who were nominated by their colleges and universities. The one- and two-year scholarships provide funding for tuition, room and board and other educational expenses worth up to $7,500 per year. Del Valle’s selection brings the total of UGA recipients to 33 since 1995. UGA students have been named Goldwater Scholars every year since 2001.

“The quality of the UGA student body has been reaffirmed by Vanessa’s receipt of a Goldwater Scholarship and the honorable mention citations awarded to Tyler and Tulsi,” said UGA President Michael F. Adams. “UGA students are among the best this nation has to offer, and I am proud of the recognition they are receiving.”

Del Valle conducted social neuroscience research under the guidance of Keith Campbell, a professor of social psychology, during her first two years as a research apprentice through the Honors Program’s Center for Undergraduate Research Opportunities. She has continued as a teaching assistant with the CURO apprentice program.

Now, as a Louis Stokes Alliance for Minority Participation Research Scholar, del Valle is investigating the molecular processes of enzymes associated with Type 2 diabetes, in which individuals are resistant to insulin, in the laboratory of Lance Wells, a professor of biochemistry and molecular biology.

Kelly’s mathematics research began two years ago, when he was invited to participate in the VIGRE or Vertical Integration of Research and Education Algebra Group, a research team made up of UGA faculty and students who collaborate on a single topic throughout the year. Kelly has continued his research, now in algebraic geometry, under the guidance of mathematics professor Elham Izadi.

Patel’s first research experience in the plant sciences began as a CURO apprentice in the laboratory of Scott Gold, a professor of plant pathology. After studying fungal genomics during her first year, she designed her own project that focused on developing a fungal pathogen that could be used as a biological agent to control Chinese privet, a harmful exotic weed in Georgia. Now as a teaching assistant, Patel is using her previous research experience to assist the current group of CURO apprentices. She is also continuing her research in the field of stem cells and is working in the laboratory of Steve Stice, a biomedical cloning scientist.