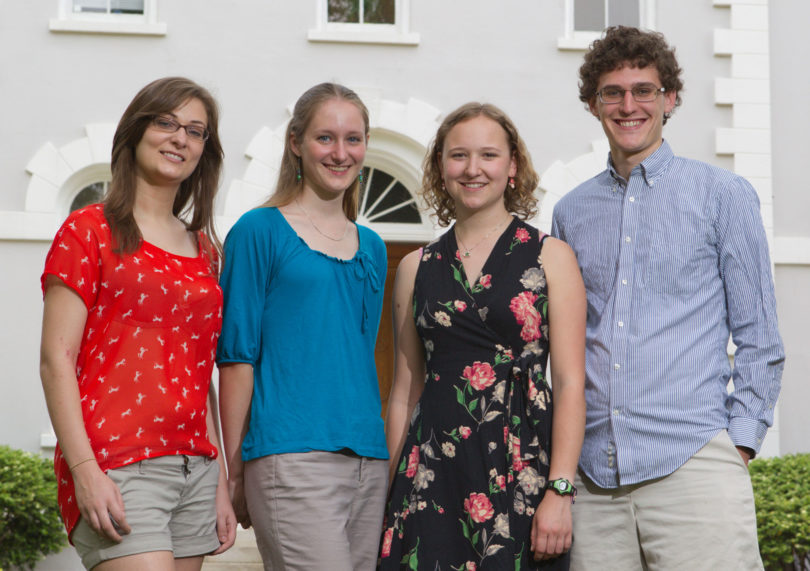 Four UGA undergraduates have been named 2012 Barry M. Goldwater Scholars. They are among 282 recipients of the one- and two-year scholarships that recognize exceptional sophomores and juniors in engineering, mathematics and the natural sciences.

“The continued success of UGA students in the Goldwater and other national academic scholarship competitions is further evidence of the overall quality of the student body, the commitment of the faculty to the intellectual development of those students and the very good work of the Honors Program in preparing applicants,” said UGA President Michael F. Adams. “I am very proud of Victoria, Marianne, Theresa and Buck; and I am confident they will represent the institution well as they pursue their studies in these critically important areas.”

The Barry M. Goldwater Scholarship and Excellence in Education Foundation provides a maximum award of $7,500 per year for university expenses such as tuition, fees, books, and room and board. Congress created the program in 1986 to honor the late U.S. senator.

“I am very pleased for these truly wonderful students,” said David S. Williams, associate provost and director of the Honors Program. “The fact that UGA is one of only four institutions in the nation with the maximum number of four Goldwater recipients this year underscores their individual and collective achievements.”

Ligon, who recently was awarded a UGA Foundation Fellowship, has participated in RNA immunology research in Rebecca and Michael Terns’ biochemistry and molecular biology laboratory as a CURO Honors Scholar and CURO summer fellow.

Stratmann, a member of the Honors Program and a 2011 CURO summer fellow, currently is working on her own inquiry developing a species distribution model and related location and surveying techniques for the endangered bog turtle. Her research mentor is vertebrate ecologist John Maerz.

Trible, also a UGA Foundation Fellow, has been studying the behavior of invasive South American fire ants found in Georgia with entomology professor Kenneth Ross. Trible also traveled to Costa Rica, carrying out his own self-designed project on the interactions between fire ants and coffee farms.