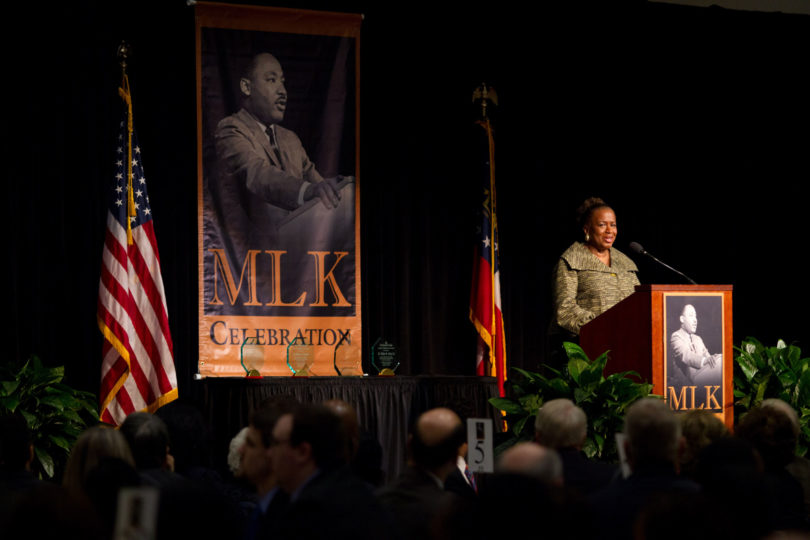 With voices in unison and hands held together, about 600 members of the UGA and Athens communities sang the civil rights movement anthem “We Shall Overcome” in an uplifting moment at the Martin Luther King Jr. Freedom Breakfast held Jan. 18 in Grand Hall of the Tate Student Center.

The annual town-and-gown breakfast, sponsored by UGA, Athens-Clarke County Unified Government and the Clarke County School District, is an opportunity to remember the legacy of the slain civil rights leader and to recognize civic leaders who promote change in their communities.

This year the sold-out breakfast came 50 years after King’s seminal “I Have a Dream” speech at the Lincoln Memorial and featured a keynote address by Monica Kaufman Pearson, a retired veteran anchor of WSB-TV’s Channel 2 Action News in Atlanta and a current graduate student in the Grady College of Journalism and Mass Communication.

The Freedom Breakfast was coordinated by UGA’s Office of Institutional Diversity and included contributions from community leaders. The most thunderous contribution came from the Cedar Shoals High School drum line, which delivered a boisterous musical performance to open the ceremony. Other Clarke County School District students showed their commitment to King’s vision in a video presentation. During the video, students read essays addressing their own dreams and visions for justice and peace.

UGA President Michael F. Adams said of the event, “It’s a time when we recognize a number of contributions that people in our community have made in making this university, the Athens-Clarke area and the entire region a better, and more special, place to live.”

Adams pointed to some of UGA’s strides in embracing diversity with its increase in the minority student population from 8 percent to 23 percent and an increased presence in university minority leadership, all while the university also was raising its academic profile.

Four awards were presented at the breakfast to community members working toward equality, diversity and justice.

Mark A. Farmer, professor of cellular biology and chair of biological sciences at UGA; Walter R. Allen Sr., a former adjunct professor in the educational psychology department; and Stewart T. Zellars, a senior majoring in economics and statistics, received the 2013 President’s Fulfilling the Dream Award.

Farmer was recognized for his efforts to get students from ­underrepresented groups interested in science, technology, mathematics and engineering. Allen was honored for working with students interested in international education and assisting American and African students in finding scholarships.

Zellars, an Augusta native, is president of the Black Educational Support Team based out of the Office of Multicultural Services and Programs. The program partners African-American freshmen with upperclassman leaders.

The Impact Award was presented to Tom and Kathy Kelly. The Kellys are the founders of the Greensboro Dreamers, which helps young people in the nearby town graduate from high school and succeed while in college.

That rousing chorus of “We Shall Overcome” was led by Pearson during her keynote address.

Pearson delivered a stirring speech to the audience at the Grand Hall, where she challenged them to commit to serving their community and to continue King’s dream for freedom and equality through personal efforts to achieve greater diversity.

Pearson noted that King’s primary message was to be a “servant of God.”

That means, she said, “doing whatever it takes to serve God on Earth (and) to be a blessing to others in all that we do.”

Alluding to a lesser-known King speech, Pearson said it’s difficult to help others, particularly those of different races, because we haven’t made the effort to understand them. And while workplaces and school settings have made strides in integration since King’s “I Have a Dream Speech,” that atmosphere is rare in churches and in social settings.

“Until we share more than our jobs together, we truly will never know each other,” she said.

She challenged the audience to make bold strides to integrate diversity into their lives by inviting people of different backgrounds into their social settings.

At a few points in her address, Pearson broke into song to drive home her points. By the end of her address, she had the room standing with her singing, “Oh deep in my heart, I do believe, we shall overcome someday.”