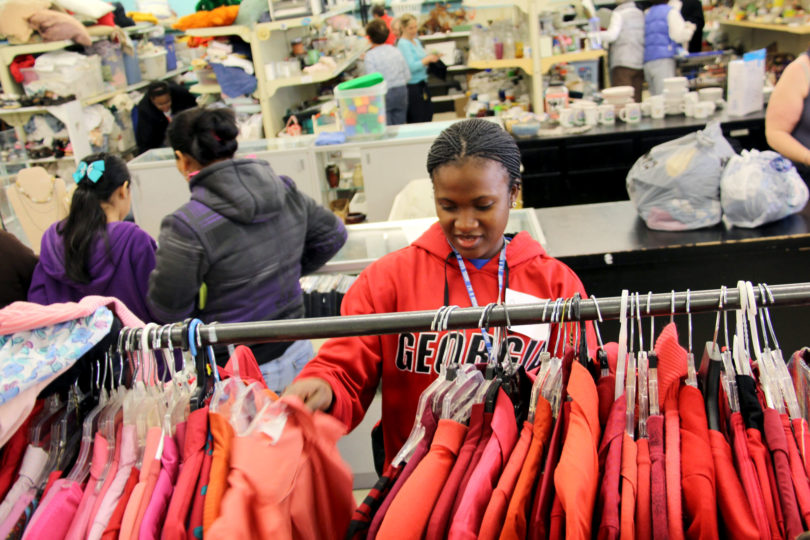 The half dozen or so UGA students who descended on the Project Safe thrift store on Jan. 21 weren’t there to shop.

Instead they, and a small contingent of volunteers from a local Presbyterian church, spent a few hours at the nonprofit agency’s Hawthorne Avenue location cleaning up, sorting and re-hanging clothes as well as straightening up sections of linens, housewares and toys. It was their way of giving back to the local community on the Martin Luther King Jr. national holiday.

“I love to volunteer, and UGA provides really good opportunities to volunteer in Athens,” said Georgina Nembhard, a graduate student in the College of Education.

Although this was Nembhard’s first time as a volunteer at the Project Safe thrift store, it wasn’t the first time the native of Ocean Township, N.J., has been involved in a local service project. During her time as a student-she earned her bachelor’s degree from the College of Family and Consumer Sciences in 2011-Nembhard has volunteered at a homeless shelter, a food bank and an elementary school.

The thrift store and P.S. Too Boutique, its sister location on Gaines School Road, are social enterprise programs of Project Safe, Inc., a nonprofit organization working to end domestic violence.

As part of Athens-Clarke County’s 11th annual King Day of Service, more than 100 UGA students worked on projects at seven sites coordinated by Community Connection and UGA’s Center for Leadership and Service. Some students worked in gardens while others pressure washed the home of a senior citizen and did other small repair work around the house. Still others removed stickers in the downtown area as part of Keep Athens-Clarke County Beautiful or helped out at United Hospice of Athens.

For Kathryn Macias, a junior from Warner Robins majoring in communication studies, and Sarah Hughes, a junior from Norcross studying international affairs, their stint at the Project Safe thrift store gave them a chance to complete a service project in Athens. As site leaders for ­IMPACT, a student service organization, they usually spend their time with other UGA students in weeklong service-learning projects across the U.S. Volunteering at the thrift store was an opportunity to serve locally.

“I’ve never volunteered at the thrift store before,” Macias said. “It was a chance to do something new.”

The experience was new for Fantasia Williams, too. The second-year, pre-business major from Valdosta works with the university’s Service Ambassador organization, which allows UGA students to connect with the Athens community by identifying and fulfilling a need for service.

“Our aim is to build bridges between the campus and local communities,” she said. “Helping out at the thrift store reinforces that goal for me personally.”