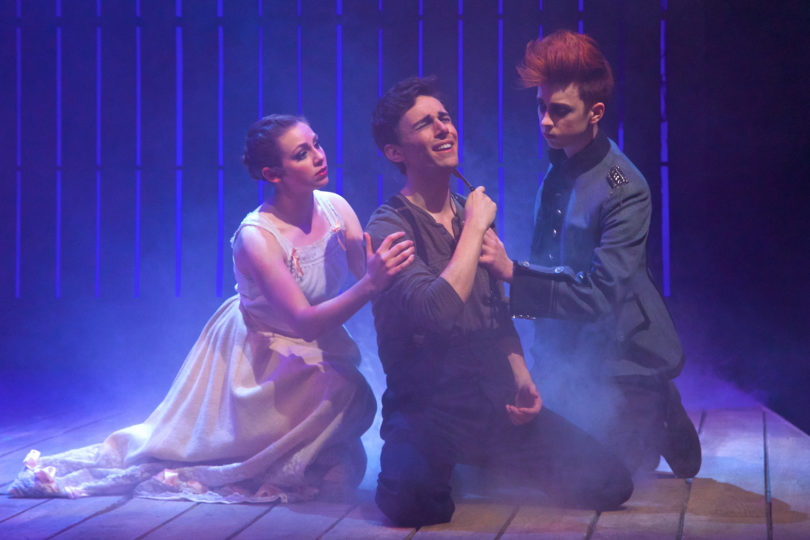 Athens, Ga. – University Theatre at the University of Georgia announces its 2014-2015 lineup, which includes the 2012 Tony Award Winning “Raisin in the Sun” spinoff “Clybourne Park,” a stage adaptation of literary and film classic “The Great Gatsby” presented as part of the UGA Spotlight on the Arts Festival, Shakespeare’s classic comedy “Much Ado About Nothing” and the biting satire “Mein Kampf.”

This year’s season offers new and old classics, from Shakespeare to Ibsen’s “Hedda Gabler” and adaptations and spin-offs of classic literature. It also contains new offerings, such as Catherine Trieschmann’s “Hot Georgia Sunday” and George Tabori’s “Mein Kampf,” a satirical sendup of Adolf Hitler’s failure as an artist that led him to pursue his other dream—of taking over the world. “A Lesson Before Dying,” based on the Ernest Gaines novel examining the life of an innocent man on death row in 1948 Louisiana, rounds out the pack.

“In one of the most exciting and diverse seasons we’ve ever presented, we’re striking a balance between well-known and beloved titles—such as “Gatsby,” “Hedda Gabler” and “Much Ado”—and really fantastic plays that many people probably have never encountered,” David Saltz, head of the UGA department of theatre and film studies in the Franklin College of Arts and Sciences. “In addition, we’re featuring Trieschmann, a UGA alumna with a growing national reputation, and George Tabori, who is renowned in Germany as one of the major 20th century playwrights but almost unknown here in the United States.”

“Mein Kampf” will be presented in conjunction with the international conference, “George Tabori and the Theatre of the Holocaust,” hosted by UGA in honor of the 100th anniversary of Tabori’s birth.

The season consists of four University Theatre Mainstage productions and three Studio Series presentations that offer live theatre in a vibrant, stripped-down format. Tickets for Mainstage productions are $16 and $12 for UGA students. Studio Series tickets are $12 and $7 for UGA students. Subscriptions, which save 25 percent off of the single ticket prices, are on sale now through the Performing Arts Center. For tickets and subscriptions, call 706-542-4400 or toll free at 888-289-8497 or order online at www.drama.uga.edu.

“Clybourne Park” by Bruce Norris
Guest director Paul Pierce
Cellar Theatre Sept. 25, 26, 30 and Oct. 1-3 at 8 p.m.; Sept. 28 and Oct. 5 at 2:30 p.m.
Winner of the 2012 Tony Award for Best Play, an Olivier Award and the Pulitzer Prize, this satiric comedy about race and real estate spins off of Lorraine Hansberry’s “Raisin in the Sun” to follow one house over 50 years-from the era of segregation to gentrification.

“Hedda Gabler” by Henrik Ibsen
Directed by Ray Paolino
Studio Series
Cellar Theatre Oct. 14-19 at 8 p.m. and Oct. 19 at 2:30 p.m.
This drama features one of the most fascinating and complex characters in dramatic history, Hedda Gabler, who yearns for independence and passion in a repressive world-no matter the cost to anyone in her way.

“The Great Gatsby” adapted by Simon Levy from the novel by F. Scott Fitzgerald
Directed by T. Anthony Marotta
Fine Arts Theatre Nov. 6-8 and 12-14 at 8 p.m.; Nov. 9 and 16 at 2:30 p.m. A special matinee will be held for area schools Nov. 11 at 10 a.m.
A self-made millionaire and the socialite he loves personify the Jazz Age in this new adaptation of F. Scott Fitzgerald’s famous novel of glamour, greed and excess.

“A Lesson Before Dying” by Romulus Linney based on the novel by Ernest J. Gaines
Directed by George Contini
Studio Series
Seney Stovall Theatre Feb. 3-8 at 8 p.m. and Feb. 8 at 2:30 p.m.
The wrenching and inspiring story is about an innocent man condemned to death by electric chair in 1948 Louisiana. His failed defense portrayed him as less than human, but he learns to die like a man.

“Mein Kampf” by George Tabori
Guest director Del Hamilton
Cellar Theatre Feb. 19-21 and 24-28 at 8 p.m. and March 1 at 2:30 p.m.
This bold hilarious farce, penned by one of Germany’s greatest 20th century playwrights, portrays Adolf Hitler as a young, struggling artist secretly yearning to take over the world and whose life is changed by a chance encounter with a Jewish Bible seller.

“Hot Georgia Sunday” by Catherine Trieschmann
Directed by Geoffrey Douglas
Studio Series
Cellar Theatre March 24-29 at 8 p.m. and March 29 at 2:30 p.m.
This dark comedy tells a tale of lust, betrayal and the limits of faith in a small Georgia town from a fierce and theatrical new voice.

“Much Ado About Nothing” by William Shakespeare
Directed by Kristin Kundert-Gibbs
Fine Arts Theatre April 9-11 and 15-18 at 8 p.m., April 19 at 2:30 p.m. A special matinee will be held for area schools April 14 at 10 a.m.
Shakespeare’s beloved comedy features romantic hijinks and misunderstandings when soldiers return from war to the women who are charmed by men in uniform-or who, like the wittily disdainful Beatrice, profess to be immune to their charms.

For more information on the University Theatre and the UGA department of theatre and film studies, see http://www.drama.uga.edu/.