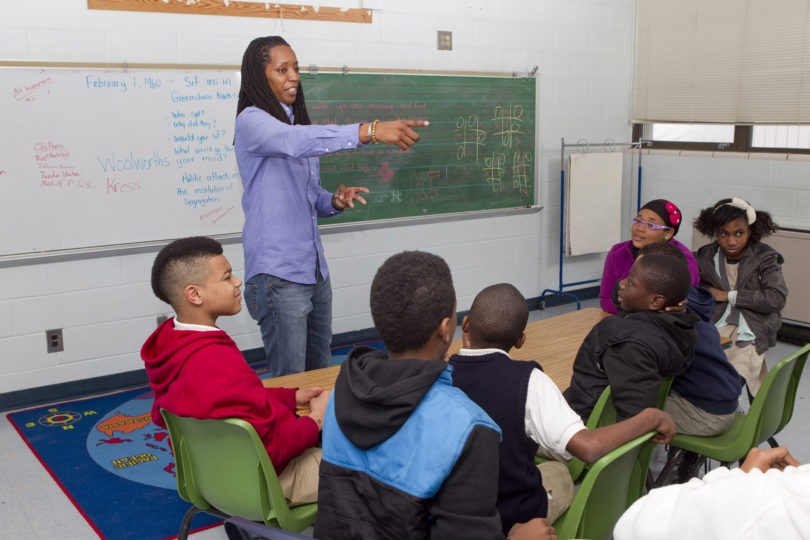 Bettina Love, an assistant professor of educational theory and practice in the College of Education, conducts scholarship that focuses on the ways in which urban youth negotiate hip-hop music and culture to form social, cultural and political identities.

A continuing thread of her scholarship explores new ways of thinking about urban education and culturally relevant pedagogical approaches for urban learners. She is a founding board member of Atlanta Word Works, an empowerment program that engages youth through creative writing and spoken word. She also served on the founding board of the Kindezi School, a charter school that champions alternative teaching methods.

Love has authored a book, seven peer-reviewed journal articles and seven book chapters. Her first book, Hip Hop’s Li’l Sistas Speak: Negotiating Identities and Politics in the New South, provides important perspectives on how to better support young black women both in and out of school.

Andrew Park, an assistant professor in the Odum School of Ecology, engages in interdisciplinary and groundbreaking research to advance understanding of infectious diseases.

His 2009 paper in Science discussed a rare example of the connection between parasite evolution and outbreak dynamics in host populations, which involved synthesizing a large amount of isolated experiments combined with statistical modeling, anti-genic cartography and mechanistic modeling to illustrate the degree to which a few mutations in a virus can trigger outbreaks via their effects on individual hosts.

Recently, he has been establishing how environmental factors, such as climate and land use, influence disease outbreaks in human and animal populations. His lab demonstrated a novel mechanism in Lyme disease in which climate-driven tick activity drastically can change which version of the parasite will prosper across the U.S. landscape, helping to explain the burden of disease in different regions. He also has led studies on hemorrhagic disease in deer.

Jessica Rodell, an assistant professor of management in the Terry College of Business, conducts research that cuts across several different fields of study. One is employee volunteering, a nascent literature that examines why employees devote time and skills to volunteer groups and how such activities impact their relationships with their employers. Rodell is one of a handful of scholars at the forefront of this intriguing area of research.

She also conducts work in some of the more well-established areas of management, including the concept of justice, which examines what causes employees to feel treated fairly and how such perceptions impact job attitudes and behaviors. She also studies the concept of personality, which explores the traits and predispositions that explain characteristic patterns of emotions, cognitions and behaviors among employees.

Rodell has set the standard for research productivity among junior faculty, publishing six top-tier articles in the past four years.