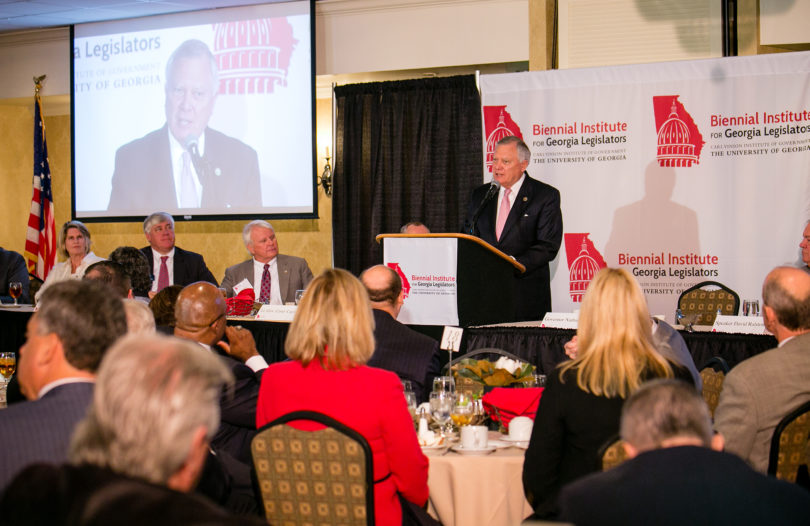 Deal addressed legislators on the third and final day of the Biennial, coordinated by the University of Georgia’s Carl Vinson Institute of Government to help lawmakers prepare for the next legislative cycle. The governor cited evidence of Georgia’s success.

• For the fourth consecutive year, Site Selection magazine named Georgia the best state in the country to do business.
• In fiscal year 2016, the Department of Economic Development brought more than 25,000 new jobs to Georgia, a $4.4 billion capital investment.
• Also in fiscal year 2016, state revenue exceeded projections by 3.2 percent to reach 9.4 percent.

“While much of the nation is seeing an economic slowdown, Georgia is moving forward,” Deal said.

Deal’s speech concluded the Biennial Institute, which continues to be an anticipated event on the Georgia political calendar for veteran and freshman legislators to come together as a group in advance of the legislative session, which begins Jan. 9.

“The challenges of running state government are great,” Deal said. “Everybody has a place and an expertise that you should share.”

The Biennial officially began Dec. 4 at the UGA Center for Continuing Education with welcoming remarks from Speaker of the House David Ralston, Lt. Gov. Casey Cagle, UGA President Jere W. Morehead and Institute of Government Director Laura Meadows. Retired Gen. Mark A. Welsh III, former Air Force chief of staff, delivered the keynote address on leadership reminding legislators that they took an oath of office on behalf of all citizens.

Almost all of the state’s 56 senators and 180 representatives attended the Biennial Institute, including more than two dozen who will begin serving their first terms in the legislature in January. The Biennial offered those freshman legislators the chance to network with their new colleagues and learn more about key matters they will face as they begin to represent their constituents.

The Carl Vinson Institute of Government, a UGA Public Service and Outreach unit, has coordinated the Biennial for 58 years, working with the Georgia General Assembly to organize and assemble the resources and expertise needed to carry out the planned events. The Institute provides customized assistance, applied research and professional development for government leaders and employees across Georgia and internationally.

The Biennial has always been held at the UGA Center for Continuing Education, also a UGA public service and outreach unit.