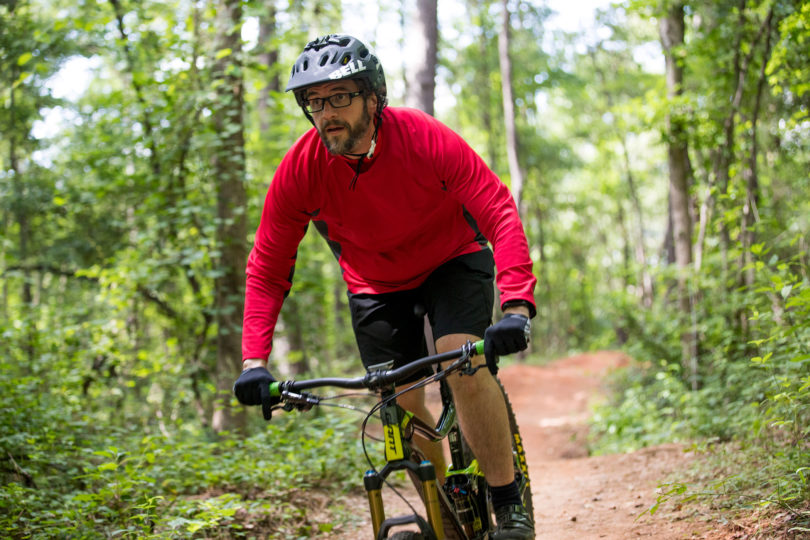 When Aaron Bemis switched from working in the College of Veterinary Medicine as a pharmacy technician to a desk job in EITS, the sedentary position took a toll on his health.

“I went from heavy lifting to sitting all day, and the weight just piled on,” said the application analyst. “When I transferred over to Admissions, it was a completely different environment because I’m now around counselors who are young, fresh out of college, super fit and athletic. I said, ‘OK, I have to make a change.’ ”

Over the course of about two years, Bemis shed more than 150 pounds and adopted a healthier lifestyle. When he found out UGA was participating in the University System of Georgia’s HealthTrails Challenge this past spring, he was all in.

“On Day 1, I figured out all the daily maximums to stay No. 1 throughout the whole thing, and those became my goals,” he said.

And his approach worked. Bemis tied Justin Sackett, a systems administrator associate in EITS, for first place in the competition at UGA, with each of them logging 1,226 virtual miles.

HealthTrails is a USG-wide wellness program that encourages healthy lifestyle choices like exercising, practicing self-compassion and sleeping six to eight hours a night.

Participants are given points that help them traverse at least 400 miles of virtual trails. A variety of activities like gardening, bowling and biking could be converted into virtual miles using the step conversion guide on the HealthTrails website. Participants could gain extra “miles” by drinking 10 glasses of water per day, getting enough sleep, performing acts of kindness and answering health-related questions.

Almost 1,000 UGA faculty and staff participated individually and in teams of up to 10 people, completing more than 338,000 total virtual miles, said Kizmet Adams, UGA liaison for the HealthTrails Challenge. The top finishing team alone traveled more than 10,000 miles, which averaged out to almost 27 virtual miles per team member every day of the 42-day challenge.

“I had never tried a walking challenge like this before, and the extra aspects of drinking more water and doing kind deeds appealed to me,” said Natalie Beavers, a member of the winning team, Who Let the Dawgs Walk! “The experience helped to build relationships within our division, as Bulldog Print + Design had just moved out to the Administrative Services Warehouse and the team our director put together had someone from almost every department. We were able to get to know some of our new co-workers in a much more personal way.”

Beavers finished eighth in the individual challenge with 1,208 virtual miles, and her teammate Vance Silcott came in fifth with 1,218. Bemis’ team, UGA Admissions, landed fifth in the team competition.

Seeing how popular the competition was on campus was a major highlight of participating for Bemis.

“The number of people who participated was overwhelming,” he said.

Those who skipped the spring challenge have a chance to join in on the next round of the health competition, which began June 19. Registration is open until July 17 at http://usgwellbeing.healthtrails.com/. The last day to log miles for the summer competition is Aug. 16.

Beavers and her team already are looking forward to competing in the next round this summer. As for Bemis, he’s game to compete again, but the drive to “smash” the daily activity goals isn’t quite as intense this time.

“It’s definitely something I’ll do again but not at that first-place winner level,” he said. “It was fine during the week, but the weekend was intense. There were times it would be 9 o’clock at night and I’d go, ‘I’ve got to go get 2,000 steps.’ And I’d be outside running up and down the road I live on or something just to get those steps in.”