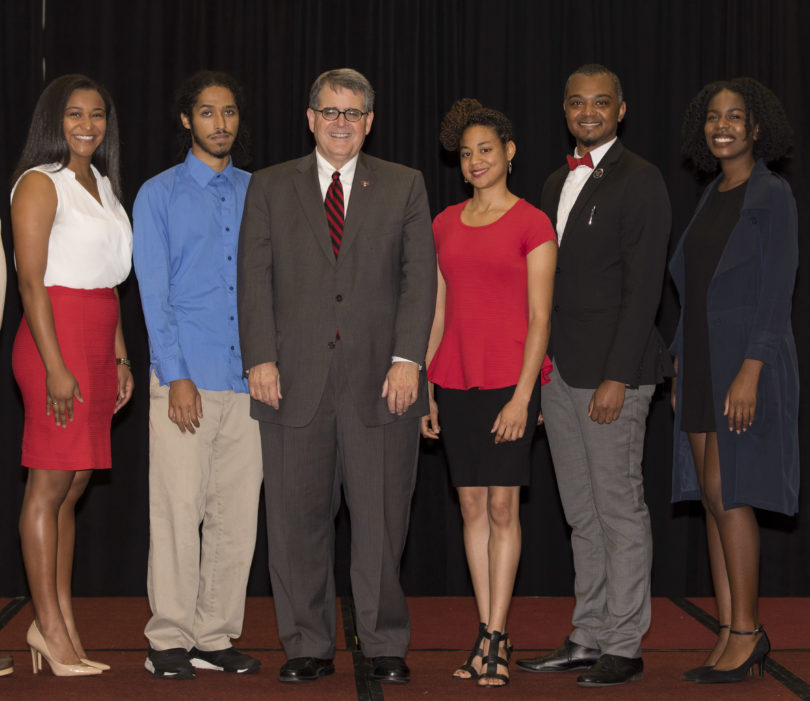 Pictured from left are Natalie Morean, Khalid Ziad, UGA President Jere W. Morehead, Camara Carter, Marques Dexter and Magali Lapu. The students, including Amaja Andrews, who is not pictured, are 2018 recipients of scholarships from the university’s Black Faculty and Staff Organization. (Photo by Andrew Davis Tucker)

Speaking at the event, UGA President Jere W. Morehead told those in attendance that students are what make the university special and that need-based scholarships fulfill an important role in helping some students realize their educational goals.

Keynote speaker Maurice Daniels, dean emeritus and professor emeritus of UGA’s School of Social Work, was a founding member of the BFSO.

He spoke about the beginning of the organization and the advocacy role it played in the creation and development of the department of Minority Services and Programs, the Institute for African American Studies, the African American Cultural Center, the Office of Institutional Diversity, the Presidential Minority Advisory Committee and several university-wide initiatives to recruit and retain African American faculty, staff and students. Daniels said that there is more work to be done for equality.

“We are the beneficiaries of the struggles and sacrifices of the Hamilton Holmes, the Charlayne Hunters, the Mary Frances Earlys and the Donald Hollowells,” Daniels said. “It is our duty to try to build on the ­foundation that these pioneers so aptly laid before us.”

Proceeds from the luncheon, held Sept. 19 in Grand Hall of the Tate Student Center, go toward the BFSO scholarship fund and programming. At the luncheon, a total of $3,000 in scholarships was awarded to six ­students, according to Susan M. Williams, vice president of faculty for BFSO and chair for the scholarship committee.

Williams, a faculty member in the College of Veterinary Medicine, said the student scholarship selection process included reviewing essays, extracurricular activities, honors and recognitions, GPA and letters of recommendation. Each awardee was presented with a $500 scholarship.