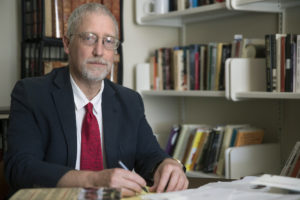 “Alan Taylor is a ‘historian’s historian’: He compiles, curates and extracts information from multiple, minor sources to write masterpieces,” said Matt Auer, dean of the School of Public and International Affairs. “His prize-winning work spans the early political life of this nation. Professor Taylor has been particularly effective at adding nuance to the simplified and sanitized history lessons we typically learned as children and young adults. We are excited to hear him discuss the contest of ideas and interests at play in the formation of the U.S. Constitution.”

Taylor holds the Thomas Jefferson Chair in American History at the University of Virginia and is a member of the American Academy of Arts and Sciences. He is the author of several books about the Colonial history of the U.S., the American Revolution and the early American Republic. Taylor has won two Pulitzer Prizes and the Bancroft Prize.

“We are delighted to have someone of Taylor’s stature join us for Constitution Day,” said Keith Dougherty, SPIA professor of political science. “Taylor is one of the most widely recognized names in the study of early American history.  He is an absolute expert on the American founding and a truly engaging speaker.”

In addition to the lecture, historical documents and materials related to the American founding and U.S. Constitution will be on display at the Chapel from the Hargrett Rare Book and Manuscript Library.