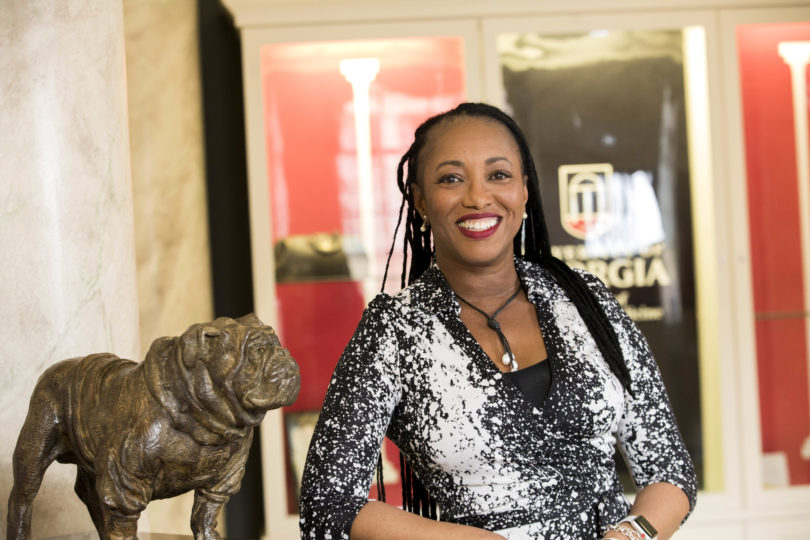 Paige Carmichael’s involvement at UGA extends beyond the College of Veterinary Medicine. Active in several organizations on campus, she also visits schools in the community to attract underrepresented students to the university. (Photo by Dorothy Kozlowski)

For Paige Carmichael, the division between teaching and mentoring is nonexistent.

“Teaching and mentoring overlap,” said Carmichael, a professor in the pathology department at the College of Veterinary Medicine. “They’re both about forming bonds.”

As an undergraduate, Carmichael wanted to be a clinician. She went into veterinary medicine because the profession has more than 20 animal specialties that translate to their human counterparts. She wanted to study disease to understand what caused it.

As an undergraduate in the early 1980s, Carmichael learned that the HIV outbreak was serious. Cats had a similar disease that caused immune suppression and cancer, and Carmichael first planned to study cats, thinking that a cure in cats could translate to a cure in humans. But her career goals changed, which is what inspired her to become a mentor.

“If I had known then what I know now, the journey would have been easier,” she said. “I want to help people who want to go down a similar pathway with their own goals.”

Carmichael received her Doctor of Veterinary Medicine degree from Tuskegee University’s School of Veterinary Medicine in 1987. She became a temporary instructor at UGA’s Tifton campus. There, her co-workers convinced her she was capable of getting her doctorate, and she entered a combined pathology residency/Ph.D. program. She earned the doctorate from UGA in 1993 and became a board certified pathologist in 1995.

“I knew I could make a living and enjoy doing it, since I was following a passion,” she said.

Teaching, Carmichael said, satisfies more than research or receiving tenure. She gets what she refers to as a “teacher’s high” when she witnesses her students learning.

Carmichael’s outreach takes her out into the Athens community. She has visited different schools to attract underrepresented students to the university.

“We want to make UGA an inviting place for them,” she said. “We want to get students into the pipeline of rural veterinary medicine and send them back out into under-served areas so they can inspire others to go to school.”

She has won many awards throughout her career, including the Lilly Teaching Fellowship, the Carl Norden-Pfizer Distinguished Teaching Award, the Tyler Award for Teaching Innovation, the Iverson Bell Award, Tuskegee University’s Outstanding Alumnus Award and many others. She was the first African American professor at UGA to receive the Josiah Meigs Distinguished Teaching Professorship. Most recently, Carmichael was awarded the 2019 President’s Fulfilling the Dream Award.

“It was a dream in itself,” Carmichael said. “I attend the banquet every year. It’s a way to give back. The university has close ties in the Athens community, and it’s wonderful to see that commitment to the university recognized.”

Carmichael’s involvement at UGA extends beyond the College of Veterinary Medicine. She is on the board of the UGA Athletic Association and the board of the Georgia Museum of Art. She helped with the museum’s Black History Month dinner, which has grown to accommodate 230 people. She co-started the Teaching Academy Fellows Program to help early career faculty become more effective teachers.

“It’s bringing people who are different together and making them comfortable together, so they can understand each other,” she said. “You create empathy and respect when you actually listen to the other side.”