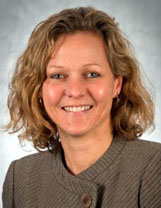 As chief compliance officer for Johnson & Johnson, Ashley Watson says she wears two hats. She’s not only a business partner, but she also steps in if there is wrongdoing and makes sure it’s addressed.

Watson, who earned a Juris Doctor from the UGA School of Law in 1993, spoke about her role and the role of corporations during the annual Ethics Week Lecture, held Nov. 4 at the Chapel.

“As you grow and become leaders in our communities, you’re going to be confronted with challenges,” she said. “If you start exercising those muscles now, you’re going to be in a better position later when you may have some really big decisions to make.”

According to Watson, that’s just one way the role of the corporation is shifting. Now, the corporation has to focus on its shareholders, its customers, its employees, its suppliers and its communities. Successful companies find a balance and put all of these constituents at the forefront of their decision-making while understanding that their legal obligation is to the shareholders.

Watson said that companies can’t underestimate the value of input from all stakeholders.

Sponsored by the School of Law and the Terry College of Business, the lecture was designated as one of the university’s Signature Lectures, which features speakers noted for their broad, multidisciplinary appeal and compelling bodies of work.

The lecture was held as part of the university’s observance of Ethics Awareness Week Nov. 11-17, which is part of the institution’s ongoing effort to promote an ethical culture on campus and raise awareness about ethics resources available at UGA. This week was designated by the University System of Georgia across all USG institutions as an important reminder of shared core values of integrity, excellence, accountability and respect.

Resources on compliance, ethics and reporting are available at http://www.hr.uga.edu/bor-ethics-training. Faculty and staff can report fraud, waste, abuse and other ethical concerns at https://uga.alertline.com/gcs/welcome or by calling 1-877-516-3467.