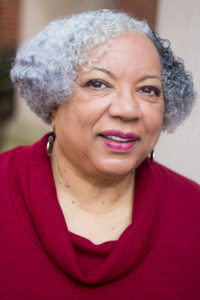 To move forward, we have to be mindful of the past, said Freda Scott Giles at the Founders Day Lecture on Jan. 28.

“Now, that doesn’t mean you get mired in the past, but you have to be mindful of the past,” said Giles, an associate professor emerita of theatre and film studies and African American studies. “When we look back at the past, if we give it a good look, we may see that we have missed something that needs to be brought forward.”

To illustrate her point, she used the life of W.E.B. Du Bois,  the first African American to earn a Ph.D. from Harvard. A social scientist, Du Bois is credited with being a pioneer for applying scientific knowledge to the field. He was a historian and a writer of social science and nonfiction books, as well as novels, poetry and plays.

“When he first became an academic, Du Bois thought empirical evidence could affect the change he hoped for his people,” Giles said. “He soon found out that is not enough. Racism is not rational, so rational means to combat it are not sufficient. The power of story can move where the power of science cannot.”

“When you look back, you don’t have to buy in,” she said. “If we’re not going to engage, we can’t get the other side. We’re in a period now where we’re being steeped in anger. We’re almost being marinated in it. We don’t have to respond that way. That’s what I love about the potential of being in a place of study. You have the potential to fight in a good way over these ideas. We have to look, even if we don’t enjoy looking.”

Giles believes in the importance of Sankofa and the humanities.

Sankofa is an Akan symbol that represents the proverb, “It is not taboo to fetch what is at risk of being left behind.” The idea is represented by the Sankofa bird, whose head turns toward the past, but its feet point toward the future.

“In looking back, even over what seems to be familiar territory, we might find something that has been overlooked that can give us a new perspective, and with that idea, lead us into a better future,” she said. “And also, the arts are essential and necessary to every human being, and it’s necessary for understanding, appreciating and possibly changing our world.

“As we celebrate the 234th anniversary of our university, I look forward to seeing what we will retrieve as we look back,” she said.