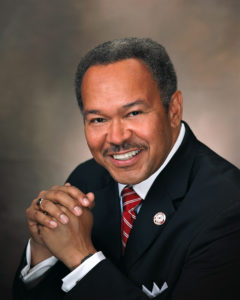 In times of moral ambiguity and deep division, we need to be able to spot the qualities of a moral leader, says Robert M. Franklin Jr.

Franklin, the James T. and Berta R. Laney Professor in Moral Leadership at Emory University, will discuss the qualities of principled leaders and how to encourage ethical civic engagement when he presents “The Vocation of Moral Leadership” at the annual Donald L. Hollowell Lecture. Open free to the public, the lecture will be held March 21 at 3 p.m. in Mahler Auditorium in the Georgia Center for Continuing Education & Hotel. This event is part of the UGA Signature Lecture series.

“These days moral leadership seems to be in short supply,” said Llewellyn J. Cornelius, the Donald L. Hollowell Distinguished Professor of Social Justice and Civil Rights Studies at the UGA School of Social Work, “but the Rev. Dr. Franklin has pointed out that it should be considered a vocation that can be carried out not just by individuals, but also by groups and institutions when they act for the common good.”

Franklin, a distinguished scholar of religion-based activism in African American communities, also is president emeritus of Morehouse College, a position he held from 2007 to 2012. He is ordained in both the American Baptist Churches USA and the Church of God in Christ.

The Donald L. Hollowell Lecture is named for the civil rights attorney who in 1961 won the landmark case that desegregated the University of Georgia.

The lecture is sponsored by the Center for Social Justice, Human and Civil Rights, the School of Social Work, the Office of Institutional Diversity, the Institute for African American Studies, the College of Family and Consumer Sciences, the religion department in the Franklin College of Arts and Sciences and the Thomas M. Parham Professorship of Family and Children Studies.