Five faculty members will be honored as Meigs Professors April 1 at the 2019 Faculty Recognition Banquet. The professorship is the university’s highest recognition for instruction at the undergraduate and graduate levels. Meigs Professors receive a permanent salary increase of $6,000 and a one-year discretionary fund of $1,000. 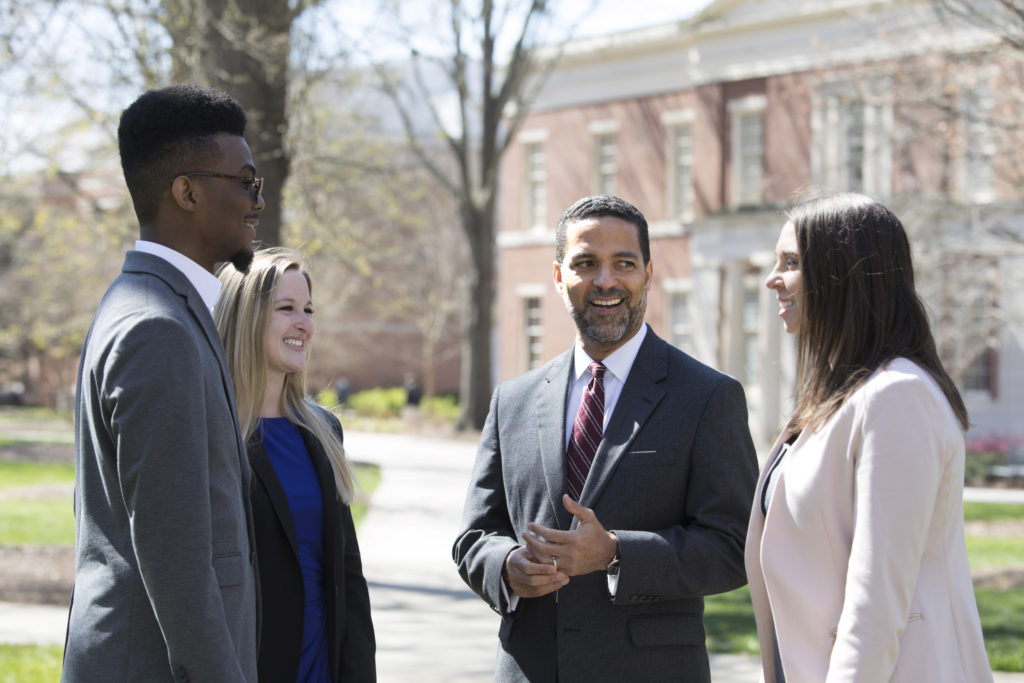 A. Gus Cleveland Distinguished Chair of Legal Ethics and Professionalism
School of Law

Lonnie T. Brown Jr. “lives by his word” and “teaches by his actions,” and by doing so is setting the bar for instruction at the School of Law.

Brown joined the law school’s faculty in the fall of 2002 and served as its associate dean for academic affairs from 2013 to 2015. Over his 16-plus-year tenure, he has enjoyed a rotating teaching load that includes “Civil Procedure,” “The Law and Ethics of Lawyering,” “Georgia Practice and Procedure” and “Ethics in Litigation.” In 2018, this portfolio of classes placed Brown among the law school faculty with the greatest student-contact teaching hours, according to School of Law Dean Peter B. “Bo” Rutledge.

Brown’s classes are educational and entertaining, but more importantly, they leave students with a strong desire to continue to acquire knowledge, according to former student and now U.S. Bankruptcy Judge Michele J. Kim.

“Each class during the semester was like an act in an award-winning Broadway play: there was a well-thought-out theme; you were presented with a legal issue that served as the plot line; there were many interesting anecdotes and witty remarks; the audience participated enthusiastically; the thought-provoking dialogue and lively banter were timed perfectly (even when totally unexpected questions or remarks were made); and sometimes there was music,” Kim said. “You could not passively sit and watch the day’s lesson. Rather, you were actively engaged in critical thinking that would eventually give rise to a deep understanding of the issues he taught, and at the end of the class you were left wanting to know more.”

This description is amplified by Brown being selected for law school teaching awards for 12 out of his 16 years on the faculty.

Brown’s prowess in the classroom also is supported and enriched by his scholarship, which focuses on legal ethics in the adversary process. He is one of the nation’s leading scholars on legal ethics, authoring numerous articles and papers, chairing major symposia in his field and authoring the book Defending the Public’s Enemy: The Life and Legacy of Ramsey Clark (forthcoming, Stanford University Press).

One of the greatest hopes of any educator is to have a profound and lasting impact on his students, and Brown undeniably is making his mark.

Looking back on his experience as a former student, Assistant U.S. Attorney Thomas Clarkson said, “[P]erhaps the greatest testament to [Brown’s] ability as an educator was his unwavering commitment to the idea that there was a ‘right’ way about conducting yourself. As someone who represents the people of the United States, there is not a single day in my professional life that I do not draw on the lesson I learned from Professor Brown. For those poor souls I supervise … I make clear on their first day that one of the few non-negotiable requirements is that they conduct themselves in accordance with the standard of conduct Professor Brown taught me long ago.” 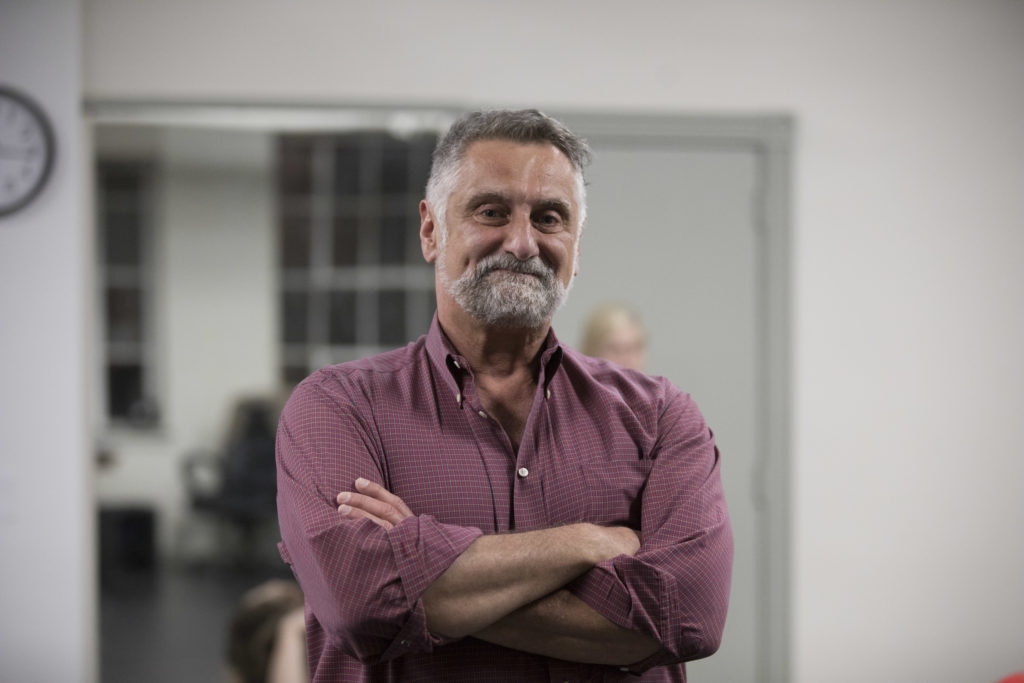 A creative inspiration to the students engaged in performance at all levels, George Contini exemplifies the scholarship of artistic training and the pursuit of excellence that sends so many on to professional careers on stage and screen.

“Whether I am working with undergrads on fundamental technique or graduates on advanced theory, I consider each student encounter a creative collaboration,” Contini said. “Blending theory into practice, I strive to be a model of the scholar/artist who engages in applied artistic research by building upon traditional performance history and techniques.

“As often as possible, I seek to involve students with my creative research as collaborators,” he added. “Throughout our shared experience, they also are learning the art of forming a detailed process, documentation and allowing for clear moments of reflection, adjustment and growth.”

He involves students in a range of applied artistic research: using archives to create original plays, developing performances based on personal narratives from marginalized communities, developing characters through historical and embodied research, community-based international collaborations and the reimagining of canonical dramatic work.

Contini enlists his specializations in acting, directing and writing in pursuit of meeting the production, academic and personal goals of burgeoning theater and film artists.

He introduces more esoteric aspects of theater and performance in ways that make them easily understandable. He created “Queer Theatre and Film,” the extremely popular split-level undergraduate/graduate course that  regularly attracts many students from other disciplines such as psychology, women’s studies, journalism and sociology.

Since 2003, Contini has served as director of the London Study Abroad Program. The program has expanded to include programming that provides students with internships at theatrical and production companies in London. He also serves as head of acting in the theatre and film studies department.

Robert Moser, associate professor of Portuguese and director of the Portuguese Flagship Program, worked with Contini as a translator and collaborator on two interdisciplinary projects.

“Contini brings the kind of fearless creativity necessary to overcome formalities and immediately engage his students on a level that was both intellectually and critically challenging, as well as deeply committed to the craft of acting and theater productions,” Moser said. 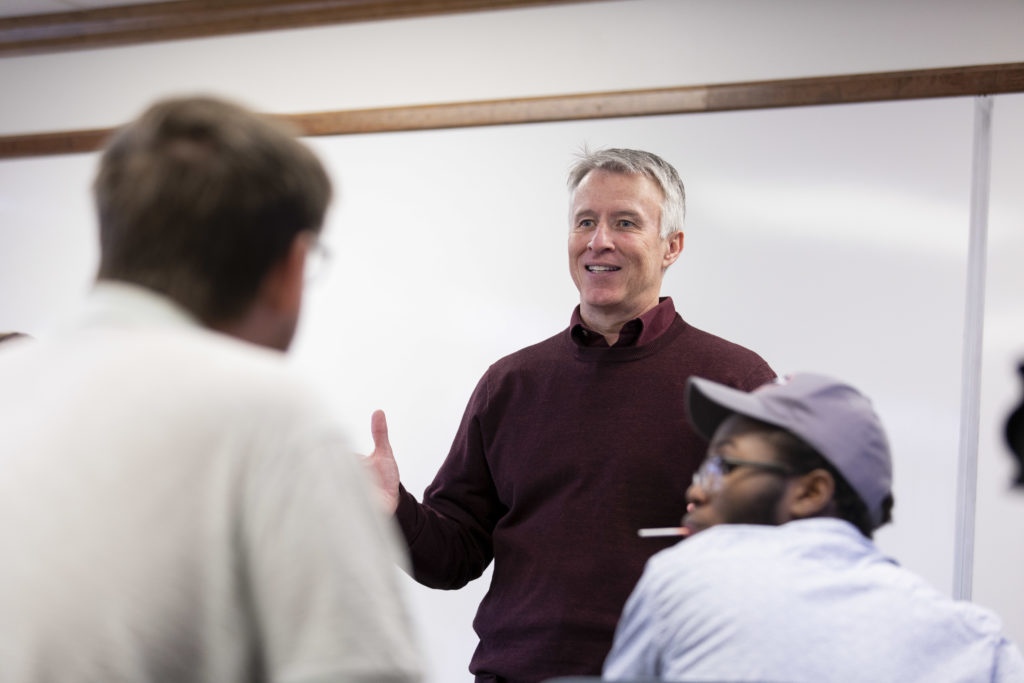 He does this by serving as a catalyst for student learning—igniting their interest in and passion for course material—rather than simply being a provider of course material.

Although Green has taught more than 25 different classes, his primary responsibilities are for several of the core classes within the Warnell School and the parks, recreation and tourism management major. For the past several years, he also has regularly taught or co-taught 10-12 classes of more than 500 students and mentored 10-12 undergraduates and 12-16 graduate students per year.

“His dedication, energy and passion to ensure student success as well as his drive for innovation in teaching is well recognized by all who have worked with him,” said Rahul Shrivastav, vice president for instruction.

Green’s undergraduate classes employ creative, fun ways to inspire learning, including the use of WALL-E to talk about sustainability and a mystery bag of prizes to encourage the asking of questions. Students also have mock snowball or beach ball fights, where they write their opinions about a topic on a piece of paper, ball it up and toss it around the room. These activities allow students to share their opinions anonymously, which leads to open discussions.

To continue to improve as an instructor, Green believes he needs to expand his teaching knowledge and skills, while finding new ways to be fresh and innovative. To achieve this, he volunteers to teach campus-wide seminars and workshops, and he mentors other faculty across campus to help them become stronger instructors.

Over time, Green’s role as teacher transforms into one of being a lifelong mentor. He stays in regular contact with many of his students. For him, people’s long-term education, growth and professional development are the best metrics of his qualities as a teacher and mentor. 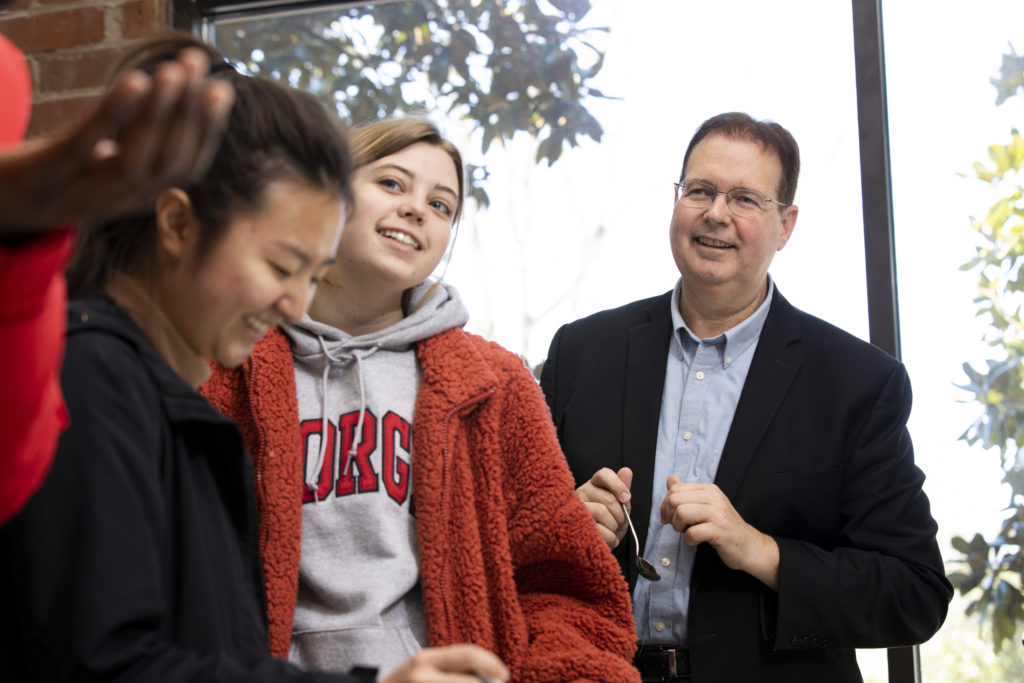 Whether food scientist Ronald Pegg is chasing coffee “from bean to cup” in Costa Rica or pinpointing the phenolic antioxidant constituents in Georgia pecans, he has a passion for inspiring an investigative spirit in his students.

“I attempt to instill in my
students the desire for lifelong learning and the realization that the knowledge base of their profession is not static, rather it is dynamic,” Pegg said. “I get no greater joy than when one of my students is conducting an experiment, and I all of a sudden see a light switch on.”

Pegg’s career has been defined by his enthusiasm toward his students and his unique teaching style. His main goal always has been to provide a balanced mix of engaging lectures and hands-on laboratory activities for his students to explore the concepts that are key to understanding the makeup of food and how its constituents can be analyzed.

Working as coach and advisor to the university’s Food Science College Bowl Team, Pegg works to mentor students while they’re in Athens, and many students still seek his advice long after they have left the university.

In recognition of his commitment, his students have voted him Outstanding Undergraduate Faculty or Graduate Faculty of the Year six times. In 2013, Pegg won the Richard B. Russell Award for Excellence in Undergraduate Teaching, becoming the first faculty member in his department to win the honor.

“For more than a decade, Dr. Pegg has been able to maintain the same enthusiasm for teaching that he had when he started at UGA,” said Josef Broder, CAES associate dean for academic affairs. “That excitement is contagious and inspires a sense of curiosity in his students that never really leaves them. His work is one reason why food science graduates from the University of Georgia are sought after by industry leaders and research institutions the world over.” 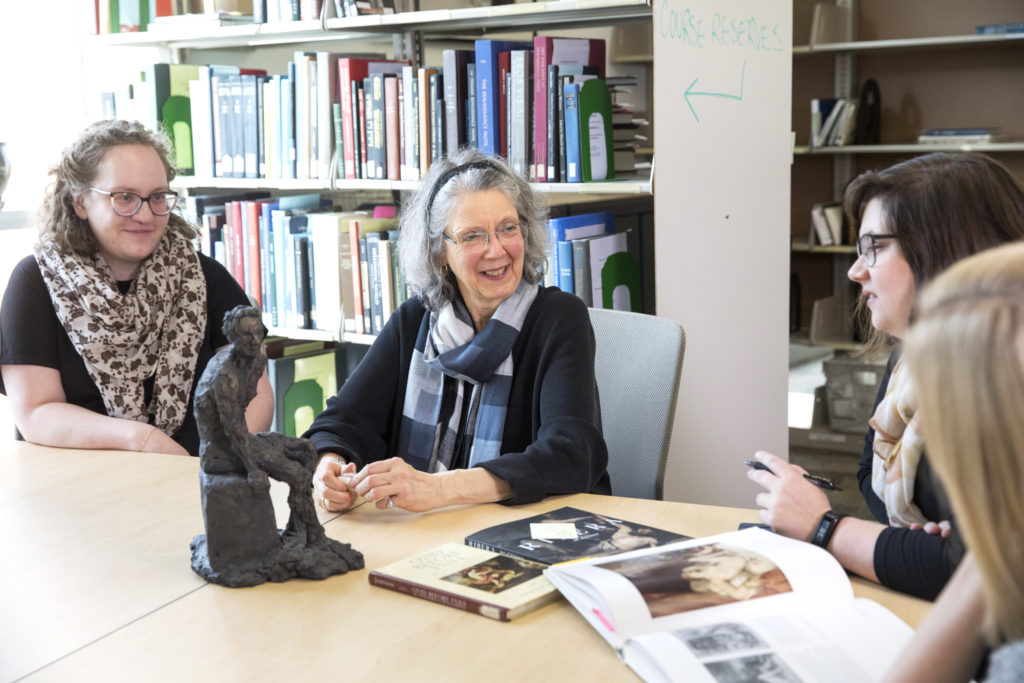 Shelley Zuraw has a knack for making Renaissance and Baroque art feel much more modern.

“My field is shifting, and I need to prepare my students, not for the Renaissance art I was trained in, but for the way it is now,” she said.

Perhaps more importantly, she makes it come alive and turns art history into “a subject that one does not rehearse, but rather lives,” said one of
her former students.

In her 27 years with UGA, Zuraw has taught more than 30 courses. She served as area chair for art history from 1998-2008 and associate director of the art school from 1998-2007. During that time, she revamped the school’s art history offerings, planned art history spaces in the school’s building and advised thousands of students.

Her accolades include the Sandy Beaver Teaching Award and Professorship and election to the UGA Teaching Academy.

Zuraw has taught 15 courses in the Writing Intensive Program and said that her commitment to the program “will remain one of the most important examples of my advocacy for teaching.”

She takes that commitment into her own classroom with “S/I’s,” or Sentences and Ideas. Each week, students submit an essay centered on the week’s material. This allows her to “see how much they are grasping of the material, work with them incrementally on their writing and guide them in structuring their own arguments.”

“Unlike the frantic memorization of information on flashcards, this approach equips students with skills necessary for more in-depth art history research by asking us to closely observe, think analytically, make connections and refine the transcription of our thoughts,” a current student said.