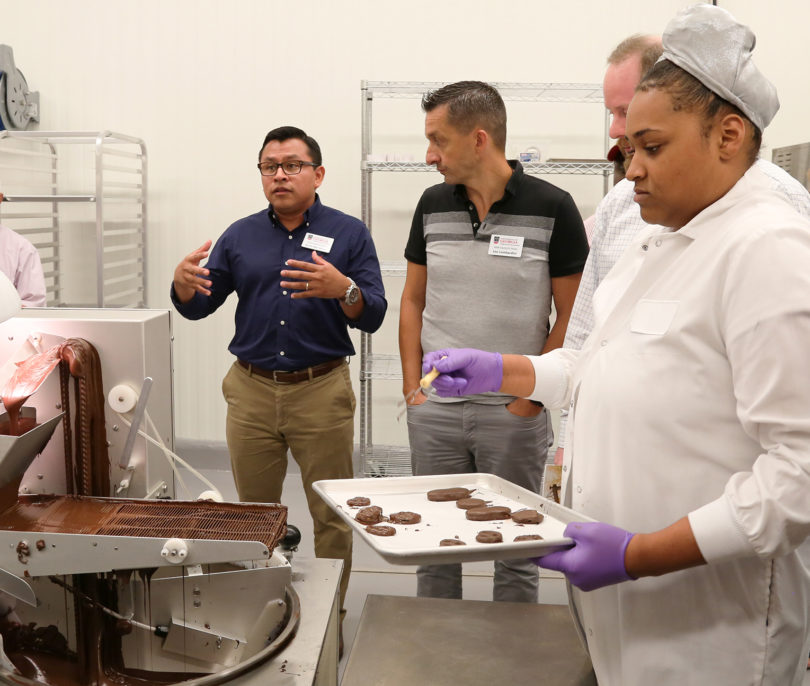 The trip ended where it began, with a large coach bus parked outside the Georgia Center in the August heat, a group of about
50 faculty, administrators and staff milling about with their luggage and backpacks.

Except, with the UGA 2019 New Faculty Tour now complete, that’s where the similarities ended. The group that boarded the bus Aug. 5 was subdued, even quiet, few of the participants familiar with each other. When they stepped off the bus on Aug. 9, there was laughter, smiling, hugs and hearty handshakes—and a lot of plans being made.

That was the impact of their five-day trek across their new home state, a whirlwind odyssey that carried the group from Athens to the mountains of North Georgia, down through Atlanta to the sandy soils of the south, east to the Atlantic coast and then back again. Five long, jam-packed days that started on the bus at 7 a.m. and ended past 9 p.m. with few breaks in between—and every minute its own reward.

“On this tour, you will recognize the historical and synergistic bond that exists between the university and the citizens of this state,” President Jere W. Morehead told the group just before they departed. “You’re going to see a lot of love for UGA. It’s deep and profound.”

The president was not exaggerating. At just about every stop along the way, the riders were greeted by waves of affection for their university—not just love but also excitement, gratitude and a whole lot of pride. Somewhere around Hawkinsville (population 4,589; located 50 miles south of Macon) it became difficult to remember just how many guest speakers had punctuated their remarks with, “By the way, I went to Georgia, too. Go, Dawgs!”

“It was a once-in-a-lifetime experience,” said Rachel Fusco, now the Georgia Athletic Association Professor in Health and Well-Being in the School of Social Work. “It was incredible to learn about the social, cultural and economic life of Georgia—a state I admittedly did not know much about. I was touched by the pride people had in their towns and how hard they are working to keep them vital.”

In fact, it is the university’s work in partnering with these communities that provided so much inspiration. Whether they were praising the efforts of the J.W. Fanning Institute for Leadership Development, the Archway Partnership or the Carl Vinson Institute of Government, or simply the steady stream of talent that emerges from UGA after each commencement, the Georgia citizens and leaders who spoke to the New Faculty Tour all expressed a deep appreciation for UGA’s devotion to its state.

In Hawkinsville, it was the Archway Partnership’s assistance in conducting a needs assessment that helped the community keep its regional hospital. In the hills of Dawson County, it was UGA Cooperative Extension and Small Business Development Center expertise that helped propel Georgia’s wine industry to an $80 million state economic impact. On the coast, it was Marine Extension and Georgia Sea Grant’s work to convince shrimpers to use turtle excluder devices in their nets that contributed to 2019’s record-breaking year for sea turtle nests.

At Pinewood Atlanta Studios, spanning 400 acres of former farmland in Fayette County, it was the UGA Grady College of Journalism and Mass Communications’ participation in the Georgia Film Academy, intended to produce more screenwriters and content producers for Georgia’s $9.5 billion film industry. And in Macon, it was the work of one of 17 UGA-operated Small Business Development Center offices, which over the past five years have helped create 1,741 new businesses and more than 13,000 jobs statewide.

“It’s unique, in my experience,” said Mattia Pistone, a new assistant professor of geology who hails from Italy, of UGA’s statewide impact. “Coming from Europe, [places like] ETH Zurich, University of Bristol, University of Lausanne, none of those universities have such deep community ties. They are very good institutions, but they don’t have much of a connection to their local or national communities.”

Some tour riders were already participating in this impact, including Jermaine Durham, a new assistant professor in the College of Family and Consumer Sciences and program director for the Georgia Initiative for Community Housing. Previously he’d worked for the Housing Authority of Savannah, and on Aug. 9, Durham received a warm greeting from Malik Watson, public service associate for the Vinson Institute in Savannah, with whom he’d worked on housing projects.

The new faculty also used their time together on the bus to discuss ways to enhance UGA’s research enterprise and strengthen its global reputation.

The university’s widespread state involvement was not lost on the 2019 tour’s most notable participant, Senior Vice President for Academic Affairs and Provost S. Jack Hu, who participated  in the entire tour alongside his new faculty colleagues.

“Being a land-grant and sea-grant university, we need the state as much as the state needs us—we are tied together,” Hu said to his fellow tour participants during a reception with alumni in Atlanta. “Our outreach and service activities are everywhere in this state, and that is truly an exemplar compared with all the public universities I know of. Many of you also come from public universities, and you’ll see that UGA truly is an exemplar.”

By tour’s end, what had begun as a group of strangers was transformed into something more. Many of the riders had connected on Facebook and were busy posting photos and engaging with each other online. There was a dedicated Slack group, an elected “class president” (Dee Warmath, assistant professor in the College of Family and Consumer Sciences) and a pledge from the provost to hold a reunion.