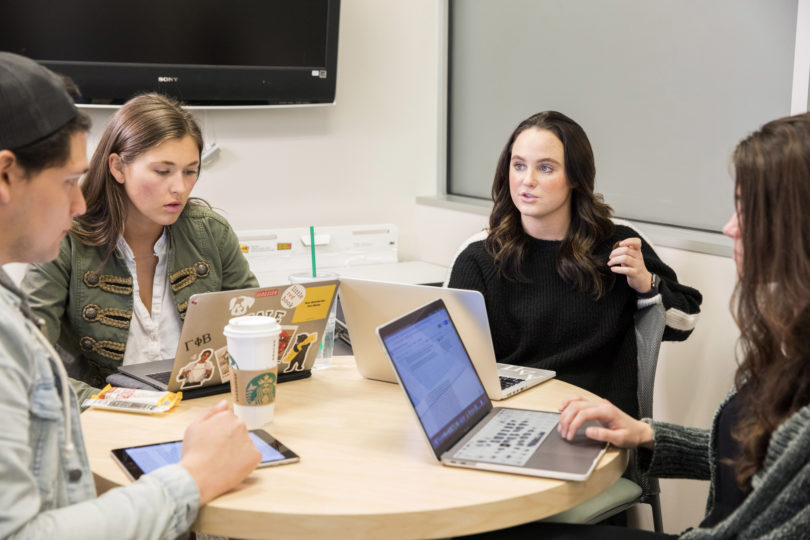 From left, Daniel Copetillo, Grace Bedsole, Cat Hendrick and Dakota Werner work on Hendrick’s talk at TEDxUGA: Amplify, which will be held March 22 at 7 p.m. at the Classic Center. (Photo credit: Dorothy Kozlowski)

In Cat Hendrick’s family, they’re known as “Cat stories.” On March 22, she’ll take the stage to share one of those personal stories with a much wider audience as one of three student presenters at TEDxUGA 2019: Amplify.

“You only get one chance, and I want to do it right,” she said. “I’m excited to hear people’s reactions … and whether they’ve learned something that hopefully will change their lives for the better. I think that moment is going to be really, really neat.”

Hendrick, along with A.C. Williams and Jitendra Pant, were the only three students selected  for TEDxUGA 2019: Amplify.  In November, they shared their ideas at the Student Idea Showcase, a TED-like event that spotlights student ideas and acts as the annual student-selection platform for TEDxUGA. After 11 presenters took the SIS stage, the TEDxUGA steering committee chose these three to round out the 2019 presenter lineup. Since then, Hendrick, Williams and Pant been working with a group of fellow students—their Presenter Prep Team—to perfect their talks.

“Having the voice of students who are attending the university at TEDxUGA is important to representing the entire spectrum of knowledge here,” said Kendall Lake, TEDxUGA curator who is pursuing her bachelor’s degree in journalism with a combined master’s degree in emerging media.

Megan Ward, administrative director of the New Media Institute and TEDxUGA licensee, said that students bring a natural excitement to the event.

The goal for the PPT is clear: to help each presenter craft a polished TED talk focused around a single “idea worth spreading” and that reflects the presenter and university.

“It’s really important for me to work with them so that it’s not just a good story—it’s an efficient talk,” Hendrick said. “There’s never going to be day in your life when it’s not important to get an idea across efficiently, eloquently and emotionally. It’s perfecting the art of communication.”

Each PPT consists of a combination of rookies and veterans, classified based on whether they’re currently taking NMIX 4200: New Media & TED for the first or second time. In the class, they learn how TED Talks differ from all other presentation styles and the steps and tools to create an effective TED Talk. After a series of assignments proving they understand the concepts, they’re assigned a presenter. Together, they spend months working through the curation process—everything from generating a big idea to establishing a connection with the audience to developing their messages.

Hendrick, a third-year undergraduate majoring in journalism with a certificate in sports media, will talk about imposter syndrome, commonly understood as a false and sometimes crippling belief that one’s successes are the product of luck or fraud rather than skill. It’s something she experienced while covering the 2018 Winter Olympics in South Korea for TeamUSA.org, and she’s working with her PPT to take her personal experience and harness an idea that can be shared on the TEDxUGA stage.

“I wanted to find an idea that is unique and that no one could talk about the way I could,” she said.

Hendrick regularly meets with her team—Grace Bedsole, Dakota Werner and Daniel Copetillo—to work on drafts of her talk, decide on visuals and practice her delivery.

“It’s not necessarily about taking stuff out—it’s about adding things to the talk to make it more widely relatable,” Hendrick added.

Williams, whose talk focuses on video gaming communities, also used his PPT sessions as a time for brainstorming.

“Not only does my PPT help me better form my ideas,” he said, “but they also are so vital at bringing new ideas and angles to the table.”

But the skills the PPT are sharing and the student presenters are refining aren’t just for the TEDxUGA stage. They’re skills that can be used for years to come. This hands-on collaborative process allows the PPT to gain mentorship and leadership experience and allows the presenters to embrace a curation format they can use when preparing for future public speaking opportunities.

In the end, Hendrick hopes that her talk sparks a discussion.

“It feels good to know that the tough times I went through were worth it,” she said. “I hope what people get from my talk is that they’re not alone and start a conversation.”

Pant, whose talk focuses on the benefits of nitric oxide use in the biomedical industry, said he’s already seeing the benefits from his TEDxUGA experience.

“I have been doing public speaking for the last four years, but TEDxUGA will give me unmatched recognition,” he said. “But more than public speaking, it has helped me to really go back and see my own research from a different angle. It has helped me break down my research into simple terms that are easily understood. In short, it has increased my scientific reach.”

According to Williams, everyone has an idea worth spreading.

“It’s easy to get caught up in your own stories and specialties, but life is always more exciting if you can share in other people’s passions,” he said.

The event, now in its seventh year, will be held at the Classic Center Theatre. Students may register for $15, and faculty and staff may register for $20. There is no audience for the event—only participants. For this reason, it is required that all individuals plan to attend the entire event, which will run from 7-10 p.m. For more information and a full list of presenters, visit TEDxUGA.com.