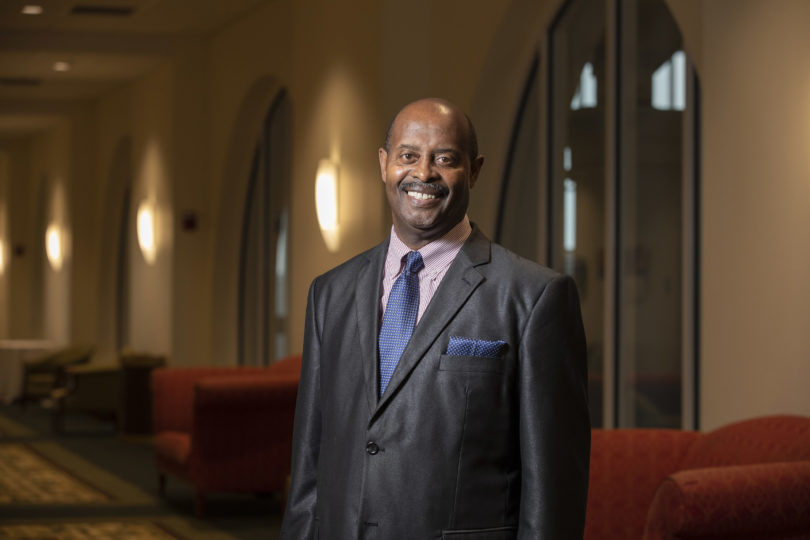 Marvin J. Nunnally Jr. has had mentors since the fifth grade. Many of the notable Athens-area figures—Howard B. Stroud, Lawrence Milton Scotland, his cousin the Rev. David Nunnally Sr. and Vinnie Williams—helped push him to focus on bettering himself through education.

“There weren’t that many opportunities coming from Oconee County,” said Nunnally, a Watkinsville native. “I worked very hard, but I was fortunate to have the influential foundation that propelled me to where I am today. Those teachers, the counselors and all those people helped me stay hungry for education.”

Now, decades later, Nunnally is doing the same for a younger generation of students. His efforts mentoring and propelling local youth recently earned him the 2020 President’s Fulfilling the Dream Award, presented at the Martin Luther King Jr. Freedom Breakfast on Jan. 17. The award recognizes those in the UGA and Athens-Clarke County communities who have worked to make King’s dream of equality and justice a reality.

“I think that I was lucky that others took time to pull me aside and say they saw something in me,” Nunnally said. “I think that’s what’s missing in a lot of people’s lives, so that’s what I try to do.”

“I challenge them and push them hard,” Nunnally said. “But then those kids go on to be Merit Scholars, Zell Miller Scholars, even Bill Gates Millennium Scholars. The things we’ve been able to watch them accomplish has just been amazing.”

Over the seven years, youth academy participants have gone on to study at Howard, Emory, Stanford and Harvard universities and Agnes Scott College. Many of the students received scholarships from a variety of areas thanks to Nunnally.

“The best part about the academy is that it’s laying a foundation for the kids to dream,” he said. “We start by just encouraging them to dream. We’ll figure the road they need to travel to get to that dream, but they just have to start.”

Nunnally came up with the idea for the youth academy more than a decade ago but left the proposal for it sitting on a shelf for three years because he didn’t have the means to make it happen. But after a meeting with Cheryl Dozier, former associate provost and chief diversity officer at UGA, he was able to propose the program as a community piece in a grant, and things took off from there.

“I believe that education is the equalizer,” Nunnally said. “Once you get that education and you continue to grow, you can’t stop. That’s why I push the kids so hard to go for it.”

As the first in his family to go to college—he earned a Bachelor of Applied Science degree in political science and government in 1982 from UGA—Nunnally also helps students succeed in other ways. He’s helped raise more than $2 million in scholarships through the Athens Area Human Relations Council, the Masonic Order and the Kappa Alpha Psi fraternity.

“When I joined the fraternity, we took an oath, which I take it very, very seriously, to help promote the community,” Nunnally said. “It is rewarding for me to see these young people excel and take advantage of all the opportunities that we weren’t exposed to.”

But Nunnally is quick to give credit to others. He says that he’s just tapping into his network and putting out the call for help; others are helping create the foundation for student successes alongside him.

“The amazing thing is that we get the community to believe in the future of the students, too,” he said. “They sponsor the scholarships. We don’t mind getting out there and hustling to get the scholarships, but they’re the ones giving.”