Five faculty members were named Josiah Meigs Distinguished Professors for 2021. The professorship is the university’s highest recognition for instruction at the undergraduate and graduate levels. Meigs Professors receive a permanent salary increase of $6,000 and a one-year discretionary fund of $1,000. 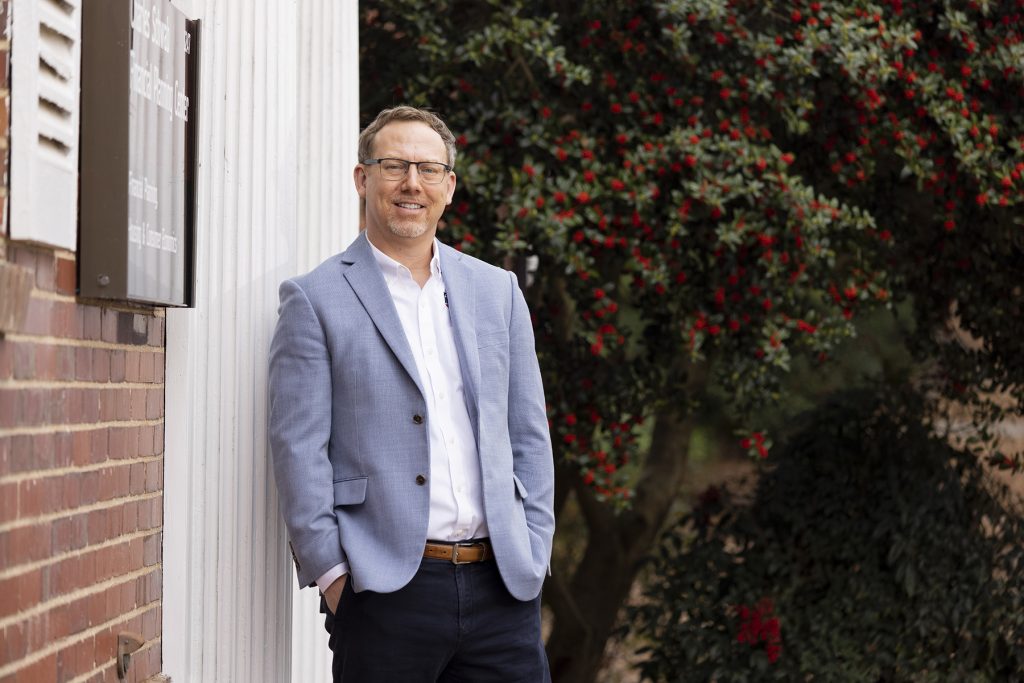 Joseph Goetz is a professor of financial planning in the College of Family and Consumer Sciences. (Photo by Andrew Davis Tucker/UGA)

Not every professor has co-founded a clinic, a center, a company and an entirely new field of study, but Joseph Goetz has.

Goetz began at the University of Georgia in 2006, and since then, he has curated the financial planning program into one of the top three programs in the United States. He’s also a co-founder of financial therapy—an entirely new field of study that’s now utilized both at UGA and around the globe.

“For the past 15 years, he has created, developed and implemented innovative clinics, centers, programs, courses and internship sites unlike any other professor on campus—all to enhance students’ learning,” wrote an associate dean.

Goetz has taught 10 varying courses, as well as a First-Year Odyssey course, and his average teaching evaluation score is consistently well above the department average. He also spends hundreds of hours outside the classroom, offering one-on-one mentoring to students and regularly serves on doctoral committees for students of other disciplines.

“Dr. Goetz has played a pivotal role in my journey as a doctoral student,” one former student wrote. “His thought-provoking and compassionate teaching style has challenged me to think critically about course concepts and to consider the ethical implications of my future work. As the chair of my doctoral committee, Dr. Goetz has empowered academic, research and professional successes, and coached me through the inherent challenges of pursuing an advanced degree.”

As a result of his teaching, Goetz has won a plethora of awards, the most recent of which include the Bill and June Flatt Outstanding College Teacher of the Year and the Creative Teaching Award, both in 2019.

“I can think of no other professor more deserving of the Meigs Professorship,” a colleague wrote. 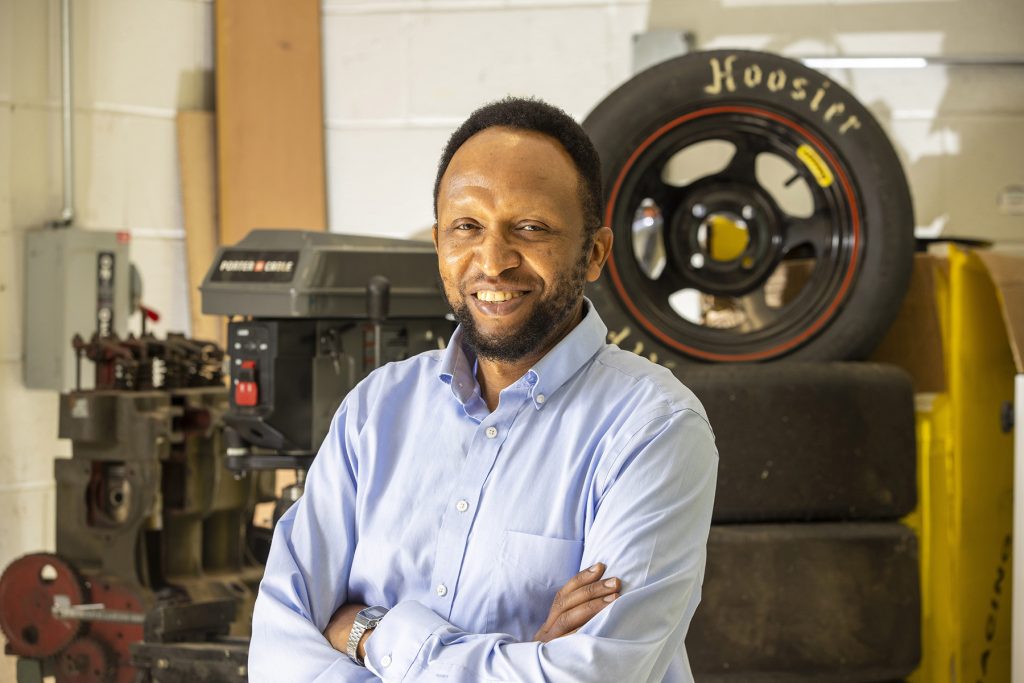 John Mativo is an associate professor of career and information studies in the Mary Frances Early College of Education. (Photo by Dorothy Kozlowski/UGA)

Mativo’s assigned time is 40% teaching, 40% research and 20% service. He teaches four courses during the year, as well as summer courses and a First-Year Odyssey course. In addition, Mativo also has volunteered to carry extra teaching loads, just to help students graduate on time.

Since 2007, Mativo has leveraged his expertise in both education and engineering for the success of students.

“Dr. Mativo cultivates one of the most cheerful and uplifting classroom environments I have had the pleasure of learning in,” one former student wrote. “No matter how frustrating our material, Dr. Mativo led us through it confidently, encouragingly and with a contagious smile. He started every Monday class asking us how our weekends were and if we’d had time to spend enjoying the outdoors.”

“One of Dr. Mativo’s greatest contributions has been his commitment to experiential learning. This is observed best through his high level of involvement in establishing and leading the UGA Student Branch of the Society of Automotive Engineers,” wrote an assistant dean. “I have witnessed him being the primary individual in securing the necessary funds—more than $57,000—to support the student chapter.”

Mativo is also a member of both the Research and Innovation in Learning, and the Engineering Education Transformation Institute, and as such, uses his experience to enhance learning for both graduate and undergraduate students.

“Dr. Mativo works to ensure that UGA students develop good habits of the mind so that they continually search for ways to improve their own learning. His teaching motivates students to be creative and persistent by making his teaching relevant to real-world applications,” wrote a department chair.

He has also received a plethora of awards and recognitions, two of the most recent being the SAE Outstanding Faculty Advisors Program International Award and the Richard B. Russell Excellence for Undergraduate Teaching Award. Mativo’s accolades come as no surprise when students, faculty and colleagues praise him and his teaching so highly.

“He looks for the long-term learning effects of his instruction. His lessons are challenging and focused. He consistently offers opportunities for students to apply classroom material to real-life situations, hence ensuring access to current information,” a colleague wrote. 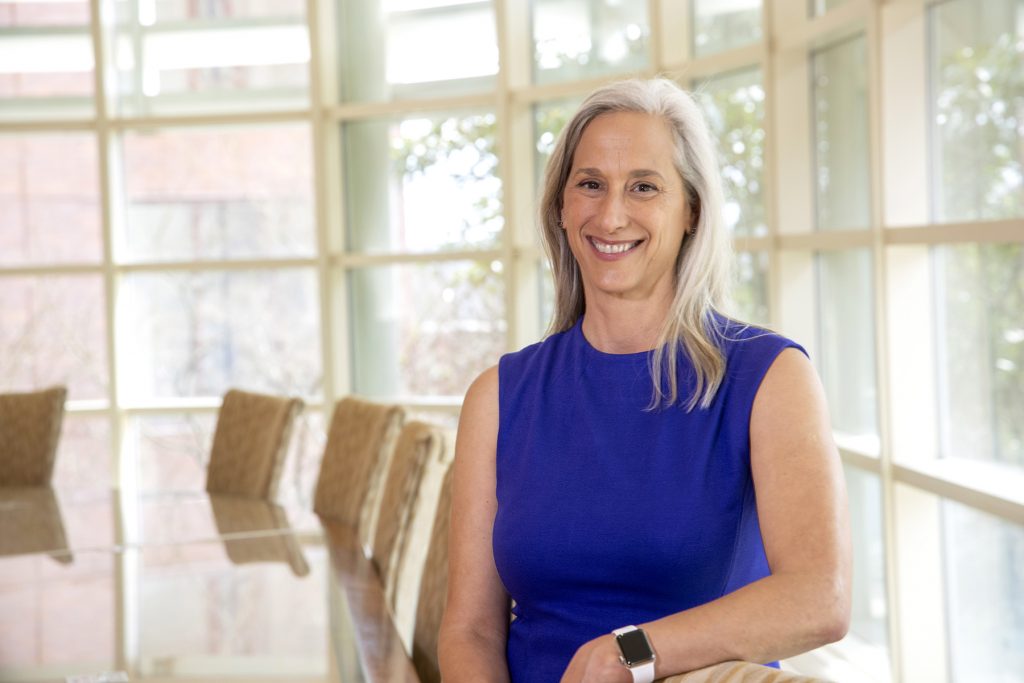 Lori Ringhand is the J. Alton Hosch Professor of Law in the School of Law. (Photo by Dorothy Kozlowski/UGA)

Lori Ringhand isn’t just a leader in the law school. She’s also a leader within the profession of law as a whole—especially with regard to educating both her students and U.S. citizens about democracy, the Constitution and the Supreme Court.

Ringhand began at the University of Georgia in 2008. In both 2010 and 2015, she earned the law school’s highest teaching honor, the C. Ronald Ellington Award for Excellence in Teaching. In 2017, Ringhand received the John C. O’Byrne Memorial Faculty Award for Furthering Student-Faculty Relations. Her most recent honors include being awarded a Stanton Foundation course development grant for 2020-2021 and being named a Fulbright Distinguished Chair in spring 2019.

“One of the greatest hopes of any educator is to have a profound and lasting impact on students. Lori undeniably has,” a dean wrote.

“Professor Ringhand provides students with an incredible model to aspire to, especially for female-identifying students. Women entering the legal profession are often sent conflicting messages about who they should be,” one former student wrote. “Professor Ringhand is the role model that I and many students need to validate our hopes about our own future identities.”

Ringhand’s professional activities—such as her current work as the interim director of the Dean Rusk International Law Center and her numerous professional publications—exemplify her dedication to the field and to UGA. She’s nationally recognized as a Supreme Court scholar and from 2015-2018 served as the law school’s associate dean for academic affairs. She also served as a UGA Provost’s Women Leadership Fellow from 2016-2017. 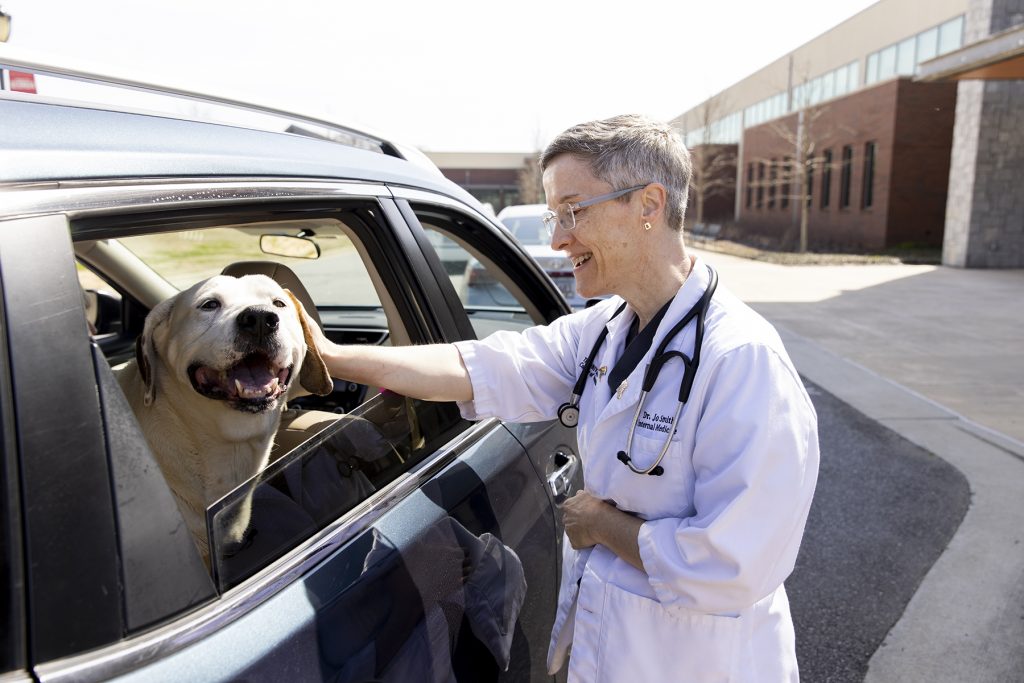 Jo Smith is an associate professor of small animal internal medicine in the College of Veterinary Medicine. (Photo by Andrew Davis Tucker/UGA)

It’s fair to say that teaching takes up most of Jo Smith’s professional life.

Smith was hired in 2009, and since then has created and managed five didactic courses, coordinated two additional courses and taught in another 12 classes. Her current didactic teaching load is made up of 23.5 hours of lectures and 16 hours of labs. As her teaching expertise has developed, she has been a source of didactic pedagogic training to other faculty in the College of Veterinary Medicine and veterinary specialists and provides 21 weeks of clinical teaching per year to D.V.M. students, among others.

“Dr. Smith’s excellence is not by accident; it is intentional, it is purposeful, and it is her habit over many years. She is among the most—if not the most—consistently dedicated teachers that I have seen,” one of her colleagues wrote. “To teach is to give, and she is our best giver.”

Since 2015, Smith has served as the Small Animal Internal Medicine (SAIM) Residency program director, which lays the foundation for residents to take a certification exam. The number of residents has doubled during her tenure. She also developed a specialty SAIM internship that aims to boost SAIM Service’s capacity to see patients.

Although Smith is certainly a leader and educator of the field, she’s also an official and unofficial mentor to many students. She’s a faculty advisor for Broad Spectrum, a student extension of the Lesbian and Gay Veterinary Medical Association, and a contributing
member of the Bulldawg Support Network.

“Dr. Smith helped to focus our college’s faculty and administration on the importance of wellness for our students and practicing veterinarians,” wrote one of Smith’s colleagues.

Smith was also awarded the Zoetis Distinguished Teaching Award in 2018 for her dedication and outstanding achievement in the field. In 2019, she received the David Tyler Award for Advances in Teaching. 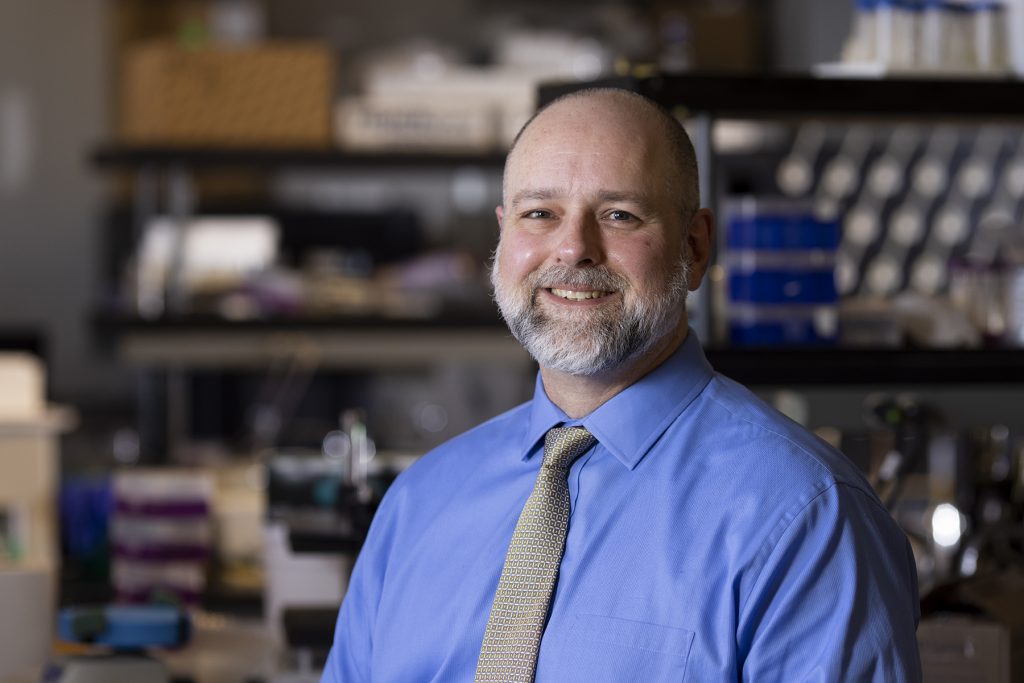 Zachary Wood is a professor of biochemistry and molecular biology in the Franklin College of Arts and Sciences. (Photo by Andrew Davis Tucker/UGA)

Zachary A. Wood
Professor
Department of Biochemistry and Molecular Biology
Franklin College of Arts and Sciences

During his time at UGA, he’s trained and mentored undergraduates through his Scientific Reading and Analysis class and has brought new teaching tools into his introductory biochemistry courses. He also created a First-Year Odyssey course in 2012 to introduce freshmen to careers in scientific research.

In addition to teaching, Wood maintains a leading research lab where he studies protein structure with a team composed of graduate and undergraduate students. He is committed to experiential learning, and since coming to UGA, a majority of his peer-reviewed publications include undergraduates as co-authors.

“Dr. Wood’s research expertise is in protein structure and function, and he prides himself on reducing the complexity of the subject to an interesting and digestible level,” a colleague said. “He is so dedicated to optimal delivery that he attends all of the classes of his co-teachers, and we jointly review afterwards our effectiveness and connections between the subsections. This is an uncommon effort but pays off for reinforcing content and keeping consistency for the students.”

Wood has received many awards over the past years, some of the most recent including the Richard B. Russell Excellence in Undergraduate Teaching Award in 2016 and the Outstanding Professor Award in 2014, recognized by the Student Government Association.

“He engages his students during lectures, which helps us to understand and remember concepts,” a former student wrote. “He didn’t just stand behind his computer or the podium to talk. He walked around the front of the room, used his arms to show how molecules interacted and connected processes that we were learning to things we could understand.”

Other professors in the biochemistry and molecular biology department concur that Wood’s instruction skills not only stand out but also transform the ways in which students learn material. One colleague points out that Wood’s energy and excitement is admirable.

“I am truly fortunate to have a colleague that shares that infectious energy,” a colleague wrote. “More importantly, the students become interested in such a manner that they are extremely motivated to take a real stake in the learning process. In essence, they become more than just curious; they become vested on their own behalf.”