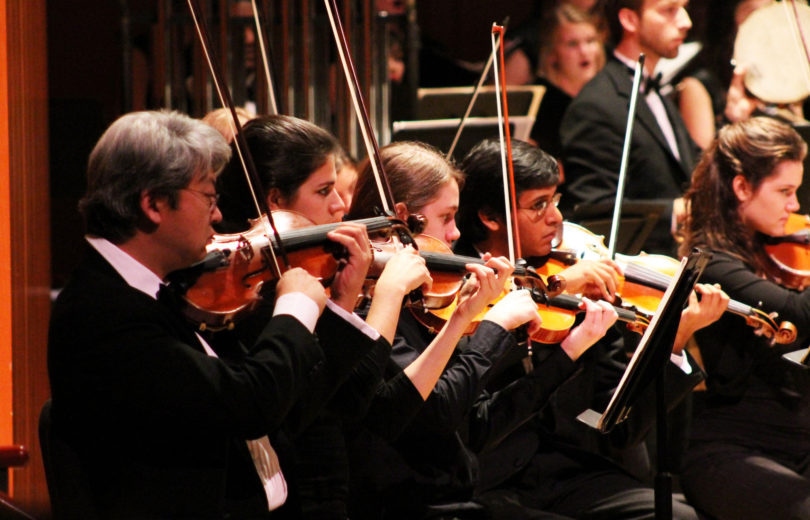 Pianist Damon Denton will appear as featured soloist with the UGA Symphony Orchestra on Sept. 11 in Hodgson Concert Hall.

The performance, which opens the 2014-2015 Hugh Hodgson School of Music’s 2nd Thursday Scholarship Concert Series, will be the first to feature the new 7:30 p.m. start time for the series. The UGA Symphony Orchestra will be directed by Mark Cedel.

In addition to Beethoven’s Symphony No. 3 in E-flat major Eroica, the UGA Symphony Orchestra will showcase Denton during its performance of George Gershwin’s Concerto in F.

“One of the reasons I love this composition is because it highlights the piano and orchestra in equal measure,” said Denton, faculty accompanist at the Hodgson School. “It gives the entire orchestra-not just the piano, but all the wonderful musicians onstage-a chance to shine.”

As one of the country’s most celebrated composers, Gershwin had an affinity for combining distinctly American idioms, including jazz, the blues and ragtime, into his compositions. Concerto in F, while more closely tied to classical concerto tradition than Rhapsody in Blue, nonetheless incorporates many of the sounds, textures and harmonies for which Gershwin is known.

A native of Charleston, South Carolina, Denton graduated from Johns Hopkins University’s Peabody Institute and completed his postgraduate work at The Juilliard School of Music. Denton has performed in recital with members of the New York, Los Angeles, Boston, Philadelphia, Dallas, San Francisco and Atlanta symphony orchestras, as well as musicians of the Orchestra of St. Luke’s, the Orpheus Chamber Ensemble and New York’s “Winds of New Amsterdam.”

More information on the 2nd Thursday Series or the Hodgson School of Music is at music.uga.edu.