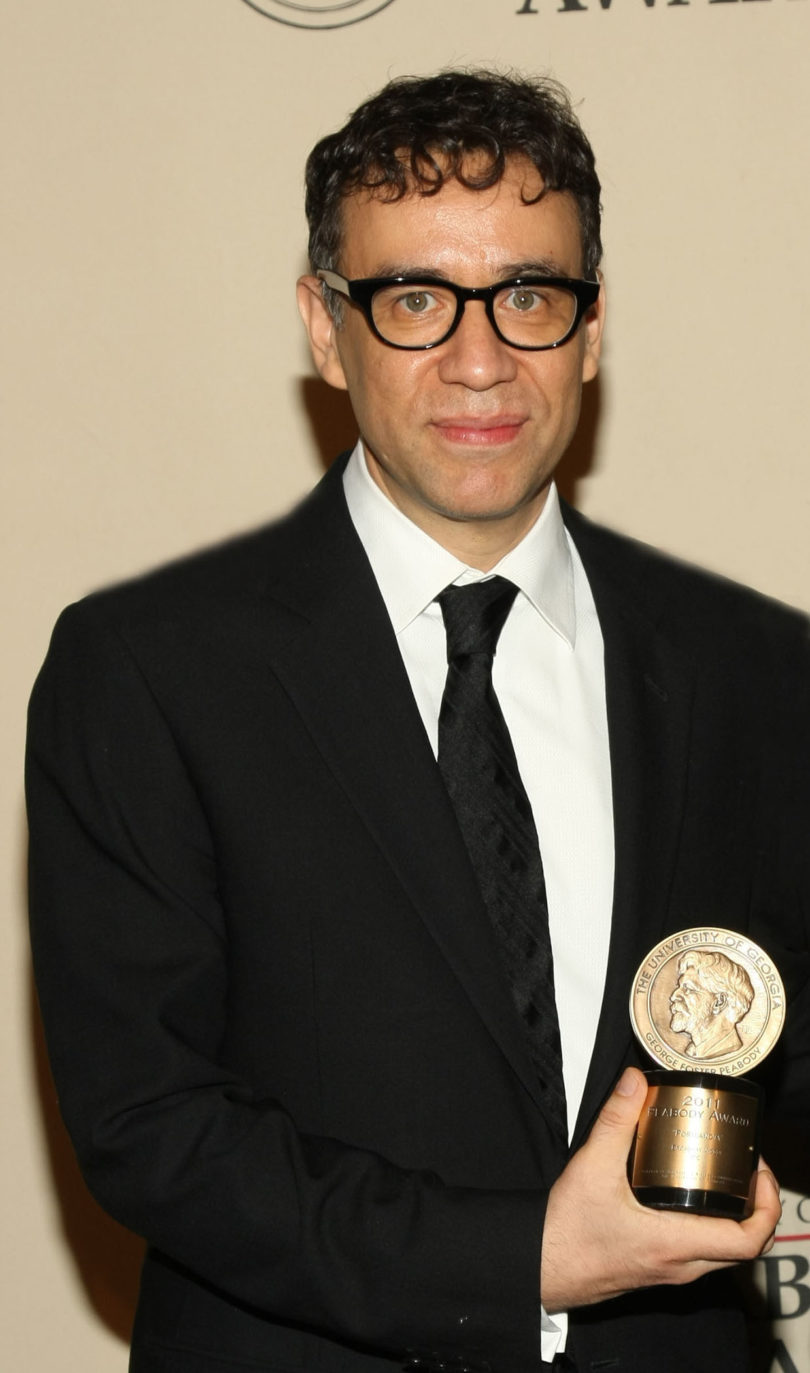 Fred Armisen to host May 31 gala at Cipriani Wall Street

Athens, Ga. – For the first time in its 73-year history, the University of Georgia’s Peabody Awards-the official presentation of the oldest and most prestigious award for electronic media-will be held as an evening gala event.

The May 31 ceremony in New York will have a new venue: the Greek revival special-events palace Cipriani Wall Street. For the first time, the ceremony will be a Sunday night event, complete with red carpet, rather than a workday luncheon.

Actor-producer-writer Fred Armisen, co-creator, co-writer and co-star of the Peabody-winning and Emmy-nominated “Portlandia,” and an 11-season Saturday Night Live veteran, will emcee the reimagined event. The Peabody Awards and Pivot television network collaborated to create an event with TV foremost in mind. In June, Pivot will air the 90-minute prime-time special that combines the best of the ceremony, with interviews and clips of winning programs. The ceremony and primetime special are being produced by Den of Thieves.

“We are thrilled to have Fred Armisen lead the Peabodys into a new venue and a new era,” said Jeffrey P. Jones, director of the Peabody Awards program at UGA. “Armisen is not just a comedian but an inspired citizen whose singular take on life and politics exemplifies the Peabody mission to honor stories that matter.”

Armisen and Jones will welcome 1,000 industry professionals, including the 2014 Peabody winners, to celebrate excellence in electronic media.

This February, Armisen co-hosted IFC’s Film Independent Spirit Awards. In February 2014, he was named bandleader of the 8G Band on “Late Night with Seth Meyers.” The band, curated by Armisen, includes members of indie rock bands Les Savy Fav and Girls Against Boys.

His most recent venture is his new IFC comedy, “Documentary Now!” The show is a curated series of half-hour documentaries and biopics, each about a completely fictitious subject. Produced by Lorne Michaels’ Broadway Video Television and directed by “SNL’s” Rhys Thomas, IFC has ordered six half-hour episodes to premiere in 2015. Meyers will be executive producer on the series along with Armisen and Bill Hader, who will have recurring roles. Armisen will also soon begin production on the film “Geezer,” which is written and directed by Lee Kirk. The film is a punk rock mid-life crisis story with Armisen starring alongside Billie Joe Armstrong, Judy Greer and Selma Blair.

Armisen has engaged audiences with memorable impressions and characters including world leaders like President Barack Obama (he was also part of the “SNL” team that won a 2008 Peabody for its satirical election coverage that year) and Iranian President Mahmoud Ahmadinejad in the popular digital short “Iran So Far Away” to “Weekend Update” fixtures like political comedian Nicholas Fehn or half of the songwriting team of Garth and Kat (with Kristen Wiig) to name a few.

Armisen has landed on Rolling Stone’s “Hot List” and has several times on Entertainment Weekly’s “Must List.” He has appeared in countless feature films including “Easy A,” “The Rocker,” “Confessions of a Shopaholic,” “Eurotrip” and “The Promotion” as well as lending his voice to the feature “The Smurfs.” He has also appeared in the films “Tenacious D in The Pick of Destiny” with Jack Black, “Baby Mama” with Tina Fey and Amy Poehler, “The Ex” with Zach Braff and Jason Bateman, and in Will Ferrell and Adam McKay’s “Anchorman: The Legend of Ron Burgundy.”

The Peabody Award recipients for the calendar year 2014 will be announced over a two-week period beginning April 14, with the Individual/Institutional winners. Entertainment winners will be announced live on ABC’s “Good Morning America” on April 16.

“Announcing our entertainment winners on ‘GMA’ is an important milestone for the Peabodys,” Jones said. “Our goal is to invigorate and inspire citizens through the transformative power of television and electronic media to tell stories that transform and inspire us in our everyday lives. Reaching the large, diverse ‘GMA’ audience helps us accomplish that goal.”

Pivot (http://www.Pivot.tv) is a television network from Participant Media with a diverse slate of original series, acquired programming, films and documentaries. Pivot focuses on entertainment that sparks conversation, inspires change and illuminates issues through engaging content and, through its website TakePart.com, connects audiences to a wealth of content and customizable actions. Pivot is available in over 47 million homes nationally via major television providers and offers subscribers a live and on-demand streaming option via its interactive, downloadable Pivot app.

Participant Media (http://www.ParticipantMedia.com) is a global entertainment company founded in 2004 by Jeff Skoll to focus on feature film, television, publishing and digital content that inspires social change. Through its films, social action campaigns, digital network and its television network, Participant seeks to entertain, encourage and empower every individual to take action.

The Peabodys, based at UGA’s Grady College of Journalism and Mass Communication, are the oldest in electronic media and among the world’s most prestigious and selective prizes. They recognize excellence and meritorious work by radio and television stations, networks, webcasters, podcasters, producing organizations and individuals. The 18-member Peabody Board is a distinguished panel of television critics, industry practitioners and experts in culture and the arts. Selection is made by the board following review by special screening committees of media scholars at UGA and other universities around the country. For more information regarding the Peabody Awards program, please visit www.peabodyawards.com or follow @PeabodyAwards on Twitter.

Established in 1915, the UGA Grady College of Journalism and Mass Communication offers undergraduate majors in journalism, advertising, public relations, digital and broadcast journalism and mass media arts. The college offers several graduate degrees and is home to the Peabody Awards, internationally recognized as one of the most prestigious prizes for excellence in electronic media. For more information, see www.grady.uga.edu or follow @UGAGrady on Twitter.