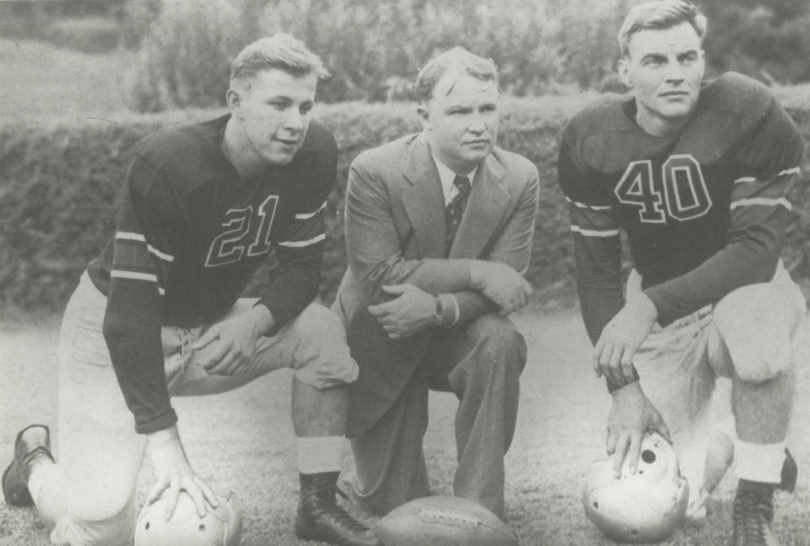 The Rose Bowl was a morale boost that year for a university population watching war threats overseas.

“UGA football has a tremendous and really immeasurable significance to the Sinkwich family. I think I can speak for all of us when I say that there really aren’t any words that can describe just how great it is to have another Sinkwich not only at UGA, but also on a UGA football team — a team that just won the SEC championship and is heading back to the Rose Bowl for the first time since my grandfather was there 75 years earlier,” said Frank Sinkwich III, grandson of Frank Sinkwich and father of Frank Sinkwich IV. “The only words I can muster are that it just seems meant to be.”

V is for victory

The 1942 football team posted an 11-1 record — its only loss to Auburn, like the 2017 team — and became the SEC champions. There were not many bowl games at that time, so few teams had the opportunity to play in the post-season.

“Even getting invited to a bowl game was a big deal, but certainly going to the Rose Bowl, which was the oldest bowl game, was an especially prestigious honor,” said Jason Hasty, UGA athletics history specialist with the Hargrett Rare Book and Manuscript Library.

This opportunity provided a morale boost for a university population that still seemed optimistic, despite World War II threatening overseas. Students were doing their part for Uncle Sam through scrap drives and other efforts, and the Rose Bowl returned to Pasadena. The 1942 Rose Bowl had been moved to North Carolina after the attack on Pearl Harbor.

“I think it was a morale boost,” Hasty said. “It’s just like today — everyone associated with the university is excited about the team doing well.”

One of the highlights of the team’s trip to California was a visit to Paramount Studios and a chance to meet with some Hollywood stars. (Courtesy of Hargrett Rare Book and Manuscript Library/University of Georgia Libraries)

The team traveled to California by train and took time to see some of the sights in Los Angeles. One of the highlights was a tour of Paramount Studios, where team members got to meet stars such as Rita Hayworth, Fred Astaire, Ginger Rogers, Bob Hope and Spencer Tracy.

There was no Tournament of Roses Parade, but U.S. military stationed in Australia were able to hear the game on radio. UGA shut out UCLA 9-0 before a capacity crowd of 93,000 and ended up being ranked first in the majority of the polls used to decide the national champions at the time. Frank Sinkwich scored the team’s only touchdown, despite playing with two sprained ankles.

Frank Sinkwich’s efforts also were recognized with the 1942 Heisman Trophy — UGA and the Southeastern Conference’s first. Sinkwich would go on to serve in the U.S. Marine Corps, the U.S. Merchant Marines and the U.S. Army Air Force. In fact, he accepted the trophy in his Dress Blue uniform, according to Frank Sinkwich III. After his military service, Sinkwich went on to play with the Detroit Lions for two years, winning the Joe F. Carr Trophy, the first award in the NFL to recognize a most valuable player.

Sinkwich was born in Croatia and grew up in Youngstown, Ohio. While UGA recruiters were in Youngstown to look at other players, a gas station attendant told them to watch Sinkwich play. He was offered a spot but refused to come to UGA unless his good friend George Poschner also was given a spot. Sinkwich didn’t budge, and both men joined the team. Sinkwich graduated with a degree in education in 1943.

Despite their similarities, the 1942 team looked different from the 2017 team.

First, there were around 40 players on the 1942 roster, compared to the more than 130 members of the 2017 football team. In both cases, the majority of the players are from Georgia. Like many universities across the South in 1942, UGA’s football players were white.

Second, the players themselves generally were smaller, with few players weighing more than 250 pounds or reaching more than 6 feet 2 inches tall. Hasty points out that the smaller stature and smaller number of team members was because players then were expected to play both offense and defense.

This team didn’t just win on the football field. Many of them went on to serve in the military. Some, like Poschner, were injured, and others, like Walter Ruark, Will Burt and Winfred Goodman, made the ultimate sacrifice. Some went into business, and several members continued their football careers, playing for the Buffalo Bisons, Baltimore Colts, Detroit Lions, Philadelphia Eagles, Washington Redskins, Green Bay Packers and New York Giants.

Sinkwich wasn’t the only powerhouse on the field who continued to play after serving in the military. Charley Trippi, who was named the 1943 Rose Bowl Player of the Game and is the oldest living member of the Pro Football Hall of Fame, served with the Fourth Air Force. He was drafted by the Chicago Cardinals in 1945 but reached an agreement with Cardinals owner Charles Bidwell that allowed him to return to UGA and play football again in 1945 and 1946. He graduated with a degree in education in 1951.

In the years immediately following UGA’s 1943 Rose Bowl victory, the student population would decline as young adults continued to leave for battlefields and other wartime priorities, but UGA and head coach Wally Butts continued to field a football team. Many other schools suspended their football and other athletics programs during that time, and Coach Butts put the decision to a vote in which the football team decided to keep playing.

It isn’t just football that keeps the families of these players coming back to the birthplace of public higher education in America. It’s the commitment to an educational movement that continues to shape the nation. Forbes has ranked the University of Georgia No. 17 in its list of top colleges that dominate academically and athletically.

The number on Frank Sinkwich’s jersey is now in the Hargrett Library on the UGA campus. (Courtesy of Hargrett Rare Book and Manuscript Library/University of Georgia Libraries)

For the Sinkwich family, UGA has been a tradition for at least four generations. In fact, Sinkwich’s wife, Adeline Weatherly Sinkwich, whom he married in March 1942, also attended UGA and traveled with him to the 1943 Rose Bowl. Sinkwich later became very involved in raising funds for Butts-Mehre Heritage Hall as a way to honor his close relationship with Coach Butts.

“Perhaps it is the fact that we all know and understand the rich and rewarding heritage we have with UGA thanks to my grandfather and UGA, or perhaps it is our own less famous but just as rewarding experiences we ourselves have had that keep us in Athens influencing future generations to attend UGA,” said Frank Sinkwich III, who earned his Bachelor of Arts degree in 1994. “Whatever it is, with the University of Georgia’s high standards of excellence and the vibrant culture of Athens itself, it’s just not that hard of a decision.”

The tradition that began with Frank Sinkwich and the 1942 football team continues to extend far beyond the football field. For the Sinkwich family, it’s a four-generation tradition of UGA football and academics.  For the rest of the team, it’s a snapshot of a group of men who provided hope and celebration in the midst of their college careers.

“They helped us win the war, which was a greater urgency than winning a football game,” Smith said. “Any time you meet someone who was a member of the Greatest Generation, you become aware of just how much they meant to this country. They were terrific human beings, and they made a lot of big sacrifices.”