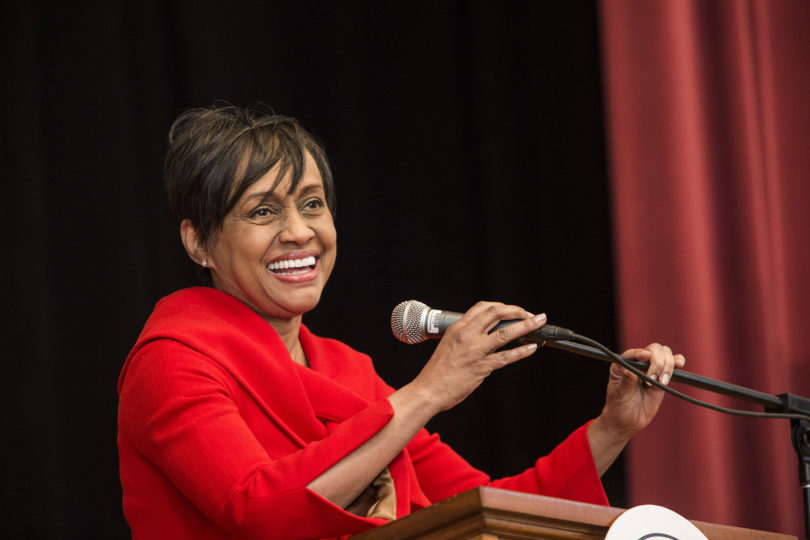 Glenda Hatchett speaks during the 2015 Holmes-Hunter Lecture in the UGA Chapel.

A sermon broke out at the Chapel Feb. 6 as Glenda Hatchett preached the importance of determination in the face of adversity at the 2015 Holmes-Hunter Lecture.

Hatchett, best-known for her nationally syndicated show Judge Hatchett and now a senior attorney with the Hatchett Firm, delivered a lecture that evoked both laughter and tears from the audience that filled the Chapel. In addition to her popular TV series, Hatchett is a former chief presiding judge of the Fulton County Juvenile Court.

The Holmes-Hunter Lecture at UGA honors Charlayne Hunter-Gault and the late Hamilton Holmes, who became the first African-American students to enroll at UGA in 1961. Held since 1985, it focuses on race relations, social justice and education with implications for inclusion and diversity. One of UGA’s Signature Lectures, the Holmes-Hunter Lecture is sponsored by the Office of the President.

Hatchett began her talk by recalling her own experiences with Holmes, who was a next-door neighbor when she grew up in Atlanta. Hatchett said her entire neighborhood was supportive of Holmes’ difficult endeavor to break the color barrier at UGA.

Throughout her lecture, which included several stories from her life, Hatchett reiterated the phrase, “The world needs to breathe.” Drawing on past and present inequality and injustice, Hatchett said leadership and a willingness to understand one another are key components to creating a better world.

One story Hatchett told was of a time in first grade when her class at an all-black school finally was provided books. Hatchett found that pages were torn from the book she had been given.

As it turned out, the school could only provide books discarded from the nearby white school.

The young Hatchett demanded a new book from her teacher, who told her the sad reality: “Glenda, colored children don’t get new books.”

Incensed, Hatchet went to her father that night to call him into action.

As Hatchett recalled, her father told her that the teacher was right. She wouldn’t get any new books that year.

Hatchett said she didn’t understand her daddy’s point at the time, “but I get it now.”

“He couldn’t fix the system where colored children couldn’t get new books, but he could fix me,” she said. “He wouldn’t let me linger at the pity party.”

Hatchett directed her final point to the students in the Chapel. She said people will try to tell them that they can’t do things because of their religion, gender, ethnicity or class.

“They’re going to tell you all the reasons you can’t do it,” she said.

Her voice rose into the shout of a preacher: “You tell them, that’s the old story, and that you’ve come to write a new story.”