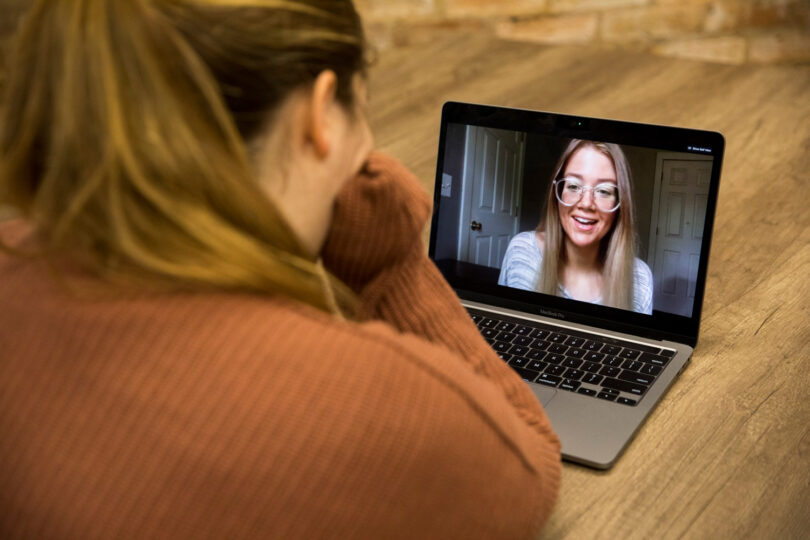 As a student mentor with the John Fontaine Jr. Center for Alcohol Awareness and Prevention, Carolina Slater (on screen) has committed to helping first-year students avoid unsafe drinking practices and find ways to have fun without drugs or alcohol. (Photo by Dorothy Kozlowski/UGA)

Nearly 15 years in, the Fontaine Center has helped create a safer campus culture.

Liz Prince spends her days helping students navigate difficult situations, traumatic experiences, and consequences of their decisions. But she always focuses on the positive.

Even when talking about the ongoing pandemic, which has forced students to adjust to new realities, Prince starts by looking at the bright side.

“In the spring, we saw more people getting outside to enjoy fresh air in a social distancing manner and many people adding exercise to their daily routines. For many people, that wasn’t happening pre-COVID,” says Prince, UGA’s director of health promotion and the John Fontaine Jr. Center for Alcohol Awareness and Education. 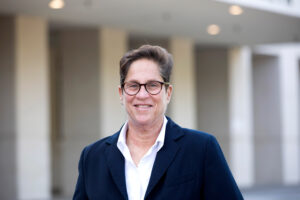 Liz Prince is the director of health promotion at the Fontaine Center. (Photo by Dorothy Kozlowski/UGA)

And there were other ways that people, particularly UGA students, have been focusing on selfcare. “In that sense, things probably got a little bit better.”

Make no mistake. Prince is not blindly positive or disconnected to harsh realities—she can easily catalog a list of pandemic-related concerns. But she starts difficult conversations with a sense of hope.

“For people in general, the positive typically resonates better than the negative,” Prince says.

It’s that uplifting approach that drives the Fontaine Center. The center, housed within the University Health Center and the Division of Student Affairs, offers programs focused on prevention, early intervention, and recovery support for issues related to alcohol and other drugs. It also offers programs related to relationships and sexual violence prevention and advocacy. The center has been helping to shift the campus culture away from the kind of high-risk drinking that plagues colleges across the country toward healthier ways to cope with stress and navigate the college experience.

Now, the center is playing a crucial role in helping students stay safe and manage anxiety in the midst of the COVID-19 pandemic. 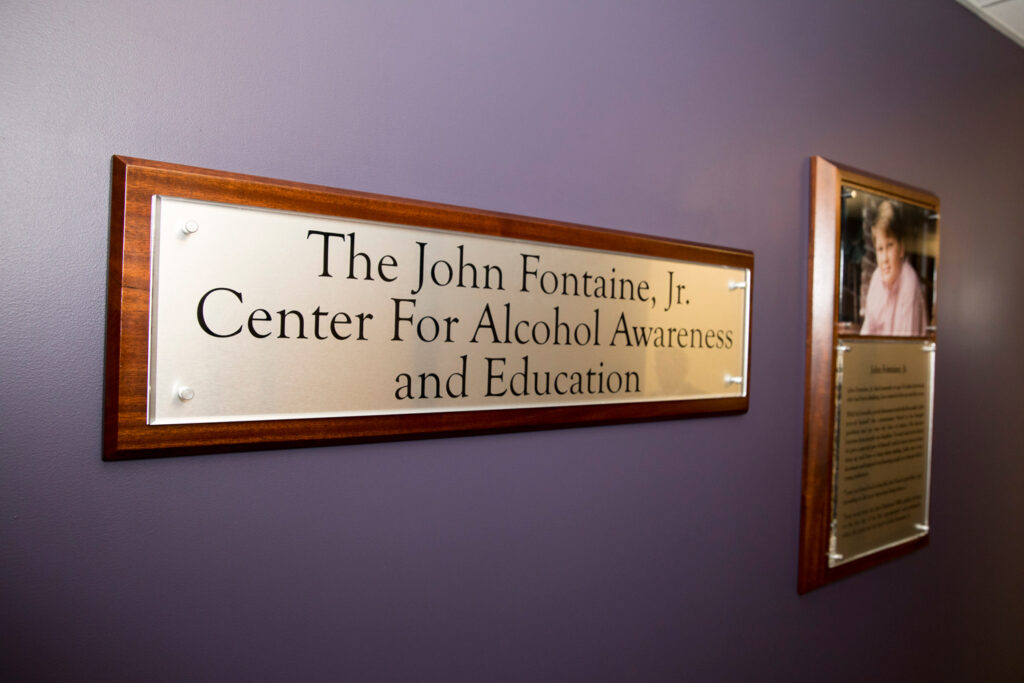 In 2000, 16-year-old John Fontaine Jr. died in a car accident in which the driver of the car he was in had been drinking. Hoping to save others from the grief they experienced, Jack and Nancy Fontaine provided a gift to create the Fontaine Center in John’s memory. (Photo by Dorothy Kozlowski/UGA)

While guided by hope, the Fontaine Center is deeply rooted in an acknowledgment of a serious problem.

In 2000, John Fontaine Jr. was only 16 when he got into a car with a friend who had been drinking. Jack M ’79 and Nancy Fontaine got the kind of late-night call that parents dread. The friend had lost control of the vehicle, and it hit a tree. John died instantly.

Through their grief, they resolved to take action. Jack, who had been a student at UGA in the 1970s, dropped out because he succumbed to a problematic campus drinking and drug culture. The Fontaines saw an opportunity to improve the culture and hopefully have a broader impact through the Fontaine Center.

“What happened to John and so many others across this country is totally avoidable,” says Jack Fontaine, who has been sober now for 33 years. “But it starts with awareness. It starts with education with the parent, child, and the school.”

Dr. Jean Chin BS ’78 was the executive director of the University Health Center when the Fontaines provided a gift to create the Fontaine Center in honor of John Jr. She recalls a conversation with the Fontaines in which they laid out their hope for the center.

It was pretty simple. “If we could prevent one parent from receiving the tragic phone call we received, that’s how we would see the center as a success.”

Over time, the Fontaines’ definition of that “tragic phone call” has evolved. There are other tragedies that happen from substance abuse, Jack Fontaine says, including DUIs, failing grades, or sexual assault. The Fontaine Center aims to reduce all of these.

If we could prevent one parent from receiving the tragic phone call we received, that’s how we would see the center as a success.” — Jack Fontaine

Over its nearly 15 years of existence, the Fontaine Center has gradually expanded its services to create a safer campus environment.

It started by creating programs aimed at abuse prevention. Previously, there was no coordinated effort on campus aimed at substance misuse prevention. Instead, the health center addressed the behaviors of individuals who found themselves in trouble.

“It took some time,” says Chin, “but gradually the Fontaine Center was able to broaden our ability to move from individual treatment to a broader campus environment focus.”

This included educational programs for first-year students, one of the highest risk groups for substance misuse.

Carolina Slater was a freshman at another university when two of her friends were hospitalized because of alcohol-related incidents. One had alcohol poisoning from drinking too much at a party; the other, it appeared, had someone slip a drug into her drink. The experiences made an impression. So, when Slater transferred to UGA, she joined one of the Fontaine Center’s peer mentoring programs.

Student mentoring and participation is crucial to the center’s work. Students not only expand the reach of the center’s six-person professional staff, but they also provide a gut-check for the messages being delivered to young adults.

Slater, a biology major and public health minor, is part of a group of students who reach out to freshmen. They offer guidance on avoiding unsafe drinking practices and encourage first-year students to find fun outside of drugs and alcohol. She likes to share a list of 25 things to do in Athens without alcohol.

“We focus on harm reduction,” Slater says. “So, we tell them, ‘You don’t have to go out every night or every weekend to have fun in college.’”

When the pandemic hit in the spring, the Fontaine Center went virtual, setting up confidential counseling and education sessions, reaching out to students through social media and hosting virtual yoga, mindfulness, and nutrition classes.

When campus reopened this fall, the center took a hybrid approach of in-person and virtual programming. Counselors and coaches measured their offices in the University Health Center to ensure a 6-foot distance between chairs and couches. Before entering the center, everyone must go through a health screening process. If the weather’s nice, they might meet with students outside.

“If we can be in an environment where we’re able to practice social distancing in addition to wearing masks and the environment is safe, we’ll do it,”
Prince says. “Otherwise, it’s done virtually.”

‘Meeting Them Where They Are’

Whether in-person or virtual, the Fontaine Center staff greet students with a consistent approach. Prince describes it as “meeting them where they are”: a strategy that focuses on harm reduction rather than tough love.

A few years ago, a student was referred to the center because he was having academic challenges and had received alcohol-related tickets from the police. Prince says the student was consuming as much as a dozen drinks in a night and blacking out. Still, he didn’t see anything wrong with what he was doing.

“Had I gone in guns blazing and said you just need to stop everything, the student is probably going to go through the motions. Probably with very little changing,” she says.

Instead, Prince asked about the student’s aspirations and then asked about how his choices might affect them. Eventually, the student—not Prince—suggested he try to cut back on the number of drinks consumed in a night. Prince offered some tips on strategies for that.

After some success, the student decided to cut back even further. Eventually, he showed enough progress to move on from the program.

Sometime later during Commencement season, Prince was walking through campus when she heard someone shout from a car, “Hey, Alcohol Lady!”

She turned to see that student she had nudged toward more moderate drinking. He pulled over to speak with her. As Prince recalls, he said, “I really appreciate what you did. You didn’t pass judgment on me, you didn’t tell me to stop, but you allowed me to work through what I needed to do. I’m being much safer, and I feel better.” He looked healthier, too, Prince adds.

In a typical year, the Fontaine Center staff hold more than 1,800 individual appointments with students and meet with thousands more through group sessions. Still, it’s impossible to tally the many lives that have been changed thanks to the center.

But with dozens of stories such as these piling up over the years, it’s not too hard to imagine that the Fontaine Center has fulfilled Jack and Nancy’s hope to avert a single late-night tragic call. And more than likely, the center has done this many times over. 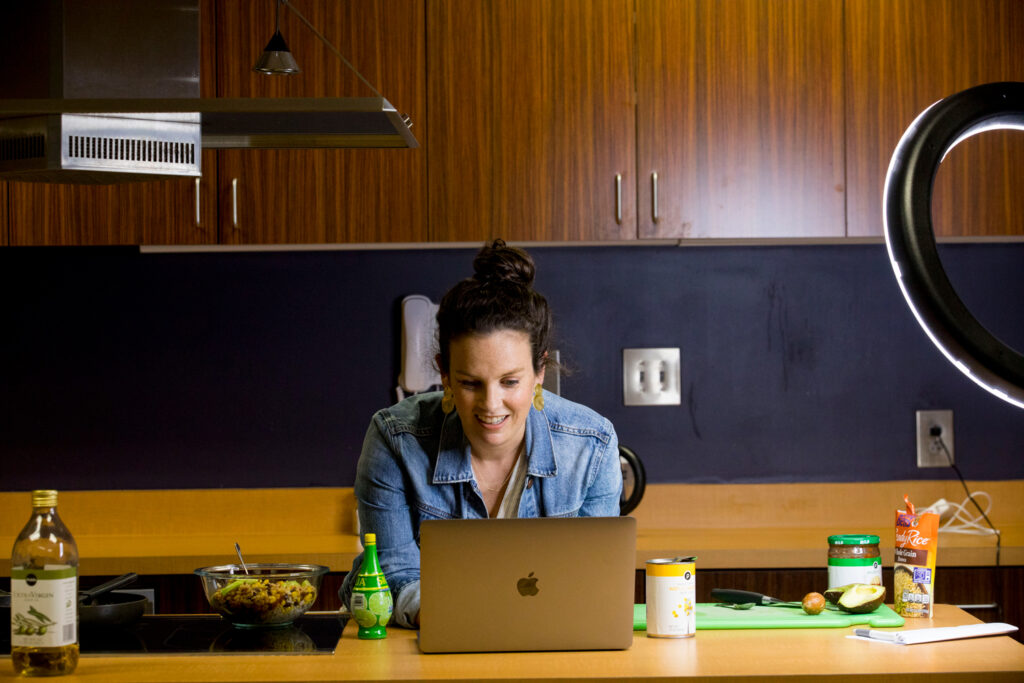 Beth Kindamo, a nutrition education coordinator, holds a virtual cooking class for the Fontaine Center. Virtual yoga, mindfulness, and other well-being classes keep students connected even during the pandemic. (Photo by Dorothy Kozlowski/UGA)

To address the relationship between sexual violence and alcohol, the Fontaine Center offers counseling, peer mentoring about healthy relationships, and a 24-hour support hotline (706-542-SAFE).

“It’s helpful for them to connect with other students who have done the work and have been successful,” says Chin. “That community allows interaction to happen.”