Dan Geller moved to Atlanta from Waukesha, Wisconsin, to attend Georgia Tech. He made it as far as orientation and decided it just didn’t feel right. He didn’t really want to be in the middle of a big city. “I wanted more of a college experience, like you see in the movies,” recalled Geller.

A trip up to Athens changed his life. His girlfriend’s stepmother drove him to see the University of Georgia. Geller recalled, “I stepped out and put my foot on the ground and it was electric. I remember it so vividly. I looked around and said, ‘This is it. I’m going here.’”

He received his bachelor’s degree in biochemistry from UGA in 1996, then his master’s degree in biological engineering in 1999, but then waited 18 years before getting his Ph.D. 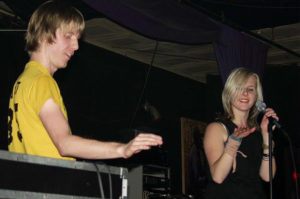 Dan Geller performs with his musical partner Amy Dykes in the synth-pop duo I Am the World Trade Center at the 40 Watt in Athens circa 2001.

After years in successful bands, after starting an indie record label called Kindercore, after traveling the world to play music, after 9/11 and the demise of his band called I Am the World Trade Center (which he started in 1999), he returned to Athens. In 2017, he earned his Ph.D. in engineering, making Geller a “Triple Dawg.”

Geller started the record label Kindercore with his friend and bandmate Ryan Lewis in the 1990s. The name was a play on “hardcore” punk and all of the other “cores” that followed, such as emocore and grindcore, said Geller. At the time, the label was signing a bunch of pop bands reminiscent of the Beatles. “We joked that we were making punk for kids, so I made up the name Kindercore,” laughed Geller.

Fast forward to 2016 when Lewis came to him with the idea to start a record pressing company. “Ryan had this great idea of developing a renewable substitute for vinyl, and he came to me because he wanted to use the name Kindercore from the record label,” said Geller.

The birth of Kindercore Vinyl

For two years, Geller, Lewis and their two other partners – Bill Fortenberry and Cash Carter – tried to get funding. “We had no assets,” said Geller. “Just an idea.” They networked extensively, met with investors and near the end of the second year decided Kindercore Vinyl probably wasn’t going to happen.

Then they heard that one more potential Athens-based investor wanted a meeting. They convened at a coffee shop in Five Points, and at meeting’s end, the investor said, “We’re going to make this happen.” This investor wishes to remain anonymous, but his group got the company off the ground. 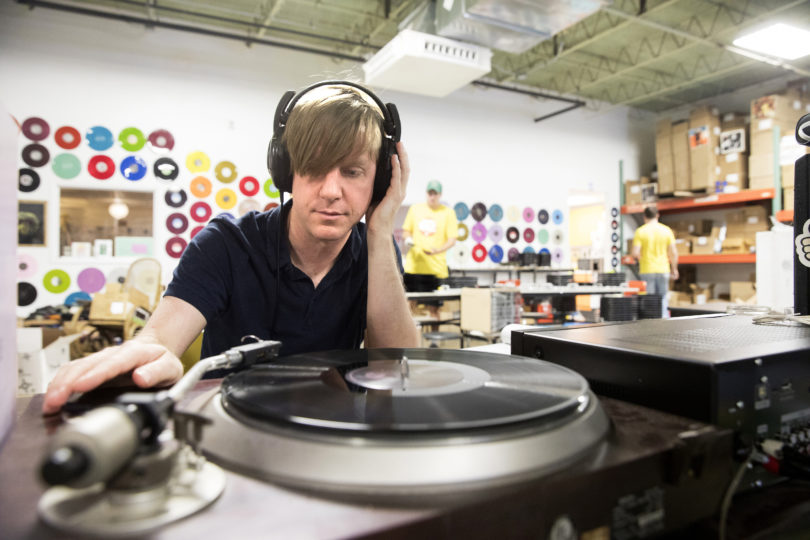 Dan Geller, chief technical officer and bioengineer at Kindercore Vinyl and public service associate in UGA’s College of Engineering, tests the sound quality of a record. 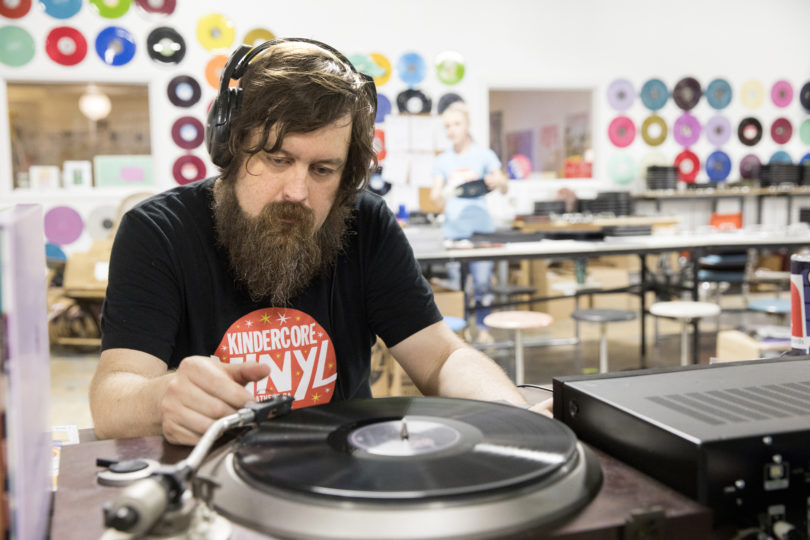 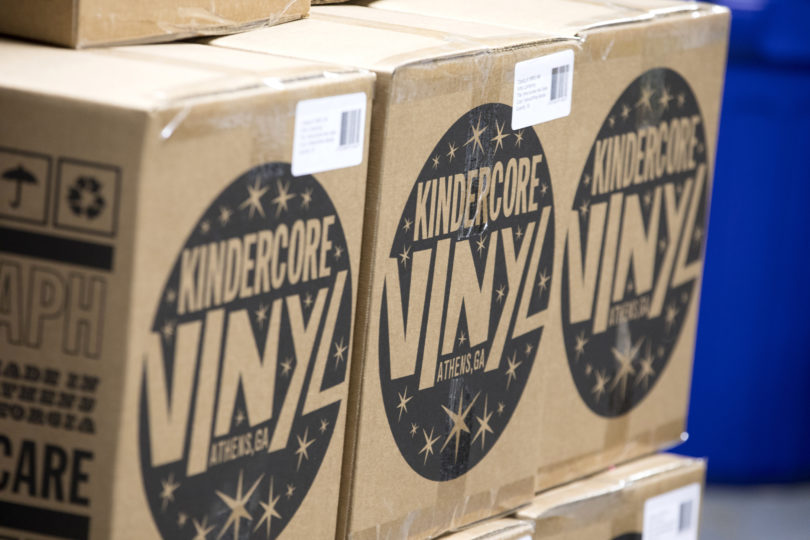 Packing boxes inside the production plant at Kindercore Vinyl. 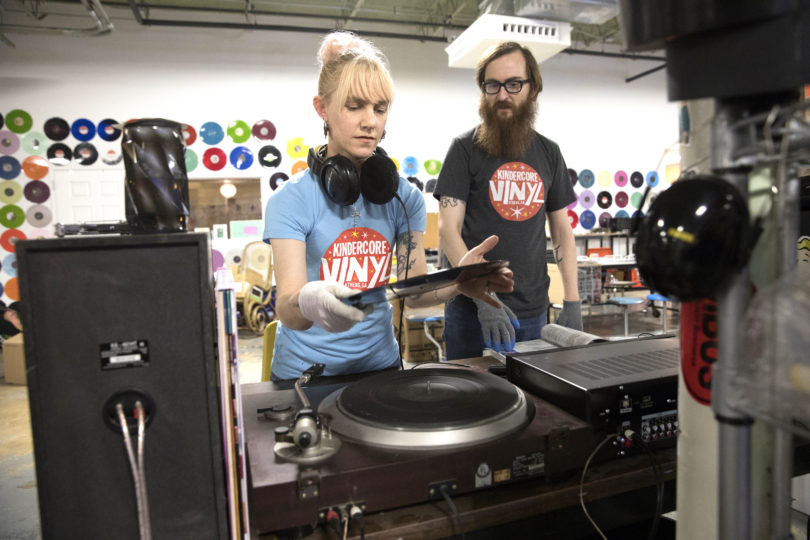 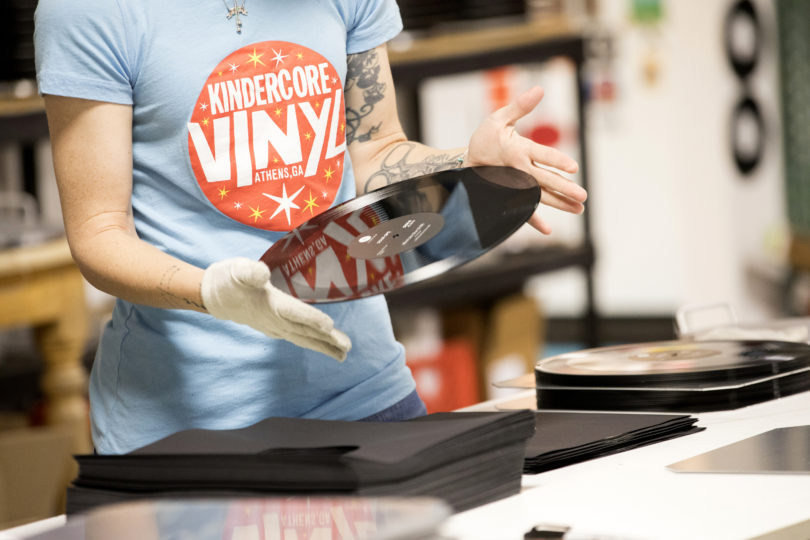 Priscilla Lewis inspects a record about to be played for quality control testing inside the Kindercore Vinyl production plant. 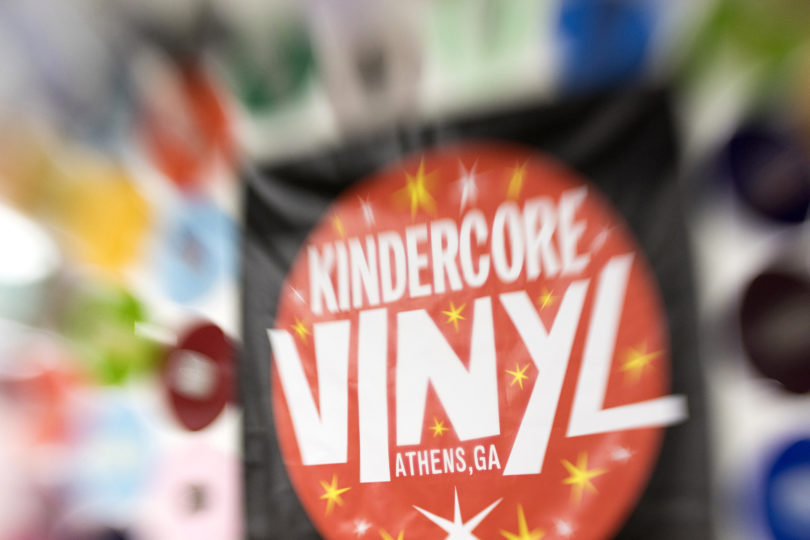 Detail of the Kindercore Vinyl logo. 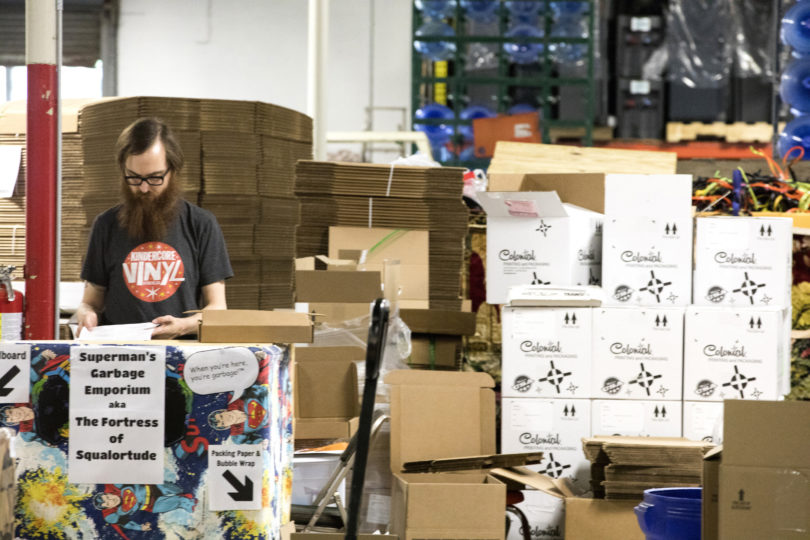 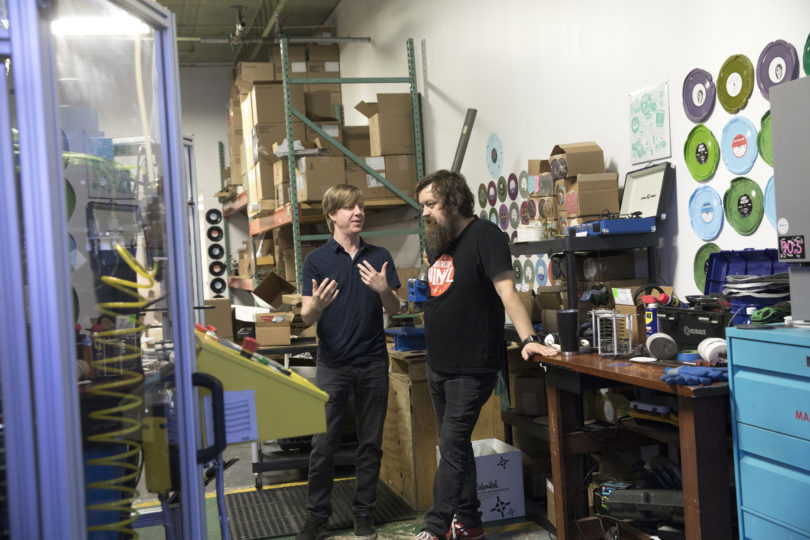 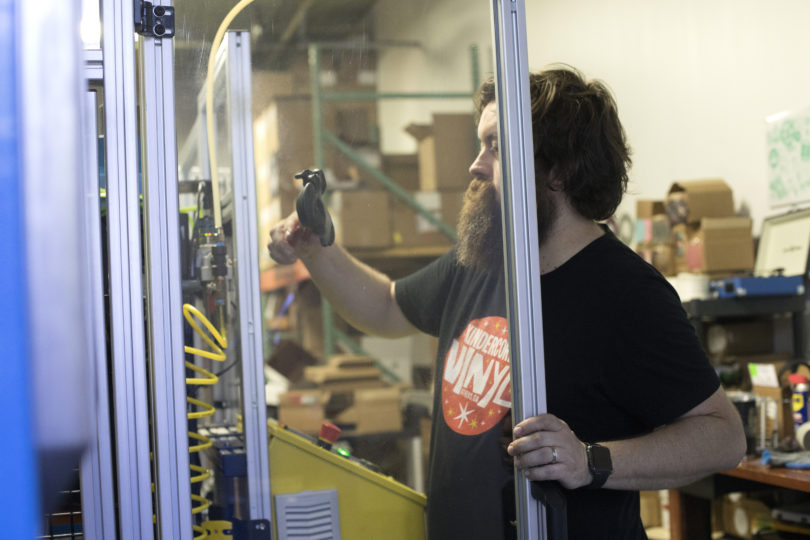 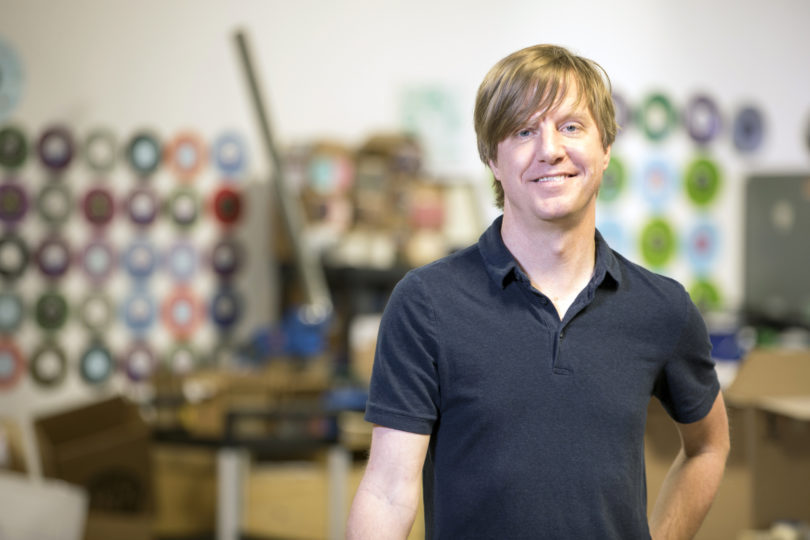 Triple Dawg and UGA employee Dan Geller is a co-founder of Kindercore Vinyl.

(All gallery photos by Dorothy Kozlowski/UGA)

The Music Business Program at UGA’s Terry College of Business has been a fount of talent for Kindercore. Several former interns are now full-time employees. “We couldn’t have found employees like this through an open search,” said Geller.

Before the company had enough funds to hire some of its interns, the students kept working for free, after their internships were finished. “They basically said we’re just going to stay here until you hire us,” said Geller.

Kindercore also recently submitted a project to UGA’s Engineering Capstone Senior Design Course to design an automated punch to remove the labels from rejected records so the company can recycle the vinyl.  Now, the company is waiting to see if any of the capstone teams select their project. “But who wouldn’t want to work with a record company?” said Geller. 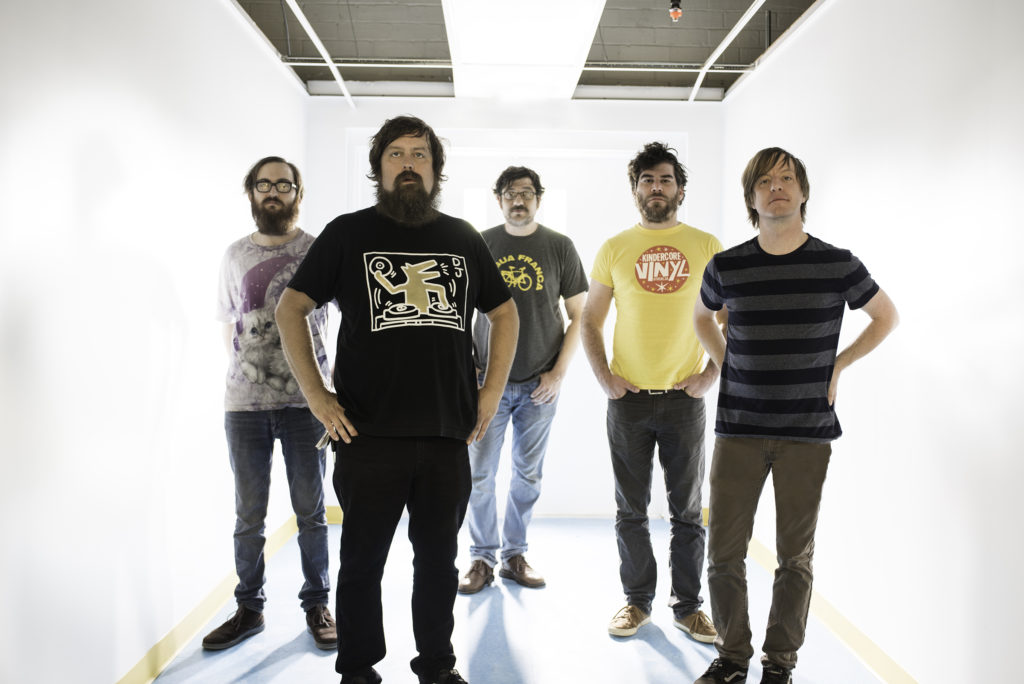 The record pressing industry as a whole is growing like crazy. According to online statistics, market research and business intelligence group Statista, 14 million LPs were sold in the United States in 2017, up more than 1,000 percent from 10 years earlier.

Geller has a few ideas why his industry is doing so well, citing Gen Xers with nostalgia, the superior sound quality and tactile experience of records in general.

But Geller says Kindercore’s bread and butter is young bands pressing 500 records then selling to millennials. “Records are a brand new thing for them. They grew up with every song they ever wanted in their pocket. So how do they show someone that they are a bigger fan than anyone else? They spend $20 on a record. That’s my theory,” said Geller.

The petroleum-based vinyl that has been used for over 100 years needs an upgrade, and Kindercore hopes to be the first company to replace it with something that can be grown on a farm. Geller, who works as a research engineer at UGA developing plant-based alternatives to fuels and other products, wants to revolutionize the materials of the records themselves. While this involves several disciplines in addition to Geller’s, he is working with other engineers, chemists and Georgia industry to develop a new kind of polymer so that Kindercore can become the first pressing plant to offer petroleum-free records.

The company is using new record pressing machines too, which they purchased from an innovative Canadian company called Viryl. Before Viryl created a modernized record press, the machines making records hadn’t been updated since the 1950s. On top of being old, they were difficult to find.

I thought I would become a professor. But then all this music business got in the way.” — Dan Geller

These new machines are much less likely to produce a bad record. The company also employs microscopes and audio testing to ensure the sound of every record is just right, but their secret weapon is Priscilla Lewis, who is in charge of Kindercore’s quality control. “She can simply look at a record and tell if the sound will be off. She has an amazing talent for that,” said Geller.

Geller currently works full time in UGA’s College of Engineering and acts as the chief technical officer at Kindercore Vinyl. He’s one of the DJs in the popular local group the Booty Boyz and just joined another band called Vision Video, even though he vowed never to be in another band again.

“My life has been very weird,” laughed Geller. “I thought I would become a professor. But then all this music business got in the way.”