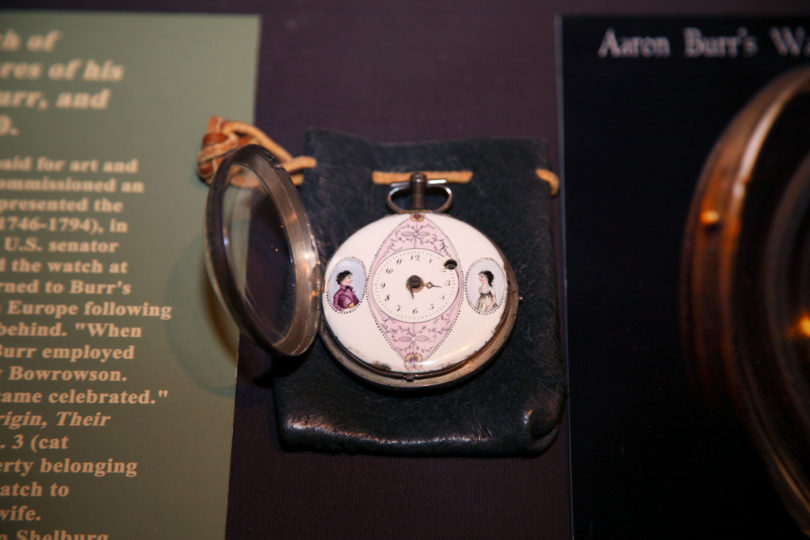 A display of rare items exploring the life of Aaron Burr is on display until Jan. 31 at the Hargrett Rare Book and Manuscript Library galleries of the Richard B. Russell Building Special Collections Libraries.

The collection is said to be the most comprehensive portrayal of the complicated Founding Father,  who distinguished himself during the American Revolution and went on to become an influential lawmaker. Burr served as U.S. vice president under Thomas Jefferson, but his legacy is overshadowed by political disputes and his infamous duel with Alexander Hamilton.

Many of the items in the collection relate to Burr’s contemporaries such as George Washington, Hamilton, Jefferson and Benedict Arnold. The exhibit includes Revolutionary War intelligence, the 1800 report of the first recorded murder trial in the U.S., an 1807 subpoena from Burr’s trial for treason and Burr’s watch, which contains the only known portrait of his first wife and the earliest known portrait of his daughter, Theodosia.

The exhibit previously was on view at the Grolier Club in New York, which also published the book, Burriana: A Catalogue of Rare Books, Pamphlets, Letters, Manuscripts, Documents & Objects by, About or Relating to Aaron Burr.

Hardison has been amassing the collection since the 1990s. He said he found Burr an interesting historical figure.

The Hargrett Library gallery is open weekdays from 8 a.m. to 5 p.m. and Saturdays from 1-5 p.m.