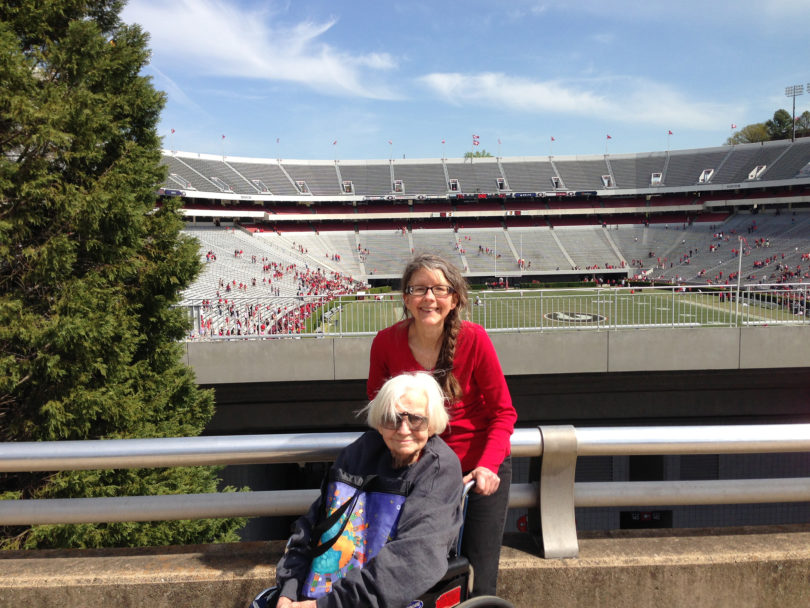 Mary Miller was filled with worry the day her mother was diagnosed with Alzheimer’s disease.

As the Peabody Awards Collection archivist at the Richard B. Russell Building Special Collections Libraries, Miller loves her job, which keeps her busy.

With her mother’s health in decline, however, Miller knew her life would only get more difficult to balance.

Miller’s mother, Mary “Buff” Miller—or Miss Buff, as she was known—led an interesting life. She earned her pilot’s license when she was young, and after graduating from the University of Maryland embarked on a 56-year career as a chemical engineer.

At one time, Miss Buff was the only woman employed by Glenn L. Martin Co., an American aircraft and aerospace manufacturing company. She later worked for NASA developing rocket planes. And she once was honored by the National Association of Manufacturers as one of eight “women in key posts in the defense industries.”

An only child, Miller admired her mother and enjoyed the time they spent together. But when Miss Buff was diagnosed with Alzheimer’s in 2004, Miller knew she would no longer be able to handle things by herself. She needed help.

“I started looking into resources in the community that would enable me to continue to take care of her at home,” Miller said. ” I really didn’t want to put her into some kind of permanent care facility.”

While searching, Miller came across the Athens Community Council on Aging, a nonprofit organization that works to maintain and enrich the lives of older individuals throughout Northeast Georgia. ACCA is one of the organizations supported by UGA’s Campaign for Charities, which ends Dec. 14.

It’s home to programs like Meals on Wheels and the Center for Active Living that cater to the needs of older individuals.

One of its services is the Adult Day Health Program, located at the Bentley Center—just down the road from Miller’s job at the Russell Special Collections Building. The fee-based program offers day care for adults with a physical or mental disability.

“I didn’t need the Adult Day Health services at first, but as her dementia worsened, I did,” Miller said.

The program allows individuals who don’t need 24-hour institutional care but aren’t capable of independent living to come and essentially “spend the day” at the Bentley Center, Miller said.

It’s ideal for individuals, like Miller, who are full-time caregivers to a family member because it lets them run errands or spend time at work worry-free.

“It’s a complete package,” Miller said. “When I would drop her off, I wouldn’t have to worry about her again until I picked her up.”

The program provides nurses, physical therapists and people trained to work with dementia patients. And it provides meals for those spending the day.

Miller has been involved in ACCA for seven years now and continues to show the program the support that they showed her, even after her mother’s passing last year at age 97.

“She was the most important person in the world to me so anything they did for her, they also did for me,” she said. “I give back some to them because they extended my mother’s life by giving her such excellent care.”