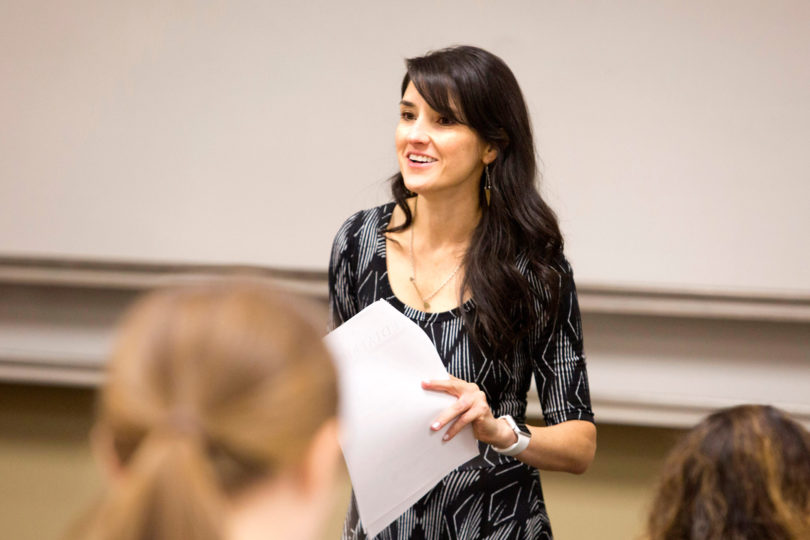 Amanda Abraham is an assistant professor of public administration and policy in UGA's School of Public and International Affairs.

Athens, Ga. – In 2015, more than 30,000 Americans died from overdosing on opioids, and a new study led by the University of Georgia shows that one of the hardest hit populations-low-income Americans on Medicaid-isn’t getting the help it needs to combat opioid addiction.

The researchers analyzed data from the 2012 National Survey of Substance Abuse Treatment Services to compare county-level distributions of opioid use disorder rates with opioid treatment programs that accept Medicaid. The study, published in Health Services Research, found that large portions of the Southeast don’t have enough opioid treatment programs to match their high rates of opioid use disorder, or OUD.

In many of the counties, there aren’t any treatment programs, and where there are programs, they are more likely to be run by for-profit providers, the majority of which do not accept Medicaid.

“We are in the midst of an opioid epidemic,” said lead author Amanda Abraham, an assistant professor of public administration and policy in UGA’s School of Public and International Affairs. “Deaths related to opioid overdose increased by more than 200 percent over the past 15 years, and the epidemic has disproportionately impacted the Medicaid population.”

One key to battling the epidemic is increasing access to medication-assisted treatment, the most efficacious of which is methadone, Abraham said. But there are only about 1,200 opioid treatment programs in the U.S.-far too few to meet the demand.

The Affordable Care Act expanded access to substance use disorder treatment for Medicaid enrollees in theory by mandating that Medicaid expansion plans cover addiction treatment, but many treatment facilities don’t take Medicaid and patients end up having to pay out of pocket or go without care.

“In 2012, only Fulton County in Georgia had any opioid treatment programs that accepted Medicaid insurance,” Abraham said. “Thus, there is no access to treatment for Medicaid enrollees in rural counties in Georgia, and similar disparities exist across the Southeast.”

Recently published data from the 2015 NSSATS shows that of the 55 opioid treatment programs in Georgia, only three accept Medicaid insurance.

The study’s researchers analyzed clusters of data to pinpoint rates of opioid use disorder and corresponding rates of treatment providers that accept Medicaid across the country. Their work showed a concerning gap between opioid use disorder levels and the facilities that can treat them, Abraham said.

“We are hoping the study will encourage policymakers to consider the potential negative impact of removing addiction treatment from the essential health benefits in Medicaid expansion plans and reversing the parity requirement to cover addiction treatment services on par with medical and surgical benefits,” she said. “This decision will very likely worsen the opioid epidemic. We also hope states will consider strategies to improve availability of OUD treatment for Medicaid enrollees.”

The study was published in the journal Health Services Research and is available at http://onlinelibrary.wiley.com/doi/10.1111/1475-6773.12686/full. Co-authors include Jerry Shannon, UGA Department of Geography; Christina Andrews, University of South Carolina College of Social Work; and Marissa Yingling, Clemson University College of Behavioral, Social and Health Sciences.