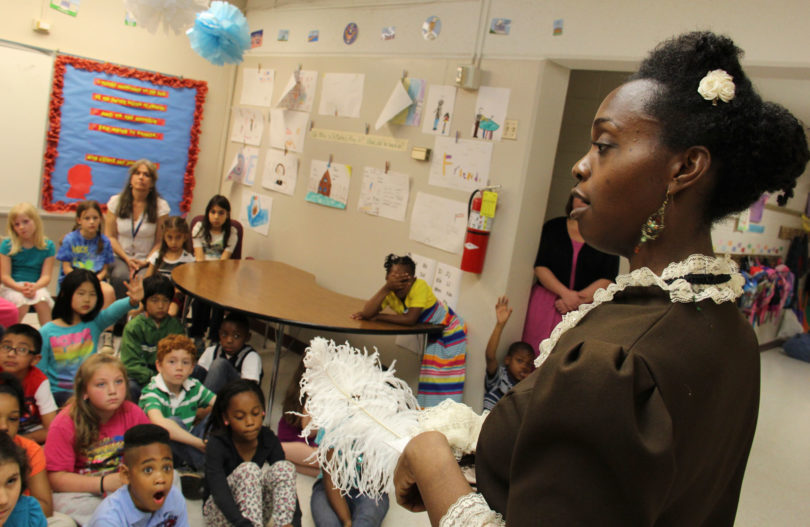 The jaws of second-graders dropped at Barnett Shoals Elementary School one Friday morning last spring when they were introduced to a historical figure who had traveled 150 years through a time machine to meet them.

It was Ida B. Wells—the anti-lynching, pro-women’s rights journalist of the late 19th and early 20th centuries.

Jennifer Johnson, a master of public administration candidate in UGA’s School of Public and International Affairs, played Wells for the students as part of a creative project to introduce students to American historical figures.

Johnson had rented a brown period dress and carried a white feather pen for some extra panache.

During a presentation and question-and-answer session, Johnson gave the students a G-rated version of the grave injustices African-Americans faced in the Jim Crow South and beyond. She also talked about Wells’ attempts to combat those injustices through her writings and community organizing.

Speaking as Wells, Johnson told the students she supported equality, justice and peace.

This apparently sounded familiar to one student who blurted out, “Like Martin Luther King!”

“Jesus, too,” said another.

The idea of the project is to bring volunteer actors into the elementary school to portray an array of historical figures.

“There is something really exciting for students about someone coming through a time machine to visit them,” LePere-Schloop said.

Abraham Lincoln, Susan B. Anthony and Eleanor Roosevelt also visited the school this past spring, played by UGA graduate students from the MPA program.

The visitors helped capture the imagination of students who have just as many questions about time travel as they do about history.

“The teachers have done an amazing job of prepping the students ahead of time about the people coming through the time machine before the visits,” LePere-Schloop said.

Johnson, after her visit as Wells, remarked at how well the students knew their history.

“They are sharp,” Johnson said. “They seem to know a lot.”

After Johnson’s presentation and question-and-answer session, the students lined up to shake the hand of such an important guest.

Without prompting, they continued to ask her questions about Wells, her family and community.

LePere-Schloop borrowed the time machine idea from her mother, Mindy LePere, a retired Detroit public school teacher who established a similar project at her school.

LePere-Schloop said she values these kind of creative classroom endeavors, which she fears gets lost with the pressures teachers and schools face with standardized testing.

“I wanted to try to bring as much of that experience to Isabella as I could, as well as the other students in her school,” she said.

This academic year, LePere-Schloop is trying to connect with parents of the elementary school students as well as groups on the university’s campus to expand the program with more participants-meaning more historical figures-and, hopefully, a budget for renting costumes. She is reaching out to theater groups and even those with history backgrounds.

“I’m really open to people from all different disciplines,” she said.