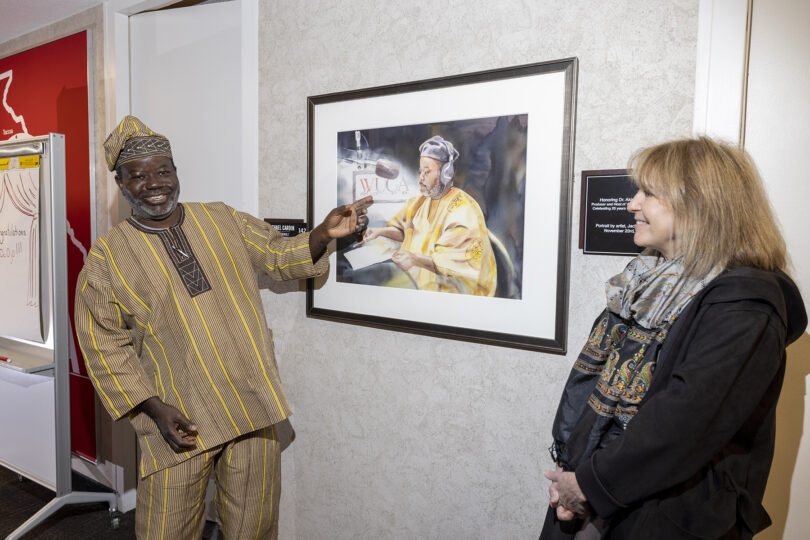 Akinloye Ojo, host of "African Perspectives," stands with a portrait created by artist Jackie Dorsey to commemorate the 25th anniversary of the show on WUGA-FM. (Photo by Peter Frey/UGA)

What started as a way to publicize the African Student Union in 1996 has become the longest-running show by the same host on WUGA-FM. Thanks to an enthusiastic audience, “African Perspectives” has been heard from car radios and throughout homes for 25 years.

Host Akinloye Ojo, an associate professor in the Franklin College of Arts and Sciences’ comparative literature department and the director of the African Studies Institute, has spent a quarter century educating the greater Athens community about African news and culture.

“‘African Perspectives’ provides an important bridge between Athens, Georgia, and the many nations and cultures of Africa, enriching our campus and our state immeasurably,” said UGA President Jere W. Morehead. “I am grateful for Dr. Ojo’s dedication to the University of Georgia and for all he has done to strengthen UGA’s connection to the world.”

Ojo began work on “African Perspectives” when he was a doctoral student in linguistics and served as cultural secretary of the African Student Union. “This started as a small idea. Who knew that it would last this long?” he said.

The weekly show details news, pop culture and music from across the African continent, airing on Sundays at 4 p.m. It also highlights issues facing Africans currently living in Georgia and the Southeast.

On Nov. 30, WUGA-FM hosted an anniversary celebration for Ojo at its studio on the UGA campus.

“I always said I enjoyed public radio because you weren’t wasting your time when you were listening,” said Jimmy Sanders, general manager of WUGA-FM and host of “Music from High Cotton.” “You are always learning something and gaining something. Certainly, that’s something that you do when you listen to ‘African Perspectives.’”

In a letter written for the occasion, Teya Ryan, CEO of Georgia Public Broadcasting, said, “Congratulations on this major milestone in the history of this program, which seeks to bring people together through greater awareness and the enjoyment of African culture, both abroad and here in Georgia.”

As part of the celebration, WUGA-FM unveiled a portrait depicting Ojo in the sound booth with his headphones on and notes out. He wears traditional Nigerian clothes in brilliant yellow against the black backdrop of the booth. His face is focused and thoughtful, reflecting the show he is about to record.

The piece was painted by local artist Jackie Dorsey, an avid “African Perspectives” listener and supporter of public radio. She used to listen to the show while picking her kids up from school, but the new Sunday airtime means she can enjoy the show at home, often while making dinner and spending time with family.

Standing with Dorsey in front of the portrait, Ojo found it hard not to get emotional about his long tenure with WUGA-FM.

“This is a lasting legacy,” he said of the portrait. “The shows come out on Sundays, but now this is lasting evidence.”

Ojo also recognized the many people who have contributed to the longevity of the program, from producer Michael Cardin and many student interns to the Athens community members who tune in each week.

“One tree cannot make a forest. If this show is seen as a forest, it’s not because of one tree,” Ojo said. “Athens has really been very supportive — surprisingly, to a level I never understand. I thought this kind of show would only be for a narrow audience, but I meet people who say they listen to the show, and you’re just blown away,” he said. “Africa belongs to the world.”