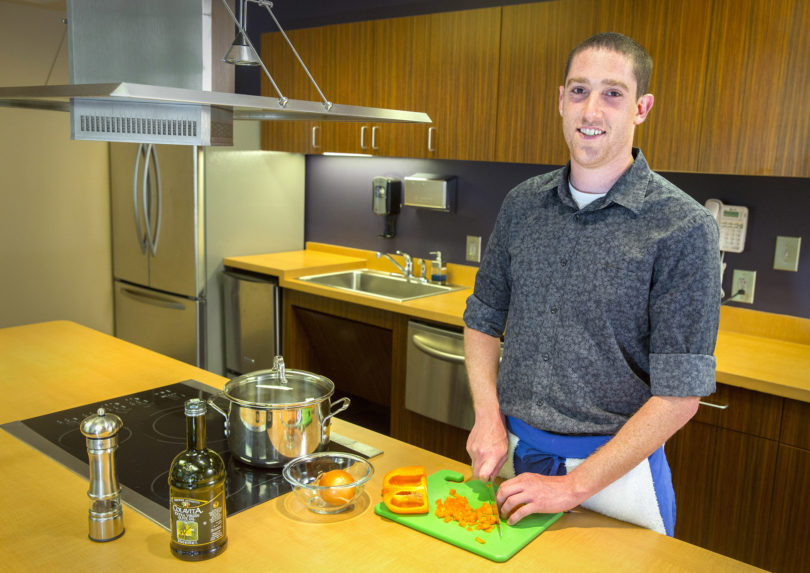 When Benjamin Gray was growing up, he wanted to pursue a career in food so bad he could taste it.

“I was really lucky to have a mom who cooked every day,” Gray said. “I was often around kitchens, though I realized I had different tastes than my mom. So I began adding flavors—admittedly, mostly barbecue sauces—to change the dishes to reflect my own tastes.”

A native of Arizona, Gray planned to attend culinary school at Johnson & Wales in Rhode Island to further his cooking skills.

“I initially wanted to own a restaurant,” Gray said. “During culinary school, I realized the restaurant industry wasn’t for me. That led me to nutrition.”

After earning his associate’s degree at Johnson & Wales, Gray decided to become a dietitian instead.

Gray returned home and got his bachelor’s degree in nutritional sciences from the University of Arizona. He then applied to internships across the U.S., a requirement for those who want to become registered dietitians.

“I had lived in the Northeast and Southwest already,” he said. “Because I wanted to go someplace new—in either the Northwest or Southeast—I applied to programs in both areas.”

As fate would have it, Gray was matched with UGA. He packed up for the trip south and moved to Athens in 2009 to start the combined master’s degree and dietetic internship the university offers in the College of Family and Consumer Sciences.

After completing the program, Gray got a job at the University Health Center as a nutrition education coordinator. It’s a versatile position that allows him to teach cooking classes, counsel students on health and wellness and mentor the Peer Nutrition Educators group.

Alongside Katherine Ingerson, a registered and licensed dietitian for UGA Food Services, Gray runs the Peer Nutrition Educators program, which gives students the chance to educate their peers about healthy eating habits.

“We train the students over the summer,” Gray said. “Then starting in the fall, the students give presentations around campus on nutrition. I get to work with a number of dietetics students at UGA.”

Along with the peer nutrition work, Gray teaches students of all majors ways to improve their health and wellness. He estimates that he interacts with nearly 2,000 students each semester when he combines the cooking classes, one-on-one counseling sessions and class presentations.

“Being part of the University Health Center, our mandate is to serve students,” Gray said. “Frequently I have days leaving work where I think, ‘I just had a really awesome interaction with a student. I think they have a new perspective on health and nutrition.’ ”

Outside of work, Gray spends time playing in or coaching Ultimate Frisbee tournaments around the country. Also an avid traveler, Gray spent time working in New Zealand in between his undergraduate and graduate degrees.

“I spent nine months, the majority of which were in Wellington, working a number of jobs,” he said.

When students leave for summer break, Gray opens up his cooking classes to faculty and staff. This summer he’ll teach two classes, one on July 9 and the other on July 22, to interested employees.

“The two dishes I’m teaching—shrimp puttanesca and smoky mustard salmon—have been popular in the past,” he said. “People are often skittish about making seafood, though they enjoy eating it. Each class will work with a seafood recipe for participants to learn.”

“Instead of telling people to eat healthy, I encourage them to eat to support health and wellness,” Gray said. “Health and wellness encompasses mental, spiritual and cultural factors. It’s important because you get to explore new cultures, textures and tastes.

“Supporting health and wellness allows you to be physically active and alert,” he added. “It lets you enjoy whatever experience you’re in.”