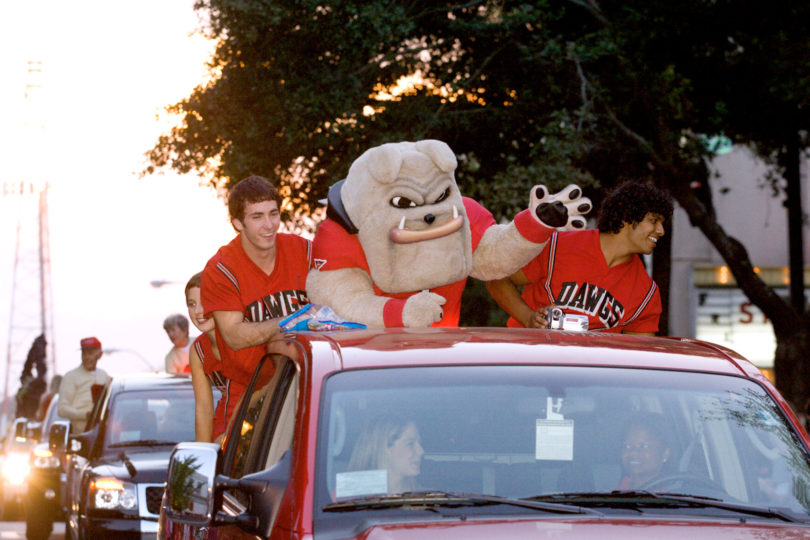 This year's Homecoming parade will wind its way through downtown Athens on Oct. 13 beginning at 6:30 p.m.

Fun, food and football will highlight a week of festivities at UGA Oct. 8-14 when alumni return to campus to join students, staff and faculty in celebrating Homecoming.

“All Roads Lead Home to Georgia” is the theme of this year’s Homecoming, which features entertainment and competitions for students, reunions and social events for alumni, the Homecoming parade and a 200th anniversary commemoration for a campus building. The week climaxes with the Oct. 14 Georgia-Vanderbilt football game in Sanford Stadium and crowning of the Homecoming Queen and King.

This year’s student events, organized by the student Homecoming Committee, include a new competition titled “Spirit of Homecoming” in which registered student clubs and organizations will compete for points as they participate in Homecoming ­activities.

On Oct. 9 the Homecoming kickoff event, “Bulldogs Drive Us Home,” a party on Tate Student Center Plaza will be take place from 11 a.m.-2 p.m. with music, free food, displays and giveaways.

Other student events include the “Brumby Beach Bash” Oct. 10, 4-7 p.m. on the lawn between Brumby and Russell residence halls, and a “Block Party” Oct. 11, 4-7 p.m. on Legion Field. Hypnotist and comedian Dale K will perform Oct. 12 at 8 p.m. in the Tate Student Center. Tickets, on sale at the Tate Center cashier’s window, are $4 advance, $6 day of show for students and $6 advance, $8 day of show for non-students.

On Oct. 13, a ceremony will be held at 10:30 a.m. to mark the 200th anniversary of UGA’s first building, Old College, which was occupied in 1806. (See story below). The ceremony will include a mass ribbon-cutting to symbolically re-open the building following a year-long renovation completed in August.

The Homecoming Parade on Oct. 13 will start at 6:30 p.m. and follow a route through downtown Athens.

The UGA Alumni Association will hold a “Sink the Dores Beach Bash and BBQ” at the Wray-Nicholson House, 298 S. Hull St., from 7-9 p.m. “Dawgs After Dark,” UGA’s Friday night entertainment programming for students, begins Oct. 13 at 10 p.m. and continues until 2 a.m. Oct. 14 in the Tate Student Center.

Students will vote throughout the week to choose the Homecoming Queen and King, who will be crowned during halftime of the football game.

Several schools and colleges will hold Homecoming activities for alumni: