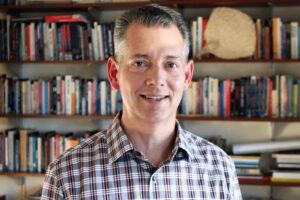 This annual event is sponsored by LeAnne Howe, Eidson Distinguished Professor in American Literature in English and director of the Native and Indigenous Studies at UGA. This event is free and open to the public.

Allen’s lecture focuses on his new book, “Earthworks Rising: Mound Building in Native Literature and Arts,” and will discuss examples of how contemporary Indigenous communities are reengaging—and reimagining—ancient traditions of building large-scale earthworks. How do these post-removal mounds make meaning for tribal citizens and broader audiences, especially when they are part of state-of-the-art public venues for Indigenous self-representation, such as the tribally specific Chickasaw Cultural Center opened in 2010 near Sulphur, Oklahoma, and the multitribal First Americans Museum located at 659 First Americans Blvd., Oklahoma City, Oklahoma.

Allen also serves as the associate vice provost for faculty advancement at UW. He’s the author of “Blood Narrative: Indigenous Identity in American Indian and Maori Literary and Activist Texts,” “Trans-Indigenous: Methodologies for Global Native Literary Studies” and “Earthworks Rising: Mound Building in Native Literature and Arts.” Allen is a former editor of the journal “Studies in American Indian Literatures” and a past president of the Native American and Indigenous Studies Association.

Since 2015, American Indian Return lectures have focused on Southeastern Native epistemologies in the fields of the humanities, science, art and technology, spirituality and Indigenous philosophies of Southeastern tribes who regard the Southeast as their original homelands.

“Scholars giving the AIR lecture tackle, among other issues, the art of rediscovering balance in all levels of education,” said Howe. “We hope that through the inclusion of Southeastern Indian histories and cultures the wider UGA community gains a greater of understanding about American Indians and Indigenous peoples.”

The American Indian Returns event is sponsored by Eidson Foundational Fund in the department of English, the creative writing program, associate professor Channette Romero and the UGA Institute of Native American Studies.