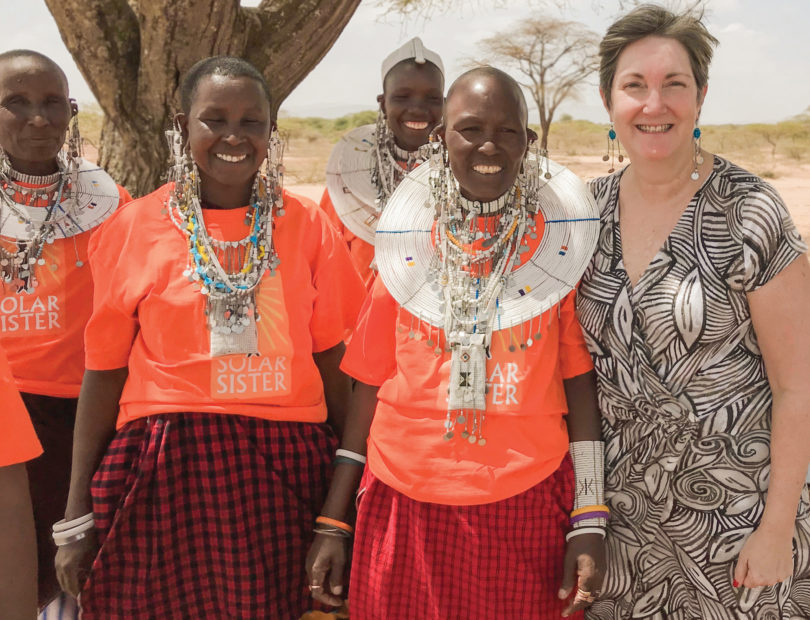 On a visit to rural Uganda, Katherine Lucey (far right) learned that many households did not have access to networked electricity. To empower the women who run those households, Lucey founded a nonprofit, Solar Sister, that helped women become solar-energy entrepreneurs.

After spending 20 years in the banking industry specializing in energy investment, Katherine Lucey ABJ ’81 saw a need. Working with a family foundation, she traveled to Uganda and saw the impact solar energy had on rural parts of that country and others where many people don’t have access to network electricity and have to rely on burning kerosene and candles for light. Seeing the impact of replacing those toxic and expensive fuels with clean, safe solar lights inspired her to start her own nonprofit organization, Solar Sister.

While electricity was a need in these rural areas, Lucey also realized the potential to empower women. She began marketing solar lamps to the women of the households. Selling directly to them saved the daily trip into town to pick up kerosene for their lamps.

“We decided the best way to reach them was through a network of women entrepreneurs working in their communities,” Lucey says. “That became the genesis of Solar Sister. Now we help them start businesses where they sell the solar lamps, solar home systems, and solar phone chargers.”

By having this door opened, the women in these communities are able to provide for their families and become more independent. They control their own inventory and marketing while also meeting monthly with other women in the organization to train and share best practices.

While these women face challenges being entrepreneurs in rural Africa, Lucey says having the support of other women facing the same challenges is what makes the organization special.

“It can be very discouraging when everyone around you is saying you can’t do this,” she says. “But they have this sisterhood, these other women, who are telling them you can do this, you can succeed, and we believe in you. That makes all the difference in the world.”