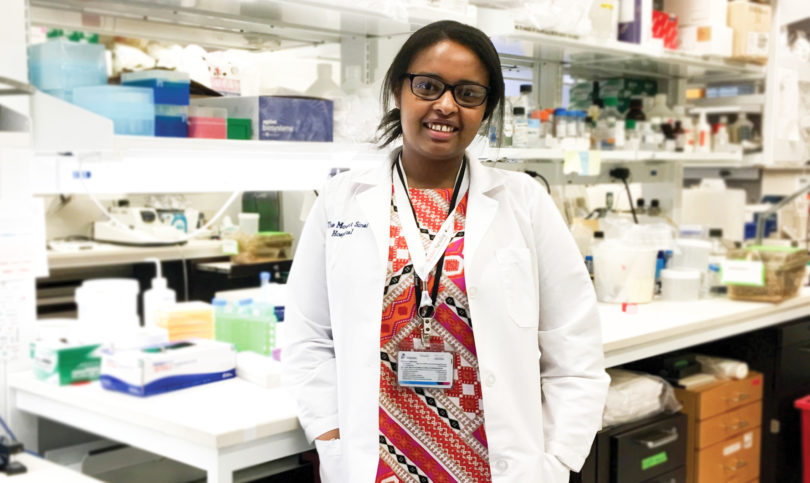 Ayan Hussein says that going to school at UGA, where she earned a bachelor's degree in psychology, is the best decision she ever made.

Ayan Hussein is currently finishing her doctoral work in neuroscience.

When civil war broke out in Somalia in the early 1990s and raged on with no end in sight, Ayan Hussein’s parents knew they had to get their five children to safety.

The family fled first to a refugee camp in Kenya and then to a community with a significant refugee and immigrant population in Clarkston in 2003. Once in the United States, Hussein BS’12 realized that something she had only dreamed of was now actually possible: She could pursue higher education.

As a child, Hussein had promised herself that education would be her priority, despite being born into a culture that she says doesn’t place much value on women’s schooling.

“Even though adversity seemed to follow us, I made sure that nothing stood between my education and me,” says Hussein, now finishing her doctorate in neuroscience at Icahn School of Medicine at Mount Sinai in New York. As an undergraduate, she was awarded the prestigious Gates Millennium Scholarship, funded through the Bill and Melinda Gates Foundation, which enabled her to attend UGA. But the scholarship wasn’t a panacea for all the obstacles she faced.

“Despite a full scholarship and a strong desire to learn, I was poorly prepared for college,” she says, “but I quickly learned that I had to ask for help if I wanted to perform better.”

Moving to America changed my life. And choosing to attend UGA was the best decision I’ve ever made.”

When her academic performance slipped, Hussein sought mentors and tutors, and her grades quickly improved. She augmented her college experience in other ways, like getting involved in campus organizations and taking a part-time job in University Housing.

Hussein went on to study at Oxford University through UGA’s visiting scholars program and receive multiple fellowships and awards, including the Paul and Daisy Soros Fellowship for New Americans and a National Science Foundation graduate fellowship for neuroscience research.

In her thesis work, Hussein ultimately hopes to inform the development of a new therapeutic for Parkinson’s disease.

Recognizing the valuable role mentors played in helping her reach her goals, Hussein became a Gates Millennium Ambassador in 2008, helping connect students to the foundation that helped make it possible for her to become a Bulldog and pursue higher education.

“Moving to America changed my life,” she says. “And choosing to attend UGA was the best decision I’ve ever made. The university and Athens helped me realize my potential.”

This story first appeared in the Spring 2018 issue of Georgia Magazine.