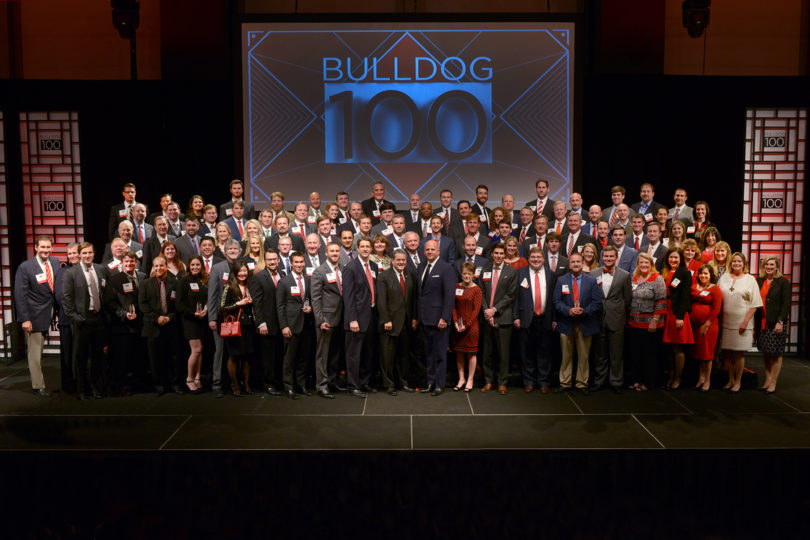 The University of Georgia Alumni Association recognized the 100 fastest-growing companies owned or operated by UGA alumni during the seventh annual Bulldog 100 Celebration Jan. 30 at the Atlanta Marriott Marquis.

The UGA Alumni Association recognized the 100 fastest-growing companies owned or operated by UGA alumni during the seventh annual Bulldog 100 Celebration Jan. 30 at the Atlanta Marriott Marquis.

The 2016 fastest-growing business was SMD LLC, founded by Shane Douthitt and Scott Mondore. Their North Carolina-based talent management and analytics company enables businesses to monetize people management. SMD’s patented cloud-based talent software identifies cause-and-effect relationships between talent management and business outcomes and then converts those analytics into actionable results in just four clicks for front-line managers and individual employees. Both Douthitt and Mondore each earned a master’s and doctoral degree in applied psychology from UGA.

Nominations for the 2016 Bulldog 100 were accepted between February and May 2015. To be considered for the list, each organization must have been in business for at least five years, experienced revenues in excess of $100,000 for the calendar year 2012 and be owned or operated by a former UGA student who owns at least 50 percent of the company or is the CEO, president or managing partner. The Bulldog 100 recognizes the fastest-growing businesses regardless of size by focusing on a three-year compounded annual growth rate.

More than 400 nominations were received for the 2016 Bulldog 100. The class includes companies of all sizes, providing services and products in a variety of industries, including dentistry, law, IT, consulting, retail and pest control. Companies as far west as Texas and as far northeast as New York, made the list this year. The average compounded annual growth rate for this year’s Bulldog 100 businesses was 35 percent.

The 100 businesses and the 153 alumni who lead them were recognized by the UGA Alumni Association during the event. The evening began with an optional roundtable discussion with the Bulldog 100 business owners, led by Bob Pinckney, UGA director of entrepreneurial programs, who was CEO of EvoShield LLC when that business was named the No. 1 fastest-growing Bulldog 100 business in 2011. The roundtable discussion was followed by a reception, dinner and the keynote address given by 1980 UGA graduate Jeff Dunn, CEO and president of C-Fresh, a division of Campbell Soup Co. that includes Bolthouse Farms, Garden Fresh Gourmet and Campbell’s retail fresh soup unit.

To view the complete list of 2016 Bulldog 100 businesses or nominate a business for the 2017 Bulldog 100, see www.alumni.uga.edu/b100. Nominations will be accepted through May 31 at that website.